The last village on the western tip of Khadir island in the Great Rann of Kutch, Dholavira has a population of around 2,500. 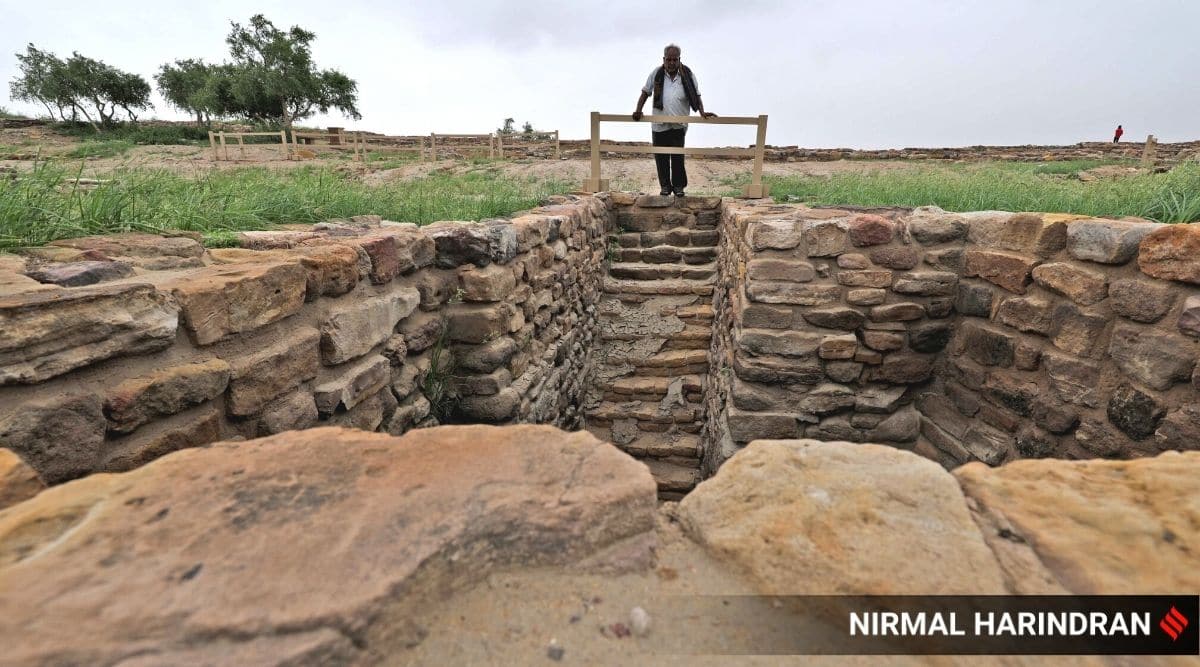 An open groundwell near the Harappan city's premises and presently being controlled by the ASI contains groundwater not safe for drinking, a tubewell on the Harappan city’s premises is the main source of water for the residents of Dholavira. (Express Photo by Nirmal Harindran)

It’s been more than 4,000 years since the end of the Indus Valley Civilization — time that stands still in Dholavira. The Kutch village’s association with the ruins of the Indus Valley city next door that recently got a UNESCO world heritage tag is as much about history as the water tank and tap on its museum premises, which remains its only source of clean drinking water. Through the day, Dholavira women line up to fetch water in pots.

‘Waterholes in a river with a white sand bed’ — that’s the literal meaning of the name Dholavira. However, no one in the village remembers seeing anything close to it, with the seasonal streams between which was once located the Indus Valley settlement rarely ever flowing with water. They know the settlement as ‘Kotdo Timbo (fort mound)’.

The last village on the western tip of Khadir island in the Great Rann of Kutch, Dholavira has a population of around 2,500. The locals joke about the fact that Pakistan, at 40 km, is nearer than the taluka headquarters, Rapar, 150 km away. District headquarters Bhuj is even further — at more than 200 km the longest distance for a village in Gujarat. A long and lonely road, almost taken over by thickets of gando baval (a babool), leads to Dholavira.

Dholavira was discovered in the year 1968. It was excavated around 1990 and 2005. (Express Photo by Nirmal Harindran)

The morning after UNESCO included Dholavira as a world heritage site — the first Indus Valley settlement in India to be thus identified — around two dozen men laze around at the main square, unmindful of the odour of cow dung in the air. “There is nothing here to hurry up for… no work,” says Karman Koli, 37, a mason. “If it doesn’t rain well soon, we might be whiling away time like this for the better part of the year.”

“The nearest petrol pump is in Balasar village, 50 km away. Banks, hospitals and high schools are 100 km away, in Rapar,” says Dipak Sanjot, 32, a tourist guide.

Agriculture and cattle-herding remain the main occupations, not unlike the time of Indus Valley Civilization. As groundwater is salty, much of the agriculture is rainfed. In good monsoon years, farmers grow pearl millet, guar, green gram etc. But such years are rare, and many sell gando baval as firewood for a living. Power supply also remains erratic, becoming worse in the winters.

The last village on the western tip of Khadir island in the Great Rann of Kutch, Dholavira has a population of around 2,500. (Express Photo by Nirmal Harindran)

But it’s drinking water that remains Dholavira’s biggest problem, says Morardan Gadhvi, who runs a provision store. “The groundwater here has TDS (total dissolved solids) higher than 1,000, much above the safe levels. The government laid two pipelines for the Narmada water, but we never got it. Now, they are laying a third pipeline. We hope we will be lucky this time,” he says.

Jilubha Sodha, husband of Dholavira sarpanch Ranuba Sodha, says their main source is a tubewell. “The elevation from Balasar to Dholavira is 100 feet and the Gujarat Water Supply and Sewerage Board is finding it challenging to pump the Narmada water to our village,” he adds.

For about 30 years now, an alternative has been the motor pump installed in a well by the Archaeological Survey of India (ASI) for a museum on the Harappan city’s premises. Sodha admits that even with the limited water it has, the well, which was abandoned by the village but re-dug by the ASI as it excavated the Harappan ruins, is the only source in the area with TDS lower than 1,000.

The morning after UNESCO included Dholavira as a world heritage site — the first Indus Valley settlement in India to be thus identified. (Express Photo by Nirmal Harindran)

Hari Om Sharan, the superintending archaeologist of Rajkot circle, which covers Kutch, declines to comment. But sources say water was one way for the ASI to connect with present-day Dholavira. “The villagers cooperated and even put in labour for the long years of excavation. Letting them draw water is one way of repaying them,” says an official.

Now, the ruins promise another lifeline — that tourists will flock following the UNESCO tag. “We are confident we won’t have to plead repeatedly for good roads, electricity and water now,” Sodha says, particularly optimistic about the under-construction Ghaduli-Santalpur highway.

But, again, time has a way of crawling here. Discovered in 1968, Dholavira was excavated only between 1990 and 2005. A local resident, Shambhudan Gadhvi, and then sarpanch Velubha Sodha kept pressing, villagers say, eventually leading to the excavation that revealed ruins of a city which had a citadel, a middle town, a lower town, reservoirs for fresh water, underground sewerage lines, beadmaking workshops, copper smelters etc.

Ravindra Singh Bisht, the archaeologist who oversaw the excavation, says Dholavira was likely a trade and manufacturing hub from 3000 BC to 1500 BC before climate change forced its residents to abandon it.

While ASI officials refuse to share numbers, sources say Dholavira sees a maximum of 200 tourists a day, during the November-January season when Dhordo hosts the Rann Utsav. The summer months of March to June see hardly any tourists, with the numbers trickling up to 50-odd a day in monsoon. Hoping to encourage tourists, the authorities don’t charge any entry fee.

In the run-up to Dholavira’s inclusion in the UNESCO world heritage list, the Centre released Rs 4 crore for water and sewage connections to the village, and paved street roads.

Ashok Vanra, Superintending Engineer of Kutch zone of the water supply board, says the deadline for the new pipeline to get the Narmada water is January next year.

Dholavira’s main occupation remains to be herding and agriculture. The region highly depends on rainwater due to salty groundwater. (Express Photo by Nirmal Harindran)

Among those looking on silently are 12 farmers whose 72 acres were acquired by the state in early 2000 for the site’s excavation. They moved court against “insufficient” compensation of Rs 3,346 per acre, and haven’t accepted it yet despite losing. “We are proud that Dholavira is now on the world map, but pride doesn’t fill one’s stomach. Our only demand is fair compensation,” says Nagji Parmar, 29.

After the family land came under the excavated site, Nagji has been making a living working as a tourist guide.

Dholavira was likely a trade and manufacturing hub from 3000 BC to 1500 BC before climate change forced its residents to abandon it, said archaeologist Ravindra Singh Bisht. (Express Photo by Nirmal Harindran)

Some tourists are already here trailing the UNESCO news. “After we saw photos of Dholavira on WhatsApp, my friend and I couldn’t resist the 100-km bike ride to here. It amazes me how such a big city could have gone underground,” says Sunil Makwana, 22, who has come from Anandpar village in Rapar taluka. A school dropout who works as a farmer, Sunil adds that he remembers reading about Dholavira in textbooks, “but I don’t remember anything now”.

Gadhvi, who first thought the site had potential and runs a small homestay for tourists, says, “For decades, Kotdo silently kept doing our bidding. Here we are today, witnessing a new dawn for Dholavira.”