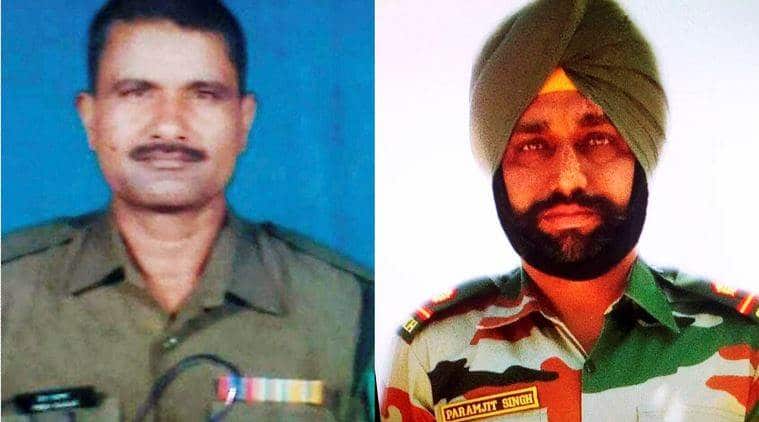 As Army chief General Bipin Rawat reached Srinagar, Home Minister Rajnath Singh met the security brass in New Delhi and was briefed about the ground situation in J&K, especially in the border areas. Union Home Secretary Rajiv Mehrishi and chiefs of intelligence agencies attended the meeting. Incidentally, the attack in the Krishna Ghati sector came the morning after Pakistan Army chief General Qamar Javed Bajwa visited the LoC. The Pakistan Army, on its part, denied any “ceasefire violation” or BAT action. In a statement, the ISPR said “Pakistan Army is a highly professional force and shall never disrespect a soldier, even Indian.”

The Indian Army Northern Command headquarters, in a statement, said: “Pak Army carried out unprovoked rocket and mortar firing on two forward posts on the Line of Control in Krishna Ghati sector. Simultaneously, a BAT action was launched on a patrol operating in between the two posts. In an unsoldierly act by the Pak Army, the bodies of two of our soldiers in the patrol were mutilated. Such despicable act of Pakistan Army will be appropriately responded.” The ambush, intelligence and military sources told The Indian Express, was carefully planned by Pakistani Special Forces to trap the patrol sent out to guard against infiltration below a post codenamed Kirpan-1 in the Krishna Ghati sector. The post, the sources said, was brought under fire at 8.25 am, while the patrol was ambushed by élite troops lying in wait.

Paramjit Singh and Prem Sagar were beheaded after being killed in the ambush, official sources said, in the first incident of its kind since November last year. BSF constable Rajinder Kumar and a fourth, so-far unidentified BSF trooper, suffered injuries in the ambush. The execution-style killings come amidst sharp exchanges of fire in the Krishna Ghati sector.

Official sources said the Monday incident took place when a joint patrol of 10 BSF and Army soldiers was moving between two posts on the LoC. The distance between the two posts is 750-800 metres. These forward posts are part of the deployment of the Nangi Tekri battalion of the Krishna Ghati brigade.

The patrol was moving through a thickly-forested area and was at an approximate distance of 200 metres from the LoC on the Indian side when it was attacked. The Indian side, sources said, retaliated immediately by firing mortars and small arms on Pakistani posts. Firing was on till late Monday evening.

India and Pakistan have been trading fire in Krishna Ghati regularly since March, with the Indian Army and BSF seeking to beat back what officials say are an unusual number of attempts to infiltrate jihadists through the southern stretches of the Line of Control. For its part, Pakistan says India has been seeking to reinforce its LoC defences —part of routine summer activity, that has often led to clashes.

Following the April 17 clash, Pakistan had staged several abortive strikes on Kirpan-1 using conventional means, but had failed to avenge its losses, a senior officer based in Jammu said. “This may have led to pressure in their ranks to carry out this attack.”

Official sources told The Indian Express that this action by the Pakistan Army is a violation of the Geneva Convention. While immediate retaliatory firing has been undertaken by the Army, an appropriate retaliatory action will be a “well thought out and considered course of action”.

BAT action by both armies on the LoC has been a regular feature but it is unusual for the Army to officially acknowledge such action. The Army has been categorical in stating that regular soldiers of Pakistan Army have mutilated the bodies of soldiers as Pakistan tends to blame terrorists for such action.

Élite special forces assaults of these kinds are often reported to have been carried out by border action teams, units purported to contain both irregular combatants and soldiers. However, Indian intelligence sources said the attacks are likely carried out by members of Pakistan’s Special Services Group.

Fighting has flared this summer after several months of relative quiet, following the cross-LoC strikes ordered on jihadist “launch pads” in September. Though military commanders on both sides had moved to limit the fighting, Pakistan has resumed targeting Indian works on the LoC, which include reconstruction of stretches of fencing that are brought down by snowfall in the winter.

India has also moved to aggressively act against infiltration, fearing that even limited numbers of fighters from groups like the Lashkar-e-Taiba and Jaish-e-Muhammad could give badly-needed training and operational skills to dozens of new ethnic-Kashmiri recruits.