UN Secretary-General Antonio Guterres said in Islamabad Sunday that it was important for India and Pakistan to de-escalate “militarily and verbally” and exercise “maximum restraint”. Hours after UN Secretary-General Antonio Guterres said he was ready to help if India and Pakistan agreed, India underlined that there is “no role or scope for third party mediation” on the Kashmir issue.

Guterres said in Islamabad Sunday that it was important for India and Pakistan to de-escalate “militarily and verbally” and exercise “maximum restraint”. “I offered my good offices from the beginning. I am ready to help if both countries agree for mediation,” the UN chief said, as he began a four-day visit to Pakistan.

In response, the Ministry of External Affairs spokesperson Raveesh Kumar said: “India’s position has not changed. Jammu & Kashmir has been, is and will continue to be an integral part of India. The issue that needs to be addressed is that of vacation of the territories illegally and forcibly occupied by Pakistan. Further issues, if any, would be discussed bilaterally. There is no role or scope for third party mediation.” 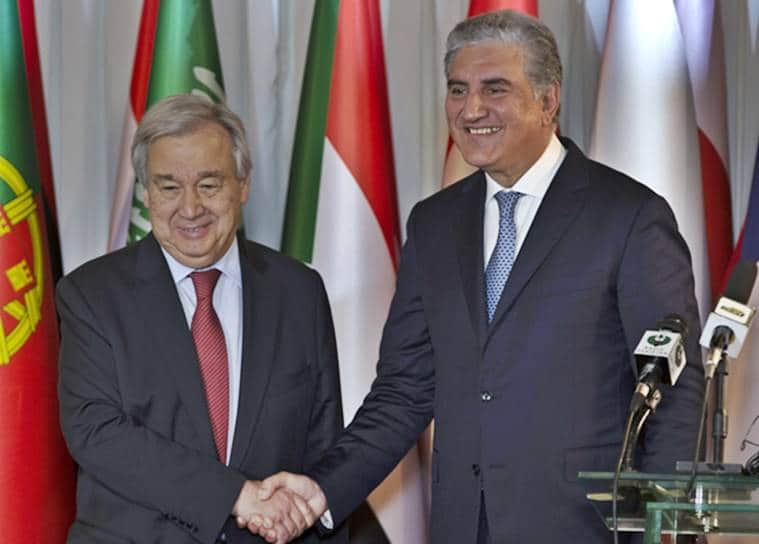 Kumar said: “We hope the UN Secretary-General would emphasize on the imperative for Pakistan to take credible, sustained and irreversible action to put an end to cross-border terrorism against India, which threatens the most fundamental human right — the right to life, of the people of India, including in J&K.”

Usually, the UN chief doesn’t wade into the Kashmir dispute, and it is rare for the Indian government to comment on the Secretary-General’s statements. New Delhi has, in the last six months, made it clear to the US as well that there was no role for third-party mediation, while responding to US President Donald Trump’s offer.

Addressing a press conference after meeting Pakistan Foreign Minister Shah Mahmood Qureshi, the UN Secretary-General said he was “deeply concerned” over the situation in J&K and tensions along the LoC. “Diplomacy and dialogue remain the only tools that guarantee peace and stability with solutions in accordance with the Charter of United Nations and resolutions of the Security Council,” Guterres told reporters.

He said that he had “repeatedly stressed the importance of exercising maximum restraint”. “UNMOGIP (UN Military Observers Group in India and Pakistan) should be given free access. It is already there on the Pakistan side, and it should also be given on the other side,” the UN chief said.

“We have taken a position that UN resolutions (on Kashmir) should be implemented, there should be ceasefire (on LoC) and human rights should be respected,” he said.

India maintains that UNMOGIP has outlived its utility and is irrelevant after the Simla Agreement and the consequent establishment of the LoC.

During his visit, the UN chief will attend an international conference on Afghan refugees and visit Gurdwara Kartarpur Sahib. Guterres is also expected to meet President Arif Alvi and Prime Minister Imran Khan.

While calling the Kartarpur initiative a “symbol of interfaith harmony, a unique experiment in cross-border ties”, the UN chief said the opening of the corridor showed “Pakistan’s commitment to peace”.

(With PTI in Islamabad)