Russia's cumulative investment in the Indian economy exceeded USD 4 billion, and Indian investment in Russia is USD 8 billion. "All these facts show that Russian-Indian economic cooperation is returning to a growth trajectory," Putin said. 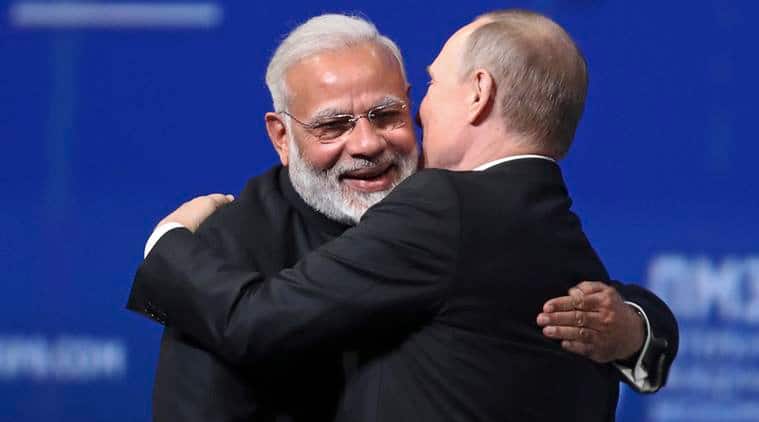 India and Russia have agreed to set up joint ventures for manufacturing aircraft and automobiles as the two nations look to boost trade and economic ties. Russian President Vladimir Putin, after summit talks with Prime Minister Narendra Modi yesterday, said Russian-Indian economic cooperation is returning to a growth trajectory. “We both have a stake in consolidating this positive trend,” he said. “Our talks are always held in a warm and friendly atmosphere, and are always substantive and productive. This time was no exception.”

Putin said agreements made in the St Petersburg Declaration outlines steps to further deepen bilateral cooperation in the political, economic and cultural spheres. “Encouraging the growth of trade, improving its structure, and expanding industrial cooperation constitute our key priority,” he said.

Bilateral trade, he said, was declining in recent years but has reversed this year. It rose by 29 per cent in the first quarter of 2017.

“As of today the sides have agreed a list of 19 projects aimed at establishing joint ventures for transport infrastructure, new technology, including pharmaceuticals, aircraft and automobile manufacturing, the diamond industry, and agriculture,” he said without giving details.

After summit talks, the two leaders witnessed the signing of an agreement on intellectual property, a master framework agreement on building two units at the Kudankulam nuclear power plant, a programme of bilateral cultural exchanges for 2017–2019, an agreement on a feasibility study for a high-speed link between Nagpur and Secunderabad, and a memorandum on cooperation between joint stock company ALROSA and India’s Gem and Jewellery Export Promotion Council.

“All these facts show that Russian-Indian economic cooperation is returning to a growth trajectory, and we both have a stake in consolidating this positive trend,” Putin said.

Putin said the cooperation is not limited to direct supplies of the latest Russian military equipment to India. “The assembly of high-tech military products has been set up in India with Russia’s participation. We agreed with the Prime Minister to continue to jointly develop and manufacture modern weapons systems.”

At the CEO forum that immediately followed the Summit discussions, Putin said over the past seven decades, first the Soviet Union and then Russia built steel works, power stations, chemicals plants, gas pipelines, agribusiness facilities, and transport infrastructure in India. “We in Russia are proud of this capital we have developed together,” he said.

He said it was important to move from simply trading goods to more sophisticated forms of cooperation. “We invite our partners to localise production in Russia. We know Prime Minister Modi’s idea regarding projects in India in areas where we can support each other and exchange modern technology. We can do this on a bilateral basis, of course, in areas where we are competitive at the global level.”

Businessmen of the two nations can create new, high value-added products and build production chains, including for promoting their goods and services on third country markets, he said. “On the agenda we have the launch of promising joint projects in fundamental areas for the economy and high-tech sectors such as nuclear energy, the aerospace sector, and biotechnology. We need to look to the future, and the future is about harnessing the common powerful scientific and technical potential of both countries.”

Russia’s market, he said, today offers every opportunity for carrying out the boldest business initiatives. “We continue to improve our investment and business mechanisms, including with respect to foreign companies and citizens. We will use modern market instruments to stimulate growth in the high-tech sectors.”