India-Pakistan tension: The Indian Air Forces expressed its happiness over the release of Abhinandan and said that his release is in consonance with the Geneva Convention.

Prime Minister Narendra Modi chaired a high-level meeting on security amid the heightened tensions with Pakistan.

India-Pakistan tension LIVE News: Hours after Pakistan Prime Minister Imran Khan announced that the captured IAF Wing Commander Abhinandan will be released tomorrow as a “peace gesture”, the Indian Air Forces expressed its happiness over the development and said that his release is in consonance with the Geneva Convention.

In a joint presser by the armed forces, the IAF also said there is enough evidence to show that Pakistan used F-16s to target Indian military installations in this mission. Pakistan has denied that F-16 was part of the operation–any such admission would violate US sale conditions of not letting Pakistan use F-16s in an offensive role.

India on Tuesday conducted non-military preemptive air strikes on a terror camp in Balakot. A day later, Pakistan Air Force aircraft (PAF) violated Indian airspace in J&K and attempted air strikes but caused little damage on the ground as the bombs fell in uninhabited areas near military installations. In the process of thwarting the PAF’s intrusion, the IAF lost a MiG-21 Bison–its pilot Abhinandan Varthaman, who ejected across the Line of Control, after bringing down a Pakistani F-16 during the aerial confrontation to repel the Pakistani attack.

Tensions between Indian and Pakistan are high as IAF pilot Abhinandan Varthaman is under Islamabad's custody. Read highlights in Tamil

Under section 3 of Unlawful Activities (Prevention) Act, 1967, Central Government declares the Jamaat-e-Islami (JeI), Jammu and Kashmir as an "unlawful association".

Union Minister Ravi Shankar Prasad said the government had sent a notice to YouTube to take down "humiliating videos" of Wing Commander Abhinandan Vardhaman, captured by the Pakistan army. "We had received complaints that an unfortunate instance had come up where humiliating videos of the Wing Commander (Abhinandan) had been uploaded on YouTube from Pakistan side. We had sent a notice to YouTube and complying with the same they took down 11 such videos," he said.

"In the light of the situation prevailing in the country today we expect the social media platforms to ensure that they should not allow their platform to be abused by content which is designed to weaken the morale of the country," he further said.

In a media briefing, Union Minister Arun Jaitley said the Union Cabinet approved the Jammu and Kashmir Reservation (Amendment) Ordinance, 2019. "Once the Ordinance is issued, it would pave the way for bringing persons residing in the areas adjoining International Border within the ambit of reservation at par with persons living in areas adjoining Actual Line of Control," he said. 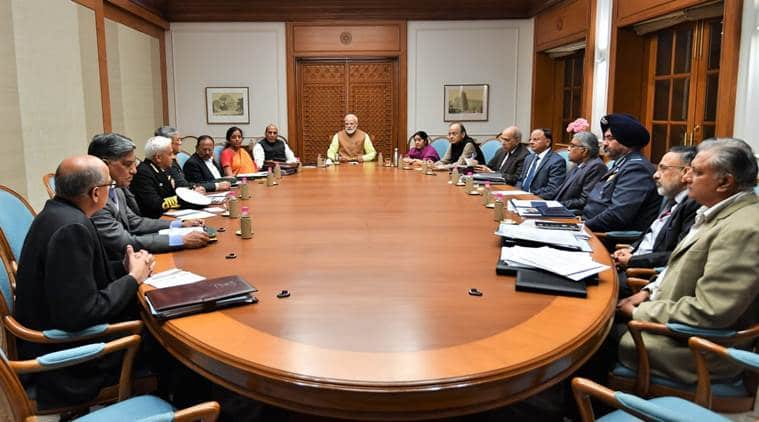 Visuals of cover of AARAM missile fired from Pakistani F-16 aircraft found near the LoC in India pic.twitter.com/qHdOm5cDqN

Air Vice Marshal RGK Kapoor said there is enough evidence to show that F-16s were used in this mission through their electronic signatures. "Parts of AMRAAM, air to air missile which is carried only on the Pakistani F-16s was recovered east of Rajouri within the Indian territory," he said. Pakistan, however, had claimed that no F-16 was part of the operation--any such admission would violate US sale conditions of not letting Pakistan use F-16s in an offensive role

In a joint presser by the Indian armed forces, Air Vice Marshal RGK Kapoor said that the IAF is happy that Wing Commander Abhinandan is returning tomorrow.  He also said that one Pakistani F-16 was shot down by an IAF MiG 21 Bison Aircraft., adding that parts of F-16 have been recovered, inside Indian territory.

Air Vice Marshal RGK Kapoor: One Pakistani F-16 was shot down by an IAF MiG 21 Bison Aircraft. East of Rajouri, parts of F-16 have been recovered, inside Indian territory. Also, IAF is happy that Wing Commander Abhinandan is returning tomorrow

Air Vice Marshal RGK Kapur: There have many factually incorrect statements made by the Pakistan Air Force. Earlier, they said they had the custody of two IAF officers. Later in the evening, they retracted the statement and said only officer is under their custody

WATCH: Joint press briefing by the Army, Navy and the Air Force in New Delhi https://t.co/SooRKNi5T1

Pak PM has exhibited real statesmanship today. It is time for our political leadership to step up & take measures to de escalate the current situation. People of J&K are living under unimaginable duress. How much longer will we suffer for?

Very glad to know that #WingCommandarAbhinandan will be heading home. I’ll wait for him to be back on Indian soil before I welcome him back but I’m greatly relieved that PM @ImranKhanPTI has announced the imminent release of our pilot.

Joint press briefing by Army, Navy and Air Force in New Delhi that was scheduled for 5 pm today has been postponed to 7 pm, ANI reported

The IT Ministry has asked YouTube to remove 11 video links pertaining to Wing Commander Abhinandan Varthaman, who was captured by Pakistan during an air combat on Wednesday, according to sources. The ministry had asked YouTube to remove the clips following directive from the Home Ministry, a government source said, adding that the said links have now been removed. PTI

Sources: Pakistan indulging in war hysteria. India not going to get drawn into it, we want credible, verifiable action against terrorists, their proxies, infrastructure and cross border terrorism. @IndianExpress

Rubbishing Pakistan’s narrative that IAF air strikes in Balakot did not hit the targets, the government sources insisted that strikes were 100 per cent on target. In the pre-dawn hours of Tuesday, India had carried out “pre-emptive” strikes against “biggest training camp” of JeM in Balakot in Kyber Pakhtunkhwa, in which “a very large number” of JeM terrorists and their trainers were “eliminated”.

In the ongoing crisis, New Delhi has adopted a four-pronged approach with Pakistan. First, India accused Pakistan Air Force of targeting “Indian military installations” and summoned Pakistan’s Acting High Commissioner on Wednesday afternoon to lodge a “strong protest” at what it called its “unprovoked act of aggression” including “violation of the Indian airspace.” Second, India called Tuesday’s Balakot strike a non-military “anti-terror” pre-emptive strike and labelled it as a “counter-terror strike”.

Third, Delhi told the Pakistan envoy that “India reserves the right to take firm and decisive action to protect its national security, sovereignty and territorial integrity against any act of aggression or cross-border terrorism.” And, lastly, India handed over a “dossier” to Pakistan with specific details of Jaish-e-Mohammad’s complicity in the Pulwama terror attack and the presence of its terror camps in Pakistan.

Read | Highlights on tension between India and Pakistan

India also objected to Pakistan’s "vulgar display of an injured personnel" of the IAF. It also called for his immediate return. “It was made clear that Pakistan would be well advised to ensure that no harm comes to the Indian defence personnel in its custody. India also expects his immediate and safe return,” the MEA said.

Explained: Plight of pilot is X-factor as govt plans next steps

Meanwhile, the global community has asked both the countries to show restraint. The US and EU asked Pakistan to take action against terrorist groups after France and Australia had done the same Tuesday. While France, UK and US on Wednesday called for “de-escalation” in their statements, Russia and China asked for exercising “restraint”.

The European Union also said on Wednesday that it expected both countries to exercise “utmost restraint” and “avoid any further escalation of the situation”.

France on Wednesday was the first to call on the two countries for “de-escalation”, as it was concerned about the deterioration of the situation. British PM Theresa May said that the UK is deeply concerned about rising tensions between India and Pakistan and urgently called for “restraint” on both sides to “avoid further escalation”.