J&K: ‘They said India caused them damage, will bury the dead and take revenge’

Standing on a mountain, Silikote, a hamlet of 22 households, is overlooked by Pakistani army pickets across a ridge and is vulnerable even to small-arm fire from Pakistan. 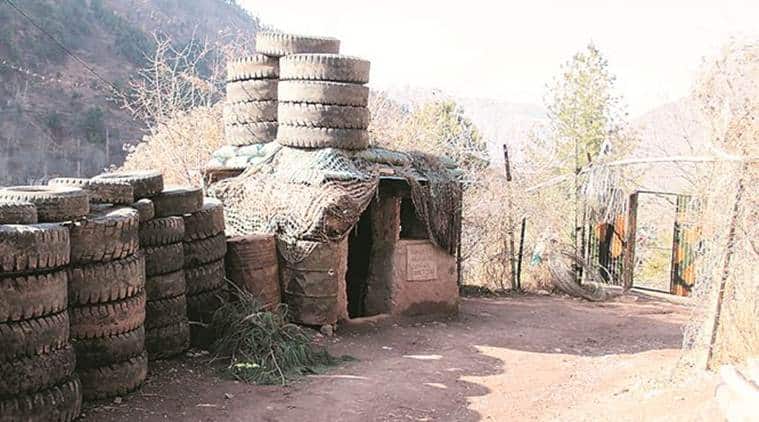 THE LONG winding road to Silikote, a village on the Line of Control (LoC), is desolate. An iron gate, the only entry point to the village, is shut. The Army bunker in front of the gate is empty as the soldiers have shifted to underground bunkers.

As Ghulam Nabi Handoo wants to enter his village, an Army officer comes out of his bunker and asks him to go back. “They (Pakistan army) can open fire any time,” he says, gesturing to Handoo to return. “We can’t let you in.”
On Sunday morning, Handoo was the last man to leave the village after the Pakistani army made “another announcement asking the people of Silikote to vacate their houses”. The villagers say the announcement was first made from the village adjacent to Silikote on Saturday. It was repeated on Sunday morning from villages adjacent to Silikote and Churanda.

“I heard it (the announcement) myself,” says Farooq Ahmad Kalay, an ex-serviceman living just outside Silikote. “They (suspected Pakistan soldiers) were saying India has caused damage to them. They will bury the dead and will take revenge after that. They said the Muslims should vacate their houses.” Standing on a mountain, Silikote, a hamlet of 22 households, is overlooked by Pakistani army pickets across a ridge and is vulnerable even to small-arm fire from Pakistan. For the past five days, the village has been continuously hit by shells fired by the Pakistan soldiers. “We have witnessed such intense shelling for the first time since 1999,” says Handoo. “We are lucky to be alive.”

Since Saturday evening, Silikote has been calm but tense. All residents have left for Uri town where government has set up a camp for those from border villages. More than 500 villagers from Silikote, Balkote, Hathlanga, Sohra, Churanda, Tilawari and Batgra villages are living in the temporary shelters set up at Uri town by the government. At the Government Girls Middle School in Uri, more than 50 women and children are huddled in a 15×15 feet classroom.

“How long will we live like this,” asks Naseema Begum, a resident of Churanda. Naseema and her family shifted to the camp on Sunday morning after the announcement from Pakistan side. “We are dying every day. Is this life?” says Nazir Ahmad, from the same village. “Life there is hell. I think around 20,000 mortars were fired in an hour.”

Before the 2003 ceasefire declared by India and Pakistan, shelling in the border villages of Uri was routine. The villagers had set up underground bunkers and would huddle inside. “Because of the ceasefire, the borders were calm and we didn’t feel need for those bunkers,” says Rafiq Ahmad, 35, of Churanda. “Then there was the 2005 earthquake and those bunkers were damaged. Now we are living at the mercy of god.”

On Sunday, the LoC in Uri was silent but the villagers say they would not return to their houses. “The Army pickets are inside the village (Churanda). There is an Army bunker outside my house. So even if Pakistan targets only that bunker, my house is bound to be hit,” says Nazir Ahmad. “We just want one thing now. Give us a small plot of land at some safer place and we would shift there. We don’t want to live in this atmosphere of fear every day.”