20 years after Kargil: ‘Even today when soldiers die in Kashmir, I feel same anger and pain when I lost Vikram’

The Indian Army successfully captured Point 4875 which was named ‘Batra Top’ in his honour. 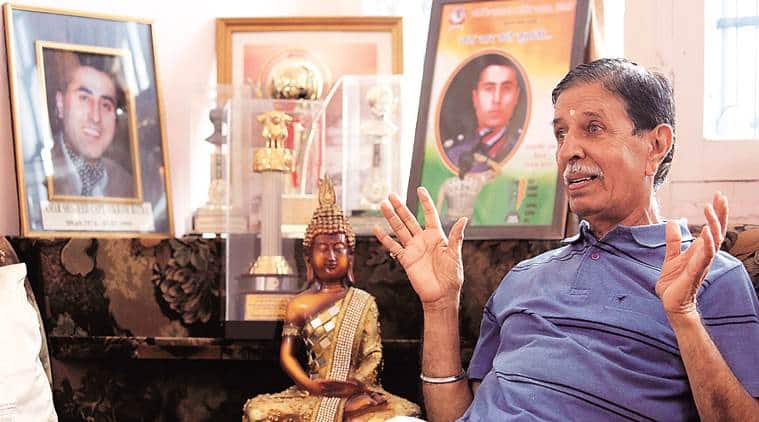 5 July 1999: Dear Kushu, Received your affectionate letter yesterday only. I am sitting at a very high altitude and ready for my task… The situation here is improving but don’t know how much time it will take, but our Army is doing a fantastic job here. Keep doing your bit faithfully and sincerely. God is looking at everyone and he will definitely reward one day… Yours. Luv…

Twenty years have passed and these last words from his identical twin brother still bring a sense of pain as well as relief to Vishal Batra, 44, alias Kush.

“I received his July 2 letter the next day. He had asked to me to reply to his earlier letters and also if they were reaching me. I wrote back immediately and posted my reply on July 4. I am so thankful to God that he received, read and even replied. Had he not received my letter, there would have been a heaviness in my heart for life. He would have died thinking I did not reply to his letters. I would have never forgiven myself,” says Vishal.

Vikram’s (alias Luv’s) last letter, dated July 5, reached Vishal only on July 27, twenty days after he was killed in the war. “It has been 20 years, but my own face doesn’t let me forget him. I swell with pride when people say I look like him,” says Vishal. 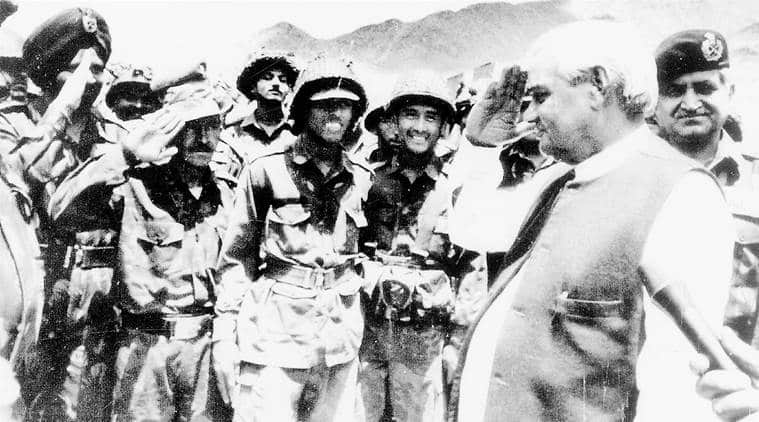 Decorated with Param Vir Chakra posthumously, Captain Vikram Batra of the 13 JAK Rifles first captured Point 5140 in Drass sector at an altitude of 16,962 feet above sea level with his company on June 20, 1999. In a daredevil assault, he pounced on the enemy and killed four of them in a hand-to-hand fight. It is after this that he famously said, ‘Ye dil maange more…’ Then on July 7, in another operation to capture Point 4875, he killed five enemy soldiers in a hand-to-hand fight. Despite sustaining grave injuries, he crawled towards the enemy, hurled grenades to clear the position and achieved a near-impossible military task in the face of heavy enemy fire. While rescuing one of his injured colleagues, he bravely took enemy fire and attained martyrdom at the age of 24.

The Indian Army successfully captured Point 4875 which was named ‘Batra Top’ in his honour.

It has been 20 years, but his father Girdhari Lal Batra’s (75) tears haven’t dried. His mother keeps Vikram’s memories alive, dusting hundreds of his photographs and other belongings. 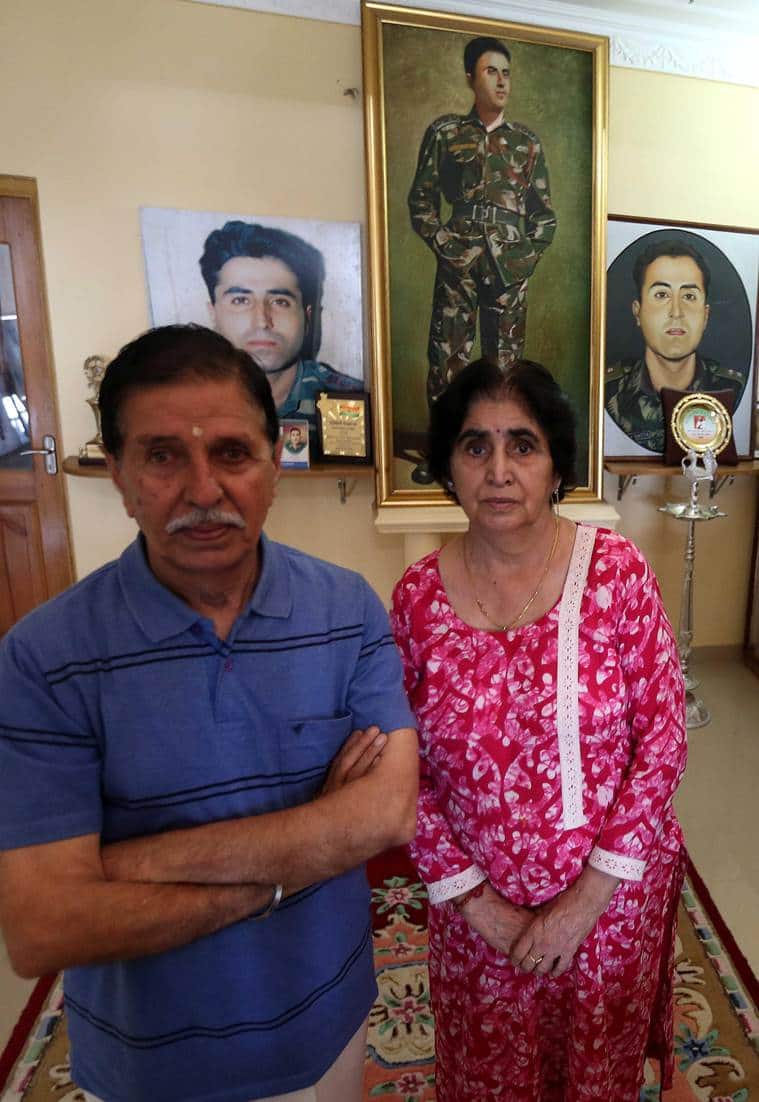 Captain Vikram Batra’s parents at the in-house museum dedicated to him at their Luv-Kush Niwas in Palampur. Express photo: (Express photo by Gurmeet Singh)

At ‘Luv-Kush Niwas’, their residence at Palampur in Kangra, Himachal Pradesh, Girdhari Lal remembers the day he received Param Vir Chakra on behalf of his son. “When we were returning to the hotel, I broke down. I told Vishal that this day would have been something else if Vikram had received this honour himself.”

“Our son has given us reasons to be proud even in his death. For 20 years, all the respect we have received from the society is because of him. But this pain will never go. He was our Kohinoor…”

Girdhari Lal also remembers Vikram as his “best buddy” who never hid anything from him. “In 1995, he took admission in MA English at Panjab University in Chandigarh. The purpose was to get a hostel room as he was preparing for the Combined Defence Services exam. There he met the love of his life …he called me to say he was in love.”

The wheels of time haven’t moved for his fiancée. Requesting privacy for her, Girdhari Lal adds, “She is in touch with us and has not married. She says Vikram’s memories are enough for her…she is like our daughter. She still breaks down when she talks about him.”

The two were to get married on Vikram’s return from Kargil.

Girdhari Lal says that after successfully capturing Point 5140, Vikram called him over a satellite phone. “He said ‘Daddy I have captured’. I misunderstood as Captain Saurabh Kalia had been captured by Pakistanis and he immediately sensed the worry in my voice. Then he said, ‘Don’t worry I have recaptured Point 5140…’. Relieved, I said, I am proud of you my son…”

Vishal, who recently visited Point 4875 with the Army’s help to pay tributes to his brother, called his parents from there. “They were very happy, but I said I wish this call had been made by Vikram that day (July 7, 1999),” he says.

Vishal recounts his last meeting with Vikram on March 9, 1999 when the latter returned from commando training. “He showed me his bruised back. Our favourite movie was Prahaar and I asked him if the training was akin to what was shown in the film. He said it was not even a tenth of the actual training,” says Vishal.

Also Read | Air Marshal R Nambiar: ‘We were very innovative in Kargil War, we fought with what we had’

Vikram was also selected for Merchant Navy but decided not to join a day before reporting. His mother Kamal Kanta Batra (73) recalls, “He was selected for Merchant Navy. Everything from uniforms to packing was ready. A day before joining, he asked me, ‘Mumma, aapko paison ki zarurat hai? (Mother, do you need money?). I said no Vikram, both your father and I are earning. Then he said that he doesn’t want to join Merchant Navy. He said, ‘I will earn money in Merchant Navy but I don’t want money, I want to do something for the country. I want to join Army’.”

The Batras say they have just one wish. 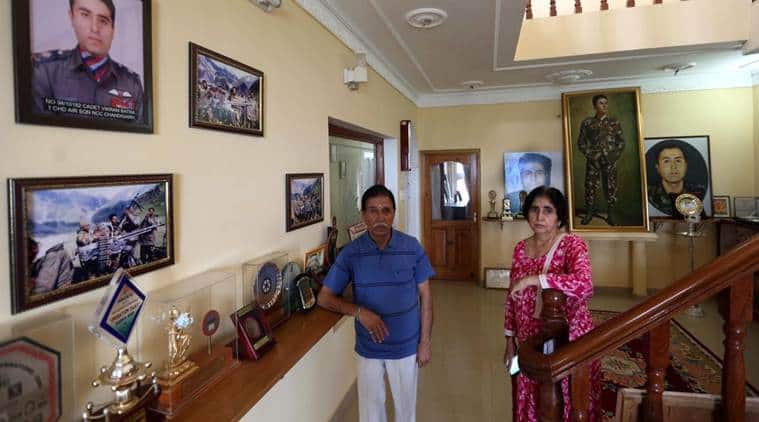 “The government should not let memories of Kargil heroes die. They should be kept alive forever and younger generations should be told about them. Even today when soldiers die in Kashmir, I feel the same anger and pain that I felt when I lost Vikram. We must give a befitting reply to Pakistan so that they do not dare to do any nuisance again. This anger against Pakistan is not going to die ever,” says his father.

‘Luv-Kush Niwas’ is abound with Vikram’s memories. “We got all his photos framed. It is now a habit to look at his smiling face all around us…,” says Girdhari Lal.

Unit formed in ’80s to tackle gangs to be given new tasks, Mumbai Police revives its Special Operations Squad