In a video message released by the MEA on the attack anniversary, Prime Minister Narendra Modi, paying homage to the victims, said today’s India is combating terrorism with a “new policy and new ways”. 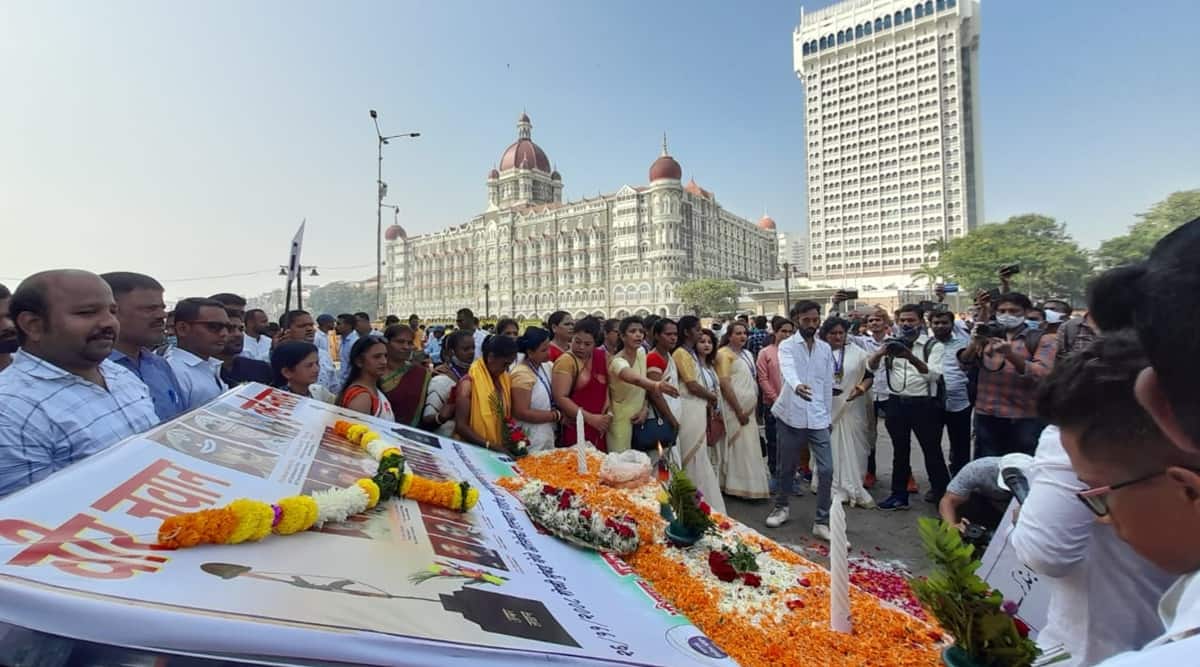 People gather near the Gateway of India in Mumbai to pay tribute to 26/11 martyrs on Friday. Express photo by Pradip Das.

India cannot forget the wounds of 26/11, Prime Minister Narendra Modi said Friday on the 13th anniversary of the Mumbai terror attacks. During the day, the Ministry of External Affairs summoned a senior diplomat of the Pakistani High Commission and conveyed that Islamabad must ensure an expeditious trial in the case.

In a note verbale handed to the diplomat, the MEA asked Pakistan to abide by its commitment to prevent terror strikes against India from territories under its control, it said.

In a video message released by the MEA on the attack anniversary, Prime Minister Modi, paying homage to the victims, said today’s India is combating terrorism with a “new policy and new ways”.

In a statement, the MEA said: “It is a matter of deep anguish that even after 13 years of this heinous terror attack, the families of 166 victims from 15 countries across the globe still await closure, with Pakistan showing little sincerity in bringing the perpetrators to justice.”

India has been pressing Pakistan to punish those involved in the attacks but the trial of the accused persons has made little headway so far.

The MEA asserted that the terror attack was planned, executed and launched from Pakistani territory. “We once again call on the government of Pakistan to give up double standards and to expeditiously bring the perpetrators of the horrific attack to justice,” it said. “This is not just a matter of Pakistan’s accountability to the families of the innocent victims who fell to terrorists, but also an international obligation.”

The statement said India will continue to make every effort to seek justice for the families of the “victims and the martyrs” of the attack.

On November 26, 2008, a group of 10 Pakistani terrorists carried out coordinated attacks on a railway station, two luxury hotels and a Jewish centre after sneaking into India’s financial capital through the Arabian sea. As many as 166 people were killed in the nearly 60-hour assault that sent shockwaves across the country.

In November 2012, Ajmal Amir Kasab, the lone surviving gunman among the Pakistani group, was hanged to death in Pune’s Yerawada Jail.