The court said the government was free to take action against GPIS in future if it found violation of FCRA norms. 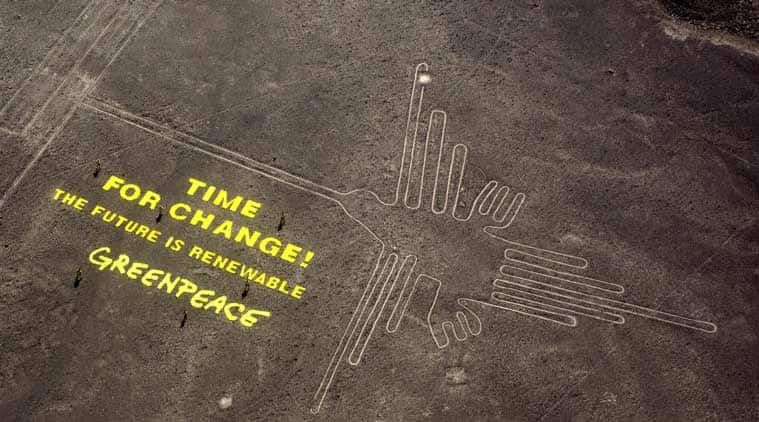 FILE – In this Dec. 8, 2014 file photo, Greenpeace activists stand next to large letters that spell out “Time for Change: The Future is Renewable” next to the hummingbird geoglyph in Nazca, Peru. (Source: AP)

The Delhi High Court on Tuesday directed the government to remove the freeze on the IDBI Bank account of Greenpeace India, which has foreign contribution of Rs 1.87 crore from Greenpeace International. The court observed that the government had not brought any “evidence on record” to support its action of freezing the account.

“According to me, there is no material on record to restrict the petitioner from accessing the bank account with the IDBI Bank in Chennai,” said the court of Justice Rajiv Shakdher. It said that the “amount in fixed deposited
in the bank be unblocked and transferred to the NGO’s account”.

The court took note of the submissions made by the Ministry of Home Affairs, which had alleged that the “foreign funds” had been contributed by Greenpeace International, which was on its watchlist, but observed that the ministry’s directions to freeze the account had been given before any notice was issued to the NGO.

“How do you respond to the NGO’s allegation. At least, you should say something. First you freeze the account then you investigate the case, which is very, very uncommon,” observed the court, adding that the ministry had not been able to show on record any evidence that the NGO had been engaged in activities that went against national interest.
“NGOs are entitled to have their viewpoints,” said the court, adding that the NGO cannot be accused of acting against national interest “merely because its views do not match the government’s viewpoint”.

The court also noted that the directions to the bank to freeze the accounts were “arbitrary” as the government had not been able to prove its stand.

The court, however, said the government was free to take action against Greenpeace India in future if it found violation of Foreign Contribution Regulation Act (FCRA) provisions.

The court order came during hearing of a petition filed by Greenpeace India, which alleged that the government had taken action “without any rhyme or reason and without complying with the provisions of FCRA”.

The home ministry had directed the Reserve Bank of India in June 2013 to take prior permission of the ministry’s FCRA department before clearing any foreign aid to Greenpeace India from Greenpeace International and Climate Works. The order resulted in blocking the direct funding of the NGO from abroad since each transaction had to be cleared on a case-to-case basis by the RBI.

During the proceedings, the government’s standing counsel Jasmeet Singh opposed the NGO’s contentions and said the home ministry had a problem with the donor, Greenpeace International, which was on its watchlist.
Greenpeace India advocate Sanjay Parikh had argued that the “uncommunicated and illegal prohibition imposed by MHA in not allowing credit of the foreign funds in the petitioner’s FCRA Bank Account” had “violated the rights of Greenpeace”.

SP olive branch to BSP: ‘Together we can wipe out BJP’