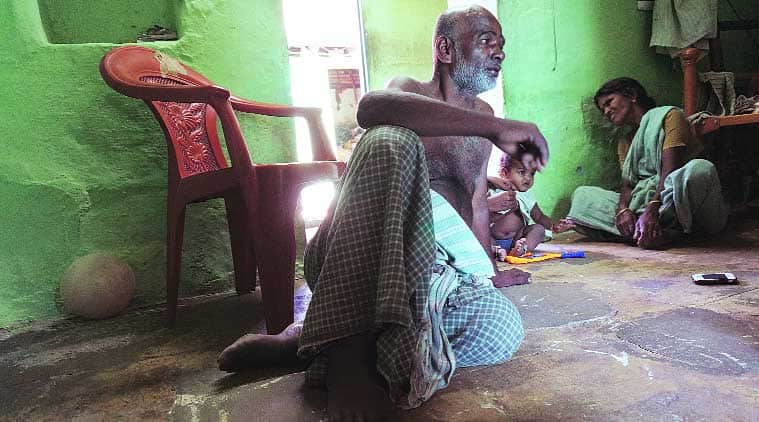 P Ponnaiah’s father Sellaiah says he would have been alive if police had acted on his complaint. The murder had led to tension in the area. (Source: Express Photo by Arun Janardhanan)

On March 20, Tamil Nadu DGP Ashok Kumar flew down to Tirunelveli and Tuticorin districts for a meeting with senior police officers. In talks lasting six hours, Kumar expressed concern that the series of murders in the two districts had affected the image of the state police, once considered among the best in the country.

He was referring to killings in the districts over the past one year. The accused in most cases were Thevars or those belonging to other powerful classes such as Vanniyars and Gounders. The killed were mostly Dalits.

NGOs and activists put the total number of such murders at over 100. A senior police officer said more than 30 of these murders had a direct caste angle and at least 65 per cent of those killed were Dalits.

The opposition parties and Dalit groups have been demanding a CBI probe into the murders. In January, the Puthiya Tamilagam filed a PIL in the Madras High Court seeking an SIT probe and deployment of paramilitary forces.

L Mahesh, 33, could have been mistaken for a Tamil politician, with his black trousers, his white shirt with the top two buttons undone, and the gold chain around his neck. He was the member of a small Dalit outfit called Mallar Meetpu Kalam, founded by an NRI, and was seen by the locals as their voice against the Thevars.

On October 28, 2014, as Mahesh stood by the roadside with friends, an armed gang carrying sickles accosted them, and hacked him to death. Mahesh was newly married.

Six people have been arrested, but Mahesh’s relatives say they are not the real culprits. “No chargesheet has been filed. We suspect police have randomly picked up people. His cellphone with details of the person who called him last is still with police,” says his uncle Sivasubramaniam.

P Ponnaiah, who got killed by a suspected Thevar gang in February, was an auto driver. He had a dispute with two of his colleagues, belonging to the dominant community.

“He filed a complaint but police did not act. If police had acted, the issue would have been settled,” says S Sellaiah, 62, Ponnaiah’s father, belonging to the Konar community.

On November 28, 2014, S Gomathi, 34, had just reached home in Tirunelveli with her husband after attending a wedding when he got a call and went out. An hour later, she received the news that he had been murdered.

Gomathi says it was her husband’s battle against moneylenders that claimed his life. Last June, he had been attacked by a gang at the Government Hospital near Tirunelveli. “If police had taken action then, he would not have been murdered,” weeps Gomathi. The two had got married 10 years ago against much parental pressure as she belongs to a dominant caste.

Talking about the pressure they work under, a junior police officer says caste Hindu groups openly challenge them saying “even the Chief Minister belongs to our caste and nobody can touch us”. A senior officer adds, “None of the SPs wants to act or arrest the actual troublemakers as they are the ones with strong political links.”

Another police officer, who has served in the Tirunelveli area, says that even if the murders don’t have a caste angle, it plays a role in the investigations. “Most of these murders could have been prevented by early intervention. But officials either ignore complaints from Dalits or inform the culprits about there being a complaint, sometimes leading to the murder.”

Families of victims claim that police officers delay probes, destroy evidence, even hold off postmortem reports. Those who dare challenge local officers before higher-ups are intimidated with threats.

Before his murder, Mahesh had filed several complaints and was demanding registration of a case under the SC/ST Prevention of Atrocities Act after a Dalit boy was attacked by caste Hindu youths. “Finally he succeeded, but the culprits are still out. We are probing this angle,” an officer said.

According to a senior officer, recruitment of Thevars and other dominant castes into the police force started in the early 1970s. “Now most of the powerful politicians of the DMK and AIADMK are Thevars. Jayalalithaa is known for giving them important positions. Her confidante Sasikala and present Chief Minister O Panneerselvam are all Thevars,” he says.

Retired Madras High Court judge Justice K Chandru says this is a violation of a government order that no police officer belonging to a dominant community of the area be posted in a station falling within the area. “Unfortunately, during MGR’s period, the stand was given a go-by. It is high time the old policy was restored. Otherwise local police will regularly take sides on caste lines,” he says.

Puthiya Tamilagam president K Krishnasamy says while caste conflicts are not new to the region, professional killers are now being hired.

SP V Vikraman, who recently took charge of Tirunelveli district, says they have started a Fellow Police system. “We have introduced a complaint number and, in the last one week, registered 19 cases and arrested 33 based on complaints made on this number.”