The bird warriors of Satajan

As government sits on their demand to declare wetland as sanctuary, these Assam villagers take up the task of protecting migratory birds from poachers. Villagers claim 25 species of birds are spotted in this wetland.

Baliram Gogoi is a busy man. The 78-year-old wakes up around 4.30 am despite the cold, takes a stick and his mobile phone, and makes a round of Satajan, a 270-bigha wetland on the banks of the Ranganadi here, checking if any poacher had got closer to trap a bird.
Satajan is one of the few surviving wetlands — under severe threat — in Lakhimpur district in eastern Assam, which can boast of birds, both migratory and local. Although the government is sitting on a proposal for the past one year to declare Satajan, about 390 km from Guwahati, a bird sanctuary, Baliram and fellow villagers are already on the job, protecting the birds — some of them rare species — from poachers.

“Satajan is not only home to so many species of birds but is also a destination for several migratory species,” said Baliram, a farmer who was earlier associated with the district unit of the Village Defence Organisation, a body formed during the Chinese aggression of 1962 to help villagers. “But the problem is that the government does not seem interested in saving this wetland. We have submitted several memorandums, including to our Lok Sabha member who is a central minister. But there has been no response,” he said, referring to Sarbananda Sonowal.

At Satajan, Baliram slowly gets down from his bicycle, and first begins to whisper the do’s and don’ts in a bird sanctuary, and then takes you away from the wetland to tell you about the different species of birds. “We have at least 25 species of birds here right now. This year at least three new species have arrived, but we have not been able to identify them as we lack the required scientific knowledge,” he said.
The people of Pahumora, Ujani Mirigaon, Bamundoloni, Khonajan-Ahomgaon, Ujani Khamti, Khagorigaon, Deobeel, Potabeel, Na-bamunia, Dikhowmukhia, Madhabpur and few more villages around Satajan wetland formed the Ranganadi Prakriti Suraksha Samiti a few years ago. And Baliram is the all-important secretary of the Samiti. “He is our moving force. Suppose you hear a bird calling out loudly even at the dead of night, Baliram will take only a few seconds to rush out and find out if there was an intruder. It is because of him that our boys have taken to a night-vigil of the wetland in order to protect the birds,” said Debaranjan Morang, who was recently elected chairman of the Ranganadi Panchayat. 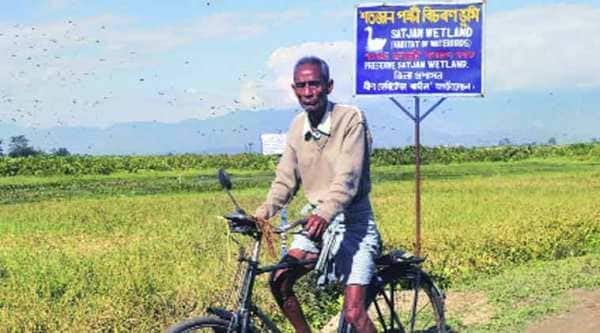 Baliram knows most of the species by their local and English names. “It is difficult to remember the scientific names, so I have bought several books to refer to whenever I need to find out or tell visitors about the different birds,” he said. Bird species that have been listed here include common teal, purple moorhen, lesser adjutant stork, gadwall, lesser whistling teal, night heron, ferruginous duck, darter or snake-bird, and spotted bill among others.

With Satajan slowly becoming known, the wetland is beginning to get a number of visitors every winter. “College and school students come here for educational purpose. We also get visitors from outside, especially professors and bird-watchers. Since the road to the Apatani Plateau in Arunachal Pradesh passes through our village, we occasionally get foreign tourists too,” said Lakhidhar Gogoi, another villager.

The area has got the attention of poachers too. “Last year, we caught a person with one of the two bar-headed geese that came here for the first time. The man is still in jail. The credit goes to Baliram for catching him,” said Kandarpa Bori, a local schoolteacher.
“Satajan needs to be declared a bird sanctuary. Some birds that come here are listed as near-threatened by IUCN,” said Anwaruddin Choudhury, an IAS officer  and ornithologist who has documented birds across the Northeast.

Uber pulls out case against ban