The ‘ape’ and the monkeys 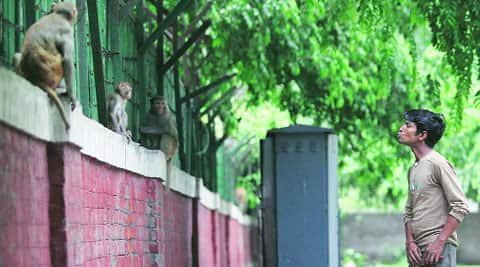 Away from the sober confines of government offices and the bustling traffic of Lutyen’s Delhi, Mahinder Nag wages a seemingly one-sided battle. The troop of monkeys that has colonised Sunehri Bagh eyes him warily. But in this daily battle, there are no winners. For Mahinder, it’s just a job — one that he’s good at.

Mahinder is one of the 40 people employed by the New Delhi Municipal Corporation (NDMC) to scare away monkeys. Union Urban Development minister M Venkaiah Naidu was referring to them when he talked about men disguising “themselves as langurs” to tackle Delhi’s monkey menace.

There is no disguise, at least not yet. Mahinder has not painted his face black or put on a furry garment or worn a tail. Dressed in a T-shirt and trousers, Mahinder, however, knows how to ape a langur and chase the monkeys away. As he walks through the area assigned to him — housing five heritage bungalows — he emits high-pitched cries scarily reminiscent of  the langur, the monkey’s natural foe. The monkeys recognise Mahinder, and keep a close watch on him. As he comes closer, they beat a hasty retreat into the relative safety of trees. The few stubborn young monkeys who attempt to challenge the 26-year-old’s authority give up once Mahinder takes out his gulail (slingshot).

Mahinder often speaks of Chamru — the langur that accompanied him on these patrols until February 2013, when the Supreme Court banned the use of captive langurs. “We are from the Madaari caste, we have traditionally worked with monkeys and langurs for hundreds of years. I learnt a lot about monkeys from Chamru and her behaviour,” he says. He speaks fondly of the time madaaris would be welcome in  small towns and villages, and of children queueing up to watch “bandar aur madaari ke kartab”. “But in Delhi, they think we’re being cruel to our animals. The time of the madaari is gone and, after I released my langur into the forest, for some time I didn’t think I would be able to stay on in Delhi. But within a few days, NDMC asked me if I could be the langur,” he says, breaking into a grin.

Mahinder came to Delhi four years ago from Agra, where he worked at a jewellery shop. He brought his langur along and would perform tricks near India Gate. Then, an acquaintance told him about NDMC’s plight with monkeys and helped him get in touch with the corporation.

He earns Rs 6,000 every month, with which he supports his wife and two children. “For the time being, it’s a good job. But I hope they don’t introduce the langur costume. I will have to colour my face black and wear a tail. The monkeys will think I have gone mad and so will the people outside,” he says.

Previously, a troop of almost a hundred monkeys ruled unchallenged in the area of Sunehri Bagh, Nirman Bhawan and Udyog Bhawan. But since Mahinder and others like him were introduced, they were forced to splinter into smaller groups.
Mahinder is at work at 9.30 am and is there till 6 pm.

Over the past few years, he has learned a lot about the monkeys he is “in charge” of, he says. They like gathering in the afternoon, at around 2 pm, behind the heritage buildings at Sunehri Bagh, playing in the tangled vegetation, their raucous shrieks filling the air. As he comes closer, they leap through the trees, rocketing away from him. A juvenile monkey, confused by the sudden commotion, stays behind. As Mahinder approaches, he sees the juvenile monkey chewing on a packet of tobacco. He frowns disapprovingly before he lets out a hostile screech. The juvenile monkey drops the packet and rockets upwards into the tree.

“Mostly I leave them alone in the afternoon, because that’s when they stay away from the bungalows,” he says. While the monkeys relax and play, Mahinder has a hurried lunch — which is usually roti, that he brings from home, and whatever sabzi the vendors outside Nirman Bhawan have to offer. After a quick beedi, he goes back to Sunehri Bagh for his post-afternoon patrol of the area. “Monkeys are most active during the morning and evening. That’s when they do the most damage. They break pots, tear clothes that have been kept out to dry. At times, we get specific complaints from residents,” he says.

Around 4 pm, as government offices start emptying, Mahinder’s work becomes hectic again. With a number of people feeding the monkeys, the animals begin getting excited and move towards the bungalows. But Mahinder is ready, and he screeches and snarls at the monkeys, who promptly change their route to avoid him.

Over the years, according to him, he has seen monkeys in central Delhi “picking up bad habits of people around them”. Some scourge the junkyard for dregs of booze left behind in discarded bottles, others chew on tobacco, some try to light matches while others prefer eating samosas over bananas. Mahinder, too, has had to adapt with the changing times, and the new behaviour patterns of the monkeys.

At 6 pm, his shift ends and he begins the long trek back home. He cycles to Tilak Bridge and then takes the train back to his home on the outskirts of Faridabad. “When I reach home, I eat and shower. I play with the children. Though they often ask me about the monkeys, I don’t tell them much. Pretending to be a langur is fine for me, but I want them to have proper jobs,” he admits.