Reports said that members of SGPC and a Sikh radical group clashes inside the temple premises. 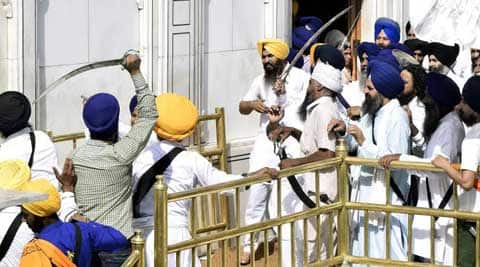 Clashes broke out between Sikh groups at the highest temporal seat of the community inside the Golden Temple complex on Friday, even as Amritsar observed a bandh to mark the 30th anniversary of Operation Bluestar. Video footage showed people brandishing swords, spears and sticks and clashing and chasing each other outside the Akal Takht building. At least six people, including a police head constable, were injured, Additional Deputy Commissioner of Police (Special) Harjit Singh Brar said.

The violence broke out after a function organised by Shiromani Gurdwara Parbandhak Committee (SGPC) to honour families of those killed in Operation Bluestar had ended, and Akal Takht chief Giani Gurbachan Singh had delivered his address.

Trouble began when Shiromani Akali Dal (Amritsar) chief Simranjit Singh Mann sought to address the gathering from the rostrum of Akal Takht, but was denied by SGPC officials. However, Mann managed to deliver his speech near the Akal Takht before leaving.

After this, a group of radicals was seen brandishing swords and shouting pro-Khalistani slogans. They also raised anti-SGPC slogans and demanded that the Akal Takht Jathedar step down.

An argument followed, and the radicals caught hold of an SGPC man and thrashed him.  The radicals then barged into the Akal Takht building. A violent clash between them and the SGPC task force ensued, with both groups attacking each other with swords and sticks. The radicals were chased out of the building, but members of both groups continued chasing and attacking each other outside the Akal Takht, spreading panic in the Golden Temple complex.

The Akal Takht chief later called the violence a handiwork of “agencies”.