Shimla’s HPCA academy to be demolished

No necessary approvals of the corporation were taken under building regulations rules. 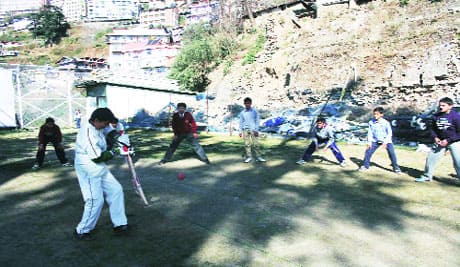 A training session at HPCA cricket academy at Lalpani, Shimla.

The Shimla Municipal Corporation Wednesday ordered demolition of the Himachal Pradesh Cricket Association’s (HPCA) cricket academy at Lalpani, holding that it was an “unauthorised structure” built without obtaining mandatory approvals in the town’s green belt where new constructions are banned.
The HPCA, led by BJP MP Anurag Thakur, already faces three FIRs registered by the state Vigilance and Anti-Corruption Bureau relating to its Dharamshala cricket stadium and a luxury hotel, The Pavilion.
The Rs 1.6 crore cricket academy, built under Anurag’s supervision to train budding cricketers, is located at Lalpani, a downhill locality. It was built on an old playground of a government senior secondary school and some forest land as a training facility for youths in 2011-12.
Passing orders for its demolition, Shimla Municipal Corporation (SMC) Commissioner Amarjit Singh, who had earlier sent a showcause notice to the HPCA on October 8, 2013, said he was fully convinced that the building was an unauthorised structure. No necessary approvals of the corporation were taken under building regulations rules. Maps submitted by the HPCA were also rejected on August 11, 2011, and a notice sent to stop the work was never complied with, he said.
Joginder Chauhan, SMC’s Joint Commissioner (Legal), said, “The HPCA has been given seven days time by the commissioner to demolish the unauthorised building, failing which the municipal corporation will act and the cost will be recoverable from the HPCA .The defence taken by the HPCA was weak and I could prove that evidence, based on documents, was strong enough to prove that the building was constructed in violation of building norms in the green belt.”
HPCA vice-president Surinder Thakur, when contacted, said he was awaiting the order and the next course of action will be decided in one or two days after consulting legal experts. “Cricket training activities will not be allowed to be affected by the order as there are 40 students getting coaching at the academy,” he said.