A Mumbai court on Monday remanded Indrani Mukerjea and her driver Shyamvar Rai to judicial custody till September 21. Sheena was allegedly strangled in a car, then her body was burnt and dumped at a forest in Raigad, about 84 kms from Mumbai.

DNA tests conducted by the Forensic Science Laboratory here have established that the skeletal remains found at Pen in 2012 were of Sheena Bora, as the police suspected. Moreover, the police claimed that they have recovered the shoes from Kolkata that were used by the accused when they went to dump the body in Pen, near Raigad.

FSL officials said that the DNA extracted from the skeletal remains matched that of Indrani Mukerjea, prime accused in the Sheena Bora murder case.

Shyamvar Rai, who worked for Indrani as a driver in 2012, had earlier told the police during interrogation that he, along with Indrani and her former husband Sanjeev Khanna, had killed Sheena, burnt her body and dumped the remains in a forest off the Pen-Khopoli highway from where the police retrieved the samples. According to the police, Sheena was murdered on April 24, 2012.

The DNA extracted from Sheena’s brother Mekhail’s blood samples also matched Indrani’s. “The 15 markers from Indrani’s DNA matched with corresponding markers from DNA extracted from the skeletal remains found at Pen, thereby giving a 100 per cent match. It can be concluded that Indrani is the mother of the woman whose skeletal remains had been found,” said an FSL official. The official said the report was sent to the police Monday. 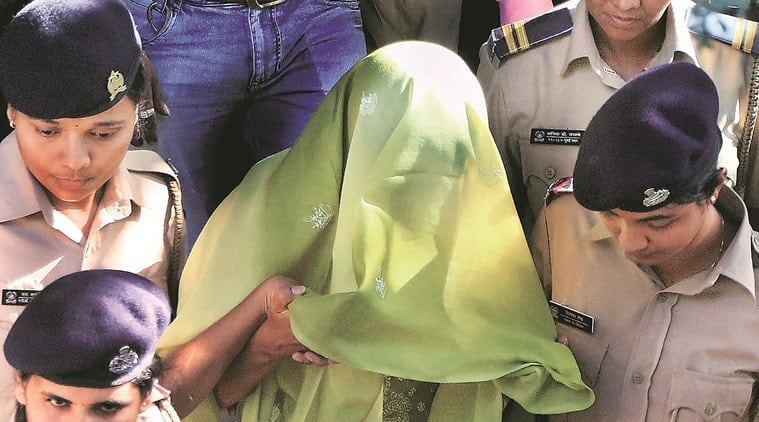 One of the prime accused in Sheena Bora Murder case Indrani Mukherjee coming out of Bandra Court. (Source: Express photo by Amit Chakravarty)

The police had also sent DNA samples of Rai to the FSL, requesting it to keep a profile of his DNA in case the police needed it in future.

A paternity test, however, is yet to be conducted as the FSL said it has not yet received the blood samples of Siddartha Das, who is said to be Sheena’s father.

Later in the day, Mumbai Police Commissioner Rakesh Maria said: “Our team had taken Khanna to Kolkata where he led us to a spot where we have recovered shoes used by the accused when they went to dump the body in Pen.” He said the police have also recovered part of Sheena’s jewellery from Kolkata.

Maria said a team has been specifically probing the financial dealings by the Mukerjeas.

Earlier in the day, a fortnight after their arrest and custodial interrogation in the sensational Sheena Border murder case, a local court today remanded Indrani and her driver Shyam Rai to judicial custody till September 21 while another accused Sanjeev Khanna was taken to Kolkata for producing him in a court there.

Special Public Prosecutor Vaibhav Bhagade sought judicial custody for Indrani and Rai and told the court that Khanna could not be produced as he was taken to Kolkata this morning as part of investigations.

The Magistrate asked the police to produce Khanna in the court here tomorrow.

The mandatory period for police custody of all the three ended today.

On Saturday, the Bandra Metropolitan Magistrate court had extended their custody till today with the prosecution stating that the ongoing probe is yet to cover a large area and that Indrani remains “uncooperative and a hard nut to crack.”

Bagade had then said the “Accused (Indrani) has remained uncooperative.

Indrani, mother of Sheena, was taken to her residence in Worli here yesterday, apparently to connect a few “remaining dots” in the murder mystery while Khanna,Indrani’s former husband, and Rai (former driver of Indrani) — were grilled at Khar police station.

Indrani was later brought back to Khar police station. Indrani, Khanna and Rai have been arrested on the charge of murdering Sheena and disposing of her body in a Raigad forest in April 2012.

The police has also extensively grilled Indrani’s husband Peter Mukerjea,though he is not an accused in the case. Others questioned in connection with the case included Peter’s son Rahul Mukerjea and Vidhie, daughter of Indrani and Sanjeev Khanna.

The police have also questioned Siddharth Das, biological father of Sheena and Mikhail.

Sheena was allegedly strangled in a car, then her body was burnt and dumped at a forest in Raigad, about 84 kms from Mumbai.

The police had on Thursday claimed that Indrani had confessed to murdering Sheena and were now also investigating if someone else could have been involved in the murder case.

Yuvraj Singh sweats it out in the gym