This book is a defence of his prime ministership. Somebody had to stand up and defend this old man, said Sanjaya Baru. 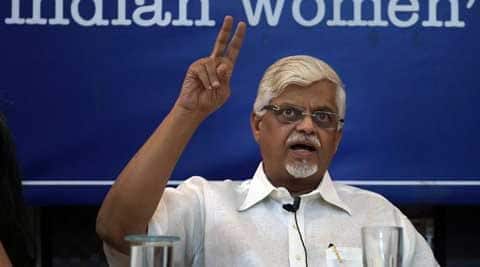 Baru said he has offered the strongest defence of the Prime Minister, but it created controversy due to ill-informed initial feedback. (PTI)

Former media advisor to the Prime Minister Sanjaya Baru on Friday rejected criticism that his book on his days in the PMO was a manifestation of his disappointment over not getting a second term.

“This is nonsense. I have never been in a job for more than five years. In fact, I recommended the name of Deepak Sandhu as my successor,” he said at an interaction here when asked about suggestions that he was dejected over denial of a second stint in the PMO and that was the reason for writing the book ‘Accidental Prime Minister: The Making and Unmaking of Manmohan Singh’.

Asked about the timing of the release of his book in the midst of the elections, which has been used by Congress’ rivals, he stated that his critics would have also slammed him for not having the guts to release the book when Manmohan Singh was in power.

Baru, who is under attack ever since the release of the book, said he has offered the strongest defence of the Prime Minister, but it created controversy due to “ill-informed” initial feedback.

“The chapters 1 to 13 are the strongest defence of the Prime Minister. I challenge a book which seeks to offer a stronger defence. This book is a defence of his prime ministership…. Somebody had to stand up and defend this old man,” he said.

To a question, he said that he did not speak to the Prime Minister after the book was released. Baru said that much of the controversy surrounding the book was because of the intial response, which was misplaced and media picked up what they got in their hands.

“However, after reading the book several people including from Congress called me and said that the book was different from what we have heard,” he added.

Baru reiterated that the Prime Minister would brief Congress President Sonia Gandhi, but not share files with her as has been played out in the media.

“The Prime Minister would brief her, which means only conversation. I have never stated that files were taken to her,” he said, while asking people to read his book before coming to any conclusion.

Noting that Singh was a collective choice of UPA alliance partners, Baru said he was fully qualified for the top job. “It is the combination of circumstances that defined Manmohan Singh as a Prime Minister…. He himself has several times said that he was an accidental Prime Minister.”

Baru credited the Prime Minister for his administrative skills, economic expertise and successfully executing the civil nuclear programme with the US and also defended Singh for having described the US President as the most loved leader in India.

He patted Bush for walking extra mile and getting the Chinese onboard for passage of civil nuclear programme. However, he refused to answer any other query expect on his book.

“My real fear was that this book would have been seen as a last minute PR for Manmohan Singh. I never thought this book would draw criticism,” he claimed, while adding that he never imagined that the book would emerge as a best seller in its category.