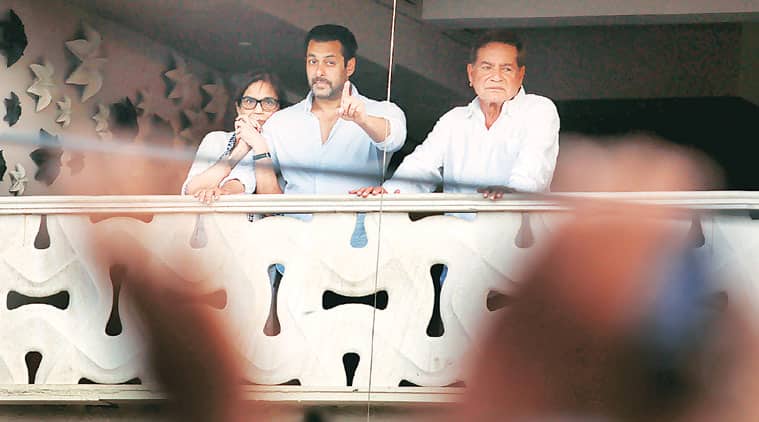 Actor Salman Khan with his parents at his residence, in Mumbai on Friday. (Source: Express Photo by Vasant Prabhu)

In a major relief to Bollywood actor Salman Khan, the Bombay High Court on Friday suspended the five-year rigorous jail term handed to him by a sessions court earlier this week. Admitting Khan’s appeal against the conviction, the High Court also expedited the hearing of the case.

The court issued the order a day before it goes on vacation. Khan was convicted on Wednesday on charges of culpable homicide not amounting to murder in the 2002 hit-and-run case in which one man died and four were injured. The men were sleeping on a pavement in suburban Bandra when Khan’s Toyota Land Cruiser ran over them.

The High Court also directed Khan, who did not appear in person, to surrender before the trial court forthwith and execute a bail bond of Rs 30,000 with one or two sureties of a like amount.

At 5:35 pm Friday, Khan appeared before the sessions court to furnish the fresh bond, following which the trial court accepted the extension of bail granted by the High Court and ordered him to produce a personal surety within two weeks.

The court will now hear the matter on June 15, when it will give directions regarding the hearing of the appeal in July. For now, Salman will remain out of jail, but will have to seek the court’s permission whenever he needs to travel abroad — his passport is with Mumbai Police.

“The applicant was on bail throughout the trial… Even on the basis that there is sufficient evidence to indicate that the applicant was driving the vehicle, certainly a number of arguable

During the hearing, Thipsay sought the evidence given by Ravindra Patil, Khan’s police bodyguard who later died of tuberculosis. Patil was the first to inform police about the accident, and it was based on his statement that an FIR was registered at Bandra police station.

Appearing for Khan, senior criminal lawyer Amit Desai argued that the statement of the actor’s driver Ashok Singh was not recorded even though he was interrogated by the investigating officer. Desai also raised questions about the trial judge disregarding Singh’s testimony. “Singh was not taken in as a defence witness as an afterthought,” he added.

In addition, the defence also argued that the magistrate’s court had accepted the statement of key witness Patil, who was with Khan in the car during the incident, despite the bodyguard saying in an interview that there were four people inside the car at the time of the accident.

He also pointed to depositions of other witnesses, including one present at the spot who said that “besides Khan and the constable, there were two other people in the car”.

Public prosecutor Sandeep Shinde opposed the suspension of the sentence, arguing that evidence showed it was Khan who was driving the car. He argued that there were three people in the car, with the actor at the wheel, as stated in the FIR. He further argued that the actor’s blood samples had more than the permissible level of alcohol even 48 hours after the incident.

The High Court, after hearing the arguments for over a couple of hours, observed that the actor was out on bail throughout the trial and the “status quo” needed to be maintained.

Soldier’s widow to get 1946 George Cross back