Contending that terror is a global menace, Israeli Prime Minister Benjamin Netanyahu and Home Minister Rajnath Singh here have reviewed existing cooperation and future possibilities of enhancing engagement in dealing with the threat.

Both the leaders also expressed their countries’ keenness to strengthen ties, with Netanyahu emphasising that he “believes that relations between the two countries were poised for rapid development” following his meeting with Indian Prime Minister Narendra Modi in September in New York.

During that meeting, the Israeli Premier had said that “sky is the limit” in terms of prospects of cooperation between the two countries.

Singh and Netanyahu discussed the regional situation and the evolving threats to the global communities from terror.

Singh said terror was a threat not only to countries like India and Israel but to the whole world.

Fresh from his participation at Interpol General Assembly in Monaco, Singh said that he also made a strong pitch for cooperation in the field of cyber security during his one hour conversation with the Israeli Premier.

Singh was earlier widely quoted in the press for highlighting the use of social media for indoctrination by Jihadi elements and the urgent need to device ways to curb this practice through the use of internet.

He also made a special reference to Modi’s “Make in India” initiative and invited Israeli industries, including the defence sector, to take advantage of the investment friendly policies adopted by the new government.

Expressing satisfaction at the growth in bilateral ties in a range of areas, including defence and agriculture, Singh noted that signing of agreements recently in the area of Homeland security had opened another sector for mutually beneficial cooperation.

Singh particularly emphasised on the importance of capacity building and training in this context. 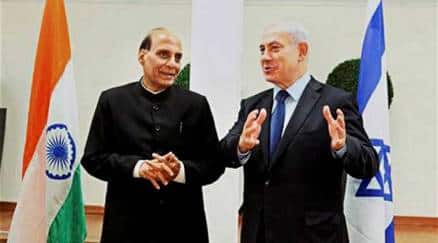