Rahul Gandhi said he was against privatisation of the institute and that he would back the demands of the students. Congress Vice President Rahul Gandhi on Friday visited the Film and Television Institute of India (FTII) in Pune and promised the students who have been on strike for the past 50 days that he would take up the issues raised by them in Parliament.

He attacked the BJP government and the RSS by saying they were “promoting mediocrity” by appointing people with mediocre reputations on institutions of national repute and also in key bureaucratic and judicial positions. He said the government was acting like a ‘bully’, forcing its own choices on the people.

Gandhi was among a dozen leaders of various political parties — including the BJP — who the students had written to asking them to support their cause to stop the government from ‘degrading various important institutions’ including the FTII. The students have abandoned all academic activities for the past 50 days demanding that the appointment of actor Gajendra Chauhan and four others be revoked. The students argue that these appointees lack the ‘cinematic vision’ and ‘excellence’ to run the premier film institute in the country that was headed in the past by veterans such as Shyam Benegal, Adoor Gopalakrishnan, U R Ananthamurthy and Saeed Mirza.

Clad in casuals, Rahul reached the FTII campus at noon along with actors and Congress members Chiranjeevi, Raj Babbar, Khushboo and Ramya Krishnan and spent nearly two-and -a-half hours with the students. He participated in a question and answer session with the students and attended a screening of two diploma films produced by FTII students. 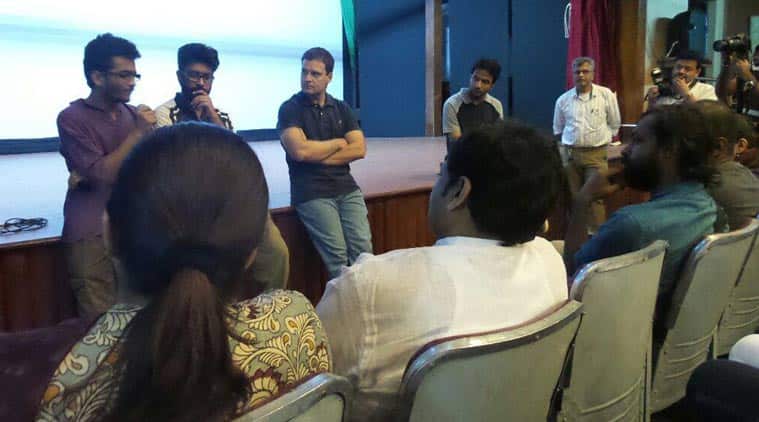 Gandhi said that he has promised the students that he was ready to stand with them whenever they needed the party’s support.

“When I was interacting with students, a female student told me that the environment has become such that she feels threatened to go out. That the government is putting pressure on them using different tactics. This is not an India we want to build. We want an India which practices brotherhood and believes in dialogue,” said Gandhi.

Shout fest among Congress and BJP workers in front of FTII main gate. Each group trying to out shout other. @IndianExpress

While answering questions raised by students, Gandhi attacked BJP and the RSS for ‘promoting mediocrity’ in institutions of national importance.

“Our forefathers established institutions like IITs, FTII, JNU and Indian Council of Historical Research and Indian Council of Cultural Relations with a certain vision in mind to create a force of world-class academicians, artists, scientists and engineers in the country. This government, along with the RSS, is systematically trying to ruin this tradition by appointing mediocre people in important posts. Why is someone (Gajendra Chauhan) who is considered to be mediocre being put in charge of students who want to grow?” said Gandhi.

Why are men, in their early 30s, losing hair?