We cannot accept violence against any religion on any pretext, Modi added. 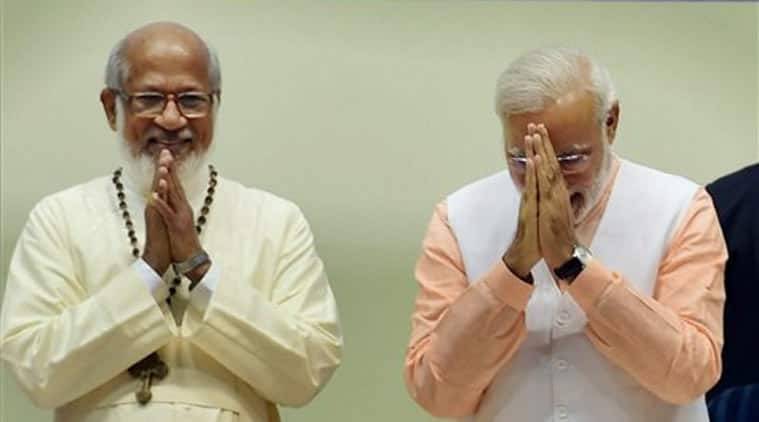 Prime Minister Narendra Modi and Cardinal George Alencherry during a function to celebrate the elevation to sainthood of Kuriakose Elias Chavara and Mother Euphrasia in New Delhi on Tuesday. (PTI Photo)

After remaining silent for weeks at the Sangh Parivar’s aggressive ghar wapsi campaign and the string of attacks on churches in the capital, Prime Minister Narendra Modi made a powerful intervention on the side of freedom and tolerance on Tuesday, underscoring his government’s commitment to protect the right of every individual to adopt and retain the religion of his choice.

With leaders of the Christian community, priests and nuns on stage and in the audience, the PM announced at a function to celebrate the sainthood of Kuriakose Elias Chavara and Mother Euphrasia, “My government will ensure that there is complete freedom of faith and that everyone has the undeniable right to retain or adopt the religion of his or her choice without coercion or undue influence.

“My government will not allow any religious group, belonging to the majority or the minority, to incite hatred against others, overtly or covertly. Mine will be a government that gives equal respect to all religions,” he told the gathering at Delhi’s Vigyan Bhawan.

Modi quoted from the Declaration of the Interfaith Conference of 2008 in The Hague: “We consider the freedom to have, to retain, and to adopt, a religion or belief, is a personal choice of a citizen.” India, he added, is the land of the Buddha and Mahatma Gandhi, and “equal respect for all religions must be in the DNA of every Indian”.

“We cannot accept violence against any religion on any pretext, and I strongly condemn such violence,” the PM said. “My government will strongly act in this regard.”

Modi appealed to all religious groups to act with restraint, mutual respect and tolerance in the “true spirit of this ancient nation which is manifest in our Constitution”.

Since the beginning of December 2014, five churches have been attacked in Delhi and two convents have been broken into. A large part of one of the churches has been gutted entirely. The Christian community has repeatedly expressed its insecurity and apprehension and, after the break-in and theft at the Holy Child Auxilium last week, the PM had summoned Police Commissioner B S Bassi for an explanation. Modi’s reiteration of the constitutional freedom of religion and his government’s resolve to defend it comes after a series of statements over the last nine months from members of the BJP and larger Sangh Parivar, stressing India’s alleged “Hindu” identity.

Tuesday’s speech by the Prime Minister came exactly a week after Arvind Kejriwal’s Aam Aadmi Party inflicted a crushing defeat on the BJP in the Delhi elections — a result seen to reflect, to some extent, anger and annoyance with the shrill Hindu rhetoric employed by some campaigners.

The world, the PM said, was at a crossroads, and if the transition was not negotiated with care, it could be thrown back to the dark days of bigotry, fanaticism and bloodshed. He referred to the Rig Veda, Swami Vivekananda and Rabindranath Tagore to highlight India’s tradition of tolerance, spiritualism and respect for all faiths.

Quoting from the Rig Veda, the PM said that India has always been open to new thoughts. “This philosophy has guided our intellectual discourse since time immemorial. Mother India gave birth to many religious and spiritual streams. Some of them have even travelled beyond Indian borders,” he said.

“The tradition of welcoming, respecting and honouring all faiths is as old as India itself. As Swami Vivekananda said: ‘We believe not only in universal toleration, but we accept all religions as true. What Swami Vivekananda had said a century ago holds good, and will forever, not only for this nation but also for this government or, for that matter, any government in India, run by any political party.”

It is this ethos and culture of India that gave rise to the Constitution’s principle of equal respect and treatment for all faiths, he said. He mentioned Saint Chavara as a great social reformer, and said that very few outside Kerala knew, however, that he had also started a Sanskrit school. In a world wracked by increasing divisions and hostility along religious lines, the PM said, the ancient Indian tradition of mutual respect for all faiths was beginning to shine through.
Modi also reiterated his vision of “sabka saath, sabka vikas”, and said it meant food on every table, every child in school, a job for everyone, and a home with a toilet and electricity for every family — a dream that could be realised only through unity among all Indians.