Overnight: Travelling through Delhi to capture signs of a regime change

Congress union ministers have lost their police escorts, and barricades that blocked access to the Congress office on Akbar Road have been moved to Ashoka Road. 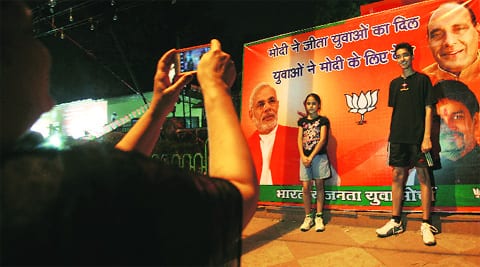 It takes but a few hours for the balance to tilt from the Congress to the BJP. Congress union ministers have lost their police escorts, and barricades that blocked access to the Congress office on Akbar Road have been moved to Ashoka Road

The party at the BJP office after counting day is long past. The last BJP worker, with voice hoarse and delirious with pride, has left for home and the clean-up crew has arrived. Trucks line the roads outside to pack away dismantled furniture, microphones and tents. Electricians cautiously disentangle a row of lights hastily strung over trees that flank the premises.

Night has fallen, a sweeping victory has sunk in and Delhi seems to await a new dawn. It takes but a few hours for the balance to tilt from the Congress to the BJP. Congress union ministers have lost their police escorts, and barricades that blocked access to the Congress office on Akbar Road have been moved to Ashoka Road. 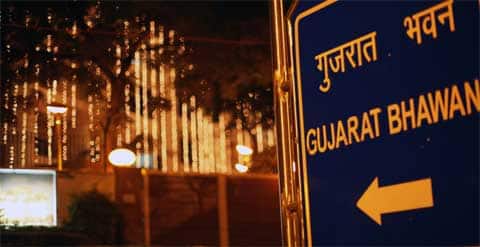 It’s past 11 pm and as police take away the last few barricades, 11 Ashoka Road has new visitors. Voters. Voters who have driven to the BJP office to witness ‘history’. And the BJP has seemingly prepared for it. A giant poster of the party symbol on a saffron background stands outside the main gate with a dais below.

A father lifts his six-year-old daughter on the dais and asks her to pose. One hand on her hip and head tilted to one side, the daughter smiles and holds up two fingers as her parents furiously capture ‘history’ on their mobile phones. A petulant son waits by the side, he is not interested in getting his picture taken. “What are you waiting for? Get up there. We have waited 10 long years for this moment and you are standing around,” the father chides him. “I don’t want to go,” the son protests but he is bodily put on the stage.

Metres away, five young adults indulge in their favourite pastime — selfies. At least three dozen photographs are snapped in a few seconds and a critical analysis of each follows. “I think you should tag this one on Facebook, the light from the street lamp is perfect and the angle is awesome,” says one. Another chimes in, “Yes and don’t forget to put it on Twitter. I think we will be the first to upload these pics.” 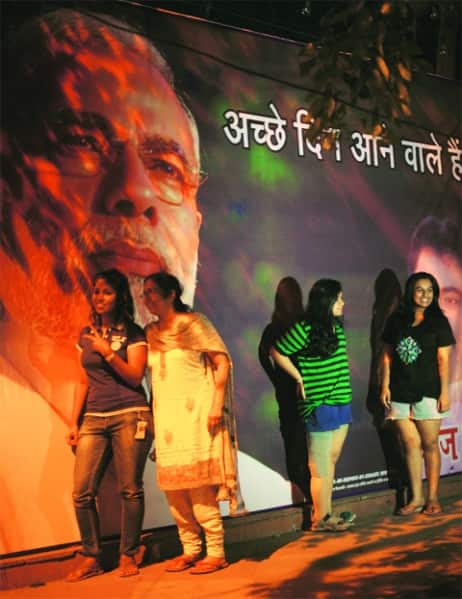 Quarter to midnight now and the AICC office on Akbar Road is packed up. Where once a visitor without influence would have been shunned at the gates, we walk in unchallenged. A guard protests, but relents on seeing the cameras.

Back on Ashoka Road, parking outside the BJP office wanes. More BJP, correction, Modi enthusiasts arrive but are forced to settle for posters 100 feet away from the symbol. What began as a quick photo shoot metamorphoses into a minor carnival.

Between scrunching his family and a giant Narendra Modi head into a frame, a retired Air Force office converses with a businessman next to him doing the same thing. They congratulate each other. “It has finally happened. A new government, a new leader and new purpose. For once, I feel like my vote has counted,” says the Air Force officer.

“The next challenge is the bureaucracy. The Congress have planted their people in it. Modi will have to take care of them first,” the businessman counters.

“It may take a few months, but within the year, we will see change.”

“Yes, yes. I brought my children and grandchildren here. Why should they read about it in their textbooks, when history is happening in front of them?”

A granddaughter strays in front of a congratulatory poster from a maulana, Sajid Ahmed. The businessman quickly asks her to move back under a Modi poster. “Why are you standing there? We have come here only for Modi. Not them,” the businessman says.

A few kilometres away from 11, Ashoka Road, is BJP president Rajnath Singh’s house. He has new neighbours in the form of a police van. As we approach his house to take photographs, a policeman stops us. “The press conference is over. Come back tomorrow,” he says.

Asked when he was posted here, he replies, “Obviously, this evening. The BJP has won and now this road and house is access-controlled.”

In Chanakyapuri, police have even bolstered the approach road to Gujarat Bhawan, where Modi’s core political team hunkered down for a few hours. The premises is lit up with fairy lights, the wrought iron gates are tightly shut, but at least four police vehicles patrol the perimeter.

Back in Lutyen’s Delhi, its two minutes to midnight and AICC President Sonia Gandhi’s house looks strangely deserted. Once among the nation’s power centres, constantly thronged by supporters, detractors and police personnel, a few CRPF men now man a barricade. We take photographs for more than 15 minutes, before a guard steps up.

“Where are you from? The press?”

“If you had come here on May 15, we would not have even let you stop outside this area, let alone take photographs. But I guess it is OK now. Their time is over. Just take it from a distance or at an angle.”