‘One day, I’ll tell my girl her father was a rapist’ 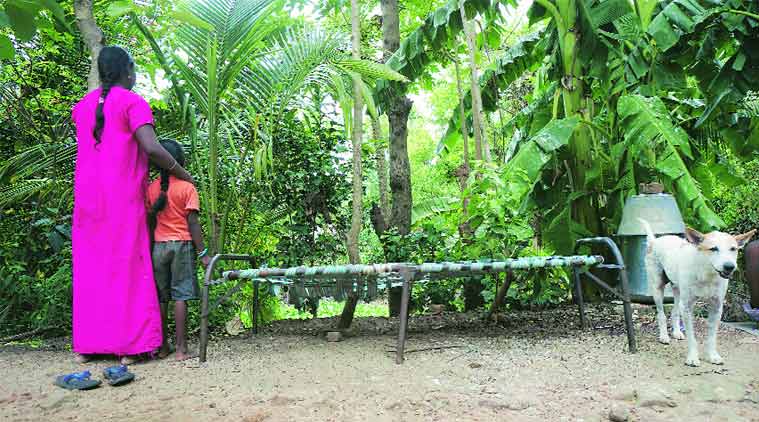 The 21-year-old rape victim with her daughter at her village near Virudhachalam in Cuddalore, Tamil Nadu. (Source: Express Photo)

For four days, the 21-year-old woman, an unwed mother of a six-year-old girl, has known no peace. Anger and despair have been her only companions in the single-room tenement she calls home, in a village some 80 km from Cuddalore.

“Did the judge ever think how I suffered all these years? He knew I had a baby from that rape. And now this single order of his wants me to go through that suffering again.”

The judge she refers to is Justice D Devadass of Madras High Court who, citing religion and its capacity for reconciliation, last Tuesday referred the case of a minor’s rape for mediation between the victim and accused.

The victim, who was 14 when she was raped in 2008, has since lost her parents and is the mother of a child born after the rape.

Justice Devadass’s order came on an appeal and a bail plea filed by the accused, V Mohan, who was convicted and sentenced to seven years and was slapped a fine of Rs 2 lakh by a Mahila Court in Cuddalore in 2014. He has not served his term. Two of his associates were charged with lesser offences.

Claiming that a similar case which he had referred for mediation was near a “happy conclusion,” (the accused had agreed to marry the victim), Justice Devadass, in his order, said: “In the facts and circumstances, the case before us is a fit case for attempting compromise between the parties. ‘Mediation’ mode is best suited to them.”

But the victim says she will never agree to a settlement. “I will fight it out. My entire life. I will show my daughter the way I struggled and fought to survive.”

“If I go for a settlement, one day my child will question me for taking up his offer of money. If I agree to his offer, may be we will get something. But what will be her future… being brought up as the daughter of a rapist. Even if her father is a rapist, she will realise one day that her mother struggled for her. She will learn it the hard way. That will make her a good woman,” she said.

She can never forget that summer afternoon of 2008. Two days before her Class X examinations, an undergraduate student assaulted her.

“He added drugs to a cold drink and raped me. We knew each other and had common friends. After I narrated this to my parents, he threatened them. My father was attacked. He (the rapist) pressured me to go for an abortion. He kept denying his role until the DNA report came in. That led to his conviction,” she said.

“The entire village boycotted us when they learnt of the rape. Many of my relatives and friends stopped speaking to us. My parents questioned Mohan and were attacked. After that, I delivered a baby. She is now six years old. I was all alone these years. I go out to work as a porter when I have no other option. I worked with a textile firm in Tirupur for six months. Now my brother, who is a B.Com graduate, works as a porter to bring some money.”

“It was unfair on the part of the judge to give such a judgment without seeking my opinion. He forgot that I was the victim… After putting me into this ordeal for seven years, all of a sudden he (the rapist) agrees to marry me. All he wants is to step out of prison by agreeing to mediation,” she said.

“Only those who live here and see my plight understand the kind of problems I have undergone… There are several ways to make money. But you can’t buy dignity. Isn’t this order, without seeking my opinion, now asking me to place my self-respect at the mercy of the man who raped me? How can I have a life with him? I can only request the top judge (Chief Justice) to cancel this order.”