Now, Saffron leaders ask Hindus to have 10 kids to ensure survival of religion 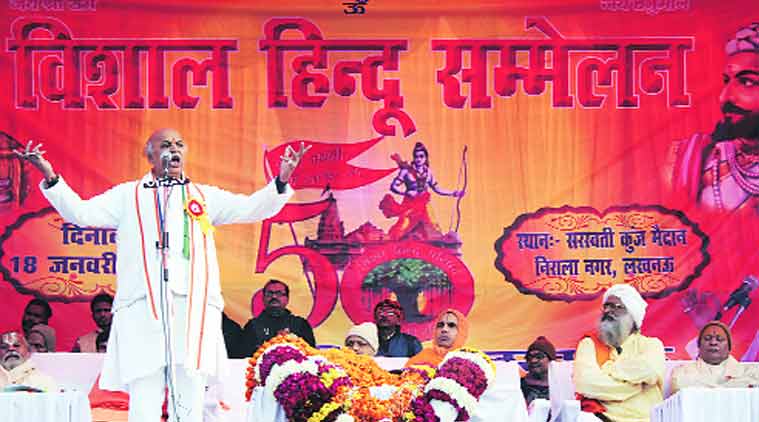 VHP working president Pravin Togadia on Sunday exhorted Hindu families to have “several children” to ensure survival and growth of the religion – a remark which was echoed by a few seers who were attending an event organised by the saffron outfit here.

Togadia and other speakers maintained that “ghar wapsi” and “anti-love jihad” campaign would continue, and also dubbed Aamir Khan-starrer PK as a “conspiracy” against Hindus.

Addressing VHP’s Hindu Sammelan, Togadia said there was a competition going on among politicians to give reservations to Muslims and they do not care about Hindu youths. “Now, we will not let population of Hindus decrease to 42 per cent from 82 per cent. Hindus need to increase their population to ensure their safety because system of the country is not able to protect Hindus,” he said and asked the gathering to take pledge to have “several children” in Hindu families for increasing the population of the community and ensure its safety for 1,000 years.

Echoing Togadia’s views, seer Ramanandacharya Raghvachrya said Hindus were facing threat across the world. “Lord Krishna had 16,108 wives and he had 10 children from each of them. The world will be ruled by those who have maximum population. Lord Ram too had asked his brother Bharat to have more sons for protection of the religion,” he said.

“Slogan of ‘hum do, hamare do’ will not work. Each Hindu family should have at least eight children,” said Kanhaiyya Das, a top priest from Ayodhya.

Das also said: “Any Hindu who has faith in lord Ram is a Ramzada and and those who do not have faith in Ram are Haramzadas.” Niranjan Jyoti had earned wrath from several quarters for a similar statement at a public meeting in Delhi a few months ago. “When a Sadhvi made that remark, Opposition parties disrupted business in Parliament,” he said.

The saffron speakers also slammed the makers of PK, saying it showed that “Hindus offer prayers in temples twice a day because of they fear god.” “As per that criteria, Muslims fear god more because they offer namaz five times a day. Yeh naachne-gaane wale dharm ki vykhya nahi kar sakte,” Raghvachrya said. He added that Hindus were ready to take up arms too to protect their religion.

Defending “ghar wapsi” events, they said it was an age-old campaign, launched when Muslims used to rule India. “Conversion will be stopped, but ghar wapsi will continue,” Togadia said, adding, “ghar wapsi” was started in the country around 700 years ago when Jagatguru Ramanandcharya had welcomed around 25,000 Muslims in Hindu religion in Awadh. “These programmes were organised in the Islamic era but no one had opposed then,” he claimed.

On Ram Temple issue, the speakers demanded that a temple now should be built on the disputed land in Ayodhya as there is a BJP government at the Centre, but Togadia said the VHP will not set any deadline for its demand.