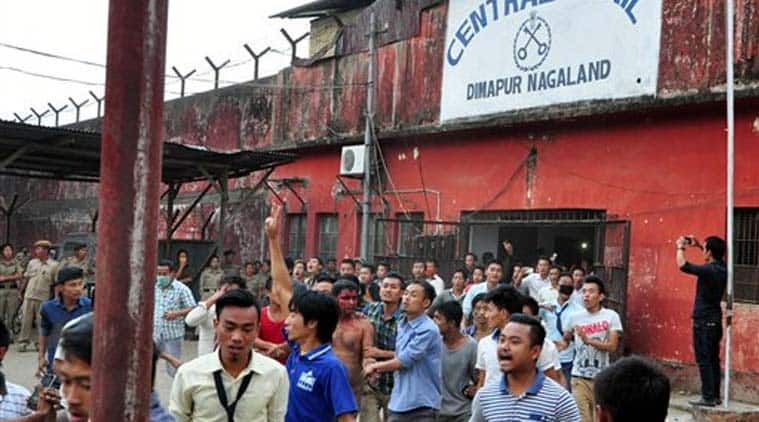 Members of a mob pull a man, centre with blooded face, accused of rape, out of the Central Jail where he was held in Dimapur, Nagaland. (Source: AP)

Syed Sharif Khan, the small-time used-car dealer who was lynched by a mob that barged into the Dimapur Central Jail here on Thursday afternoon, after he was accused of raping a tribal college girl, came from a family of Armymen. One of his brothers, the family said, had died serving.

“We are not Bangladeshi infiltrators. We come from a family of patriots,” Sharif’s brother Syed Suberuddin Khan told The Sunday Express.

He took Sharif’s body home, to Bosla village in Karimganj in south Assam, on Saturday, on a helicopter arranged by the Assam government.

Soon after the lynching, some groups had called Sharif an illegal Bangladeshi immigrant, while state DGP LL Doungel had said he was suspected to be so.

Suberuddin said Sharif was one of seven brothers and two sisters. “Our eldest brother who was in the Army died while in service, while two brothers, Syed Jamal Khan and Syed Kamal Khan, are with the Assam Regiment.” Their father Syed Hussain Khan served and retired from Military Engineering Service (MES).

Their district, Karimganj, shares a porous border with Bangladesh.

Syed Jamal Khan, who is posted in Shillong, said Sharif had been framed. “He was an honest person who took care of Suberuddin and another of our brothers, Nasir, and had opened small shops for them in Dimapur,” he said. Nasir used to stay with Shabir. Syed Kamal Khan is posted in Chhattisgarh.