The closure report comes at a time when reports have emerged of a slew of cases, allegedly involving Hindu extremists, falling apart. 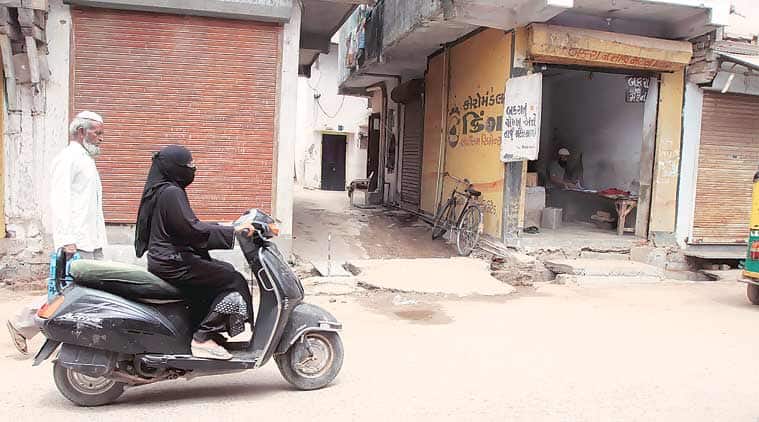 The site of the Modasa bomb blast.(Express Photo by: Javed Raja)

Gulam Mohammed Dholkawala, 51, remembers sitting on a scooter outside a mutton shop in Modasa’s Suka Bazaar when the locality was rocked by a blast. He could feel his cheeks burn and a loud ringing in his ears, which took weeks to go away.

Almost seven years have passed since the September 29, 2008 blast, but the trauma still haunts the victims.

The National Investigation Agency (NIA) has filed a closure report in the case, citing lack of evidence and the inability to trace the main culprits behind the blast, which claimed the life of 15-year-old Zainuddin Gori and left 10 injured in the month of Ramzan.

The special NIA court closed the case on April 22. The 16-page final report named no suspects but only said that “the complainant is the victim of the blast and is fortunate enough to have survived”.

The closure report comes at a time when reports have emerged of a slew of cases, allegedly involving Hindu extremists, falling apart.

Last month, Rohini Salian, Special Public Prosecutor in the case related to the Malegaon 2008 blasts, told The Indian Express that over the past one year, she has been under pressure from the NIA to go “soft” in the case.

There were striking similarities between the Modasa blast and the Malegaon bombing, which took place a day before. Both cases took place around the same time — 9.30 pm — and in both instances the explosives were concealed inside a motorcycle.

Dholkawala, who trades in chilli powder, said he is not surprised by how this particular probe concluded. “I got a letter from the Ahmedabad court dated April 16 asking me to appear before it, else the case will be heard and decided ex-parte. I went there on April 22 and was asked by the court if I had anything to say. I had nothing. I was informed the case has been closed for want of evidence. I already knew the result… no one was interested in proceeding with the investigation, not even the victims of the blast,” Dholkawala said sitting his home, not far from the site of blast.

Zainuddin’s mother Abida Gori said she came to know the case had been closed only from local reporters. “I have no idea who did it, but the incident snatched my son from me. Nobody from the government came to see us even once. (Congress member) Madhusudan Mistry once visited my relative, who was injured in the blast, and gave Rs 50,000,” she said.

According to the closure report, after two years of investigation, the Sabarkantha district police on April 26, 2010 filed a summary report and closed the case. The NIA was handed over the probe two months later. In the report, the NIA stated that it was unable to find evidence to chargesheet anyone.

The chassis number of a Hero Honda motorcycle used for the blast could only provide two digits — 03. Officials approached the Hero Honda plant in Gurgaon and eventually zeroed in on 71 bikes with the model number. They interrogated 70 motorcycle owners across the country but could not trace the 71st person. The NIA also examined 117 witnesses but couldn’t find any specific leads. The bike used in Modasa blast, police said, had a sticker on it with the number ‘786’.

Gujarat police officials who probed the case for two years said the NIA was unable to go beyond the investigation done by them.

During initial investigation, the NIA suspected the involvement of Sandip Dange and Ramji Kalasangra, also wanted in the Samjhauta blast case, but there were no leads to prove their involvement. Both of them have been on the run since 2008.

Mohammed Habib Meghareji, one of the eyewitnesses in the predominantly Muslim locality, described the explosion as “huge”.

“I tried helping the injured. I was called by the police at least 10 times, but I didn’t know anything. I didn’t see anyone parking the bike,” he said.

NIA officers confirmed that the agency had filed a closure report in the Modasa blast case, but refused to comment further.