MP linked women’s ‘maryada’ to toilets, but could not find the men to build them

Nomadic community who bathe only once every few days with soil. 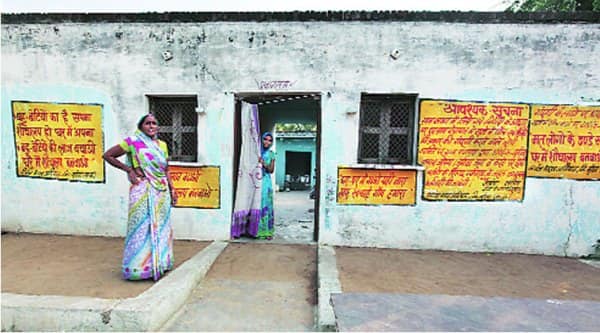 Meera Bhadoria outside her home in Nadkapura village, painted with slogans on sanitation. ( Source: Express photo by Renuka Puri )

Mohini Sahariya is in Class VI, one of the rare girls to reach middle school in her Maanpur village surrounded by the forests of Pahadgarh block in Morena district. Unlike most other members of her nomadic community who bathe only once every few days — with soil — she bathes daily, and as she points out, combs her hair “sometimes even twice a day”.

When it comes to going to the toilet though, Mohini has little choice. Every morning, the 13-year-old heads into the jungle along with her mother, aunts and grandmother. The women of Sahariya tribe don’t look for a clearing deep in the bushes or wait for the dark. It’s acceptable for them to go in groups, squat together and

A road being built nearby and other construction activity, however, have made Mohini more wary. She heads deeper in, she says, to protect herself from “prying boys and men who whizz past in bikes”.

Lately, she has enforced a change among the women of her family too. The Sahariyas usually clean with soil after their morning rituals, but she and her relatives now carry a lota of water to wash themselves.

Most of the panchayats of Pahargarh block are dominated by the Sahariya tribe. They are still to “even smell” the benefits of the UPA’s Nirmal Bharat Abhiyan (NBA), says Zakir Hussain of NGO Sujagriti Sansthan.

The Maryada programme encourages weekly meetings of women in villages, and toilets for women employees such as anganwadi workers and midday meal cooks at the village level. Says project incharge of the Total Sanitation Campaign division of Morena district, Kamal Yadav, “We see women as natural leaders. Our programme started with Nal Jal Yojana, focusing on providing toilets to 122 panchayats with access to water.”

The Sahariyas, notified as a special backward tribe by Madhya Pradesh, routinely hit the news over high incidence of malnutrition, and starvation death and pulmonary tuberculosis cases. Their children live on chillis with roti or rice. Mohini’s own diet of a daal made of dry roots or berries and bajra rotis is a treat in comparison. The families mostly live off forest produce, making around Rs 1,500 a month, apart from MNREGA wages.

Syaru and Kemara village from Pahargarh block won the Nirmal Gram Puraskar for ‘eliminating open defecation’ in 2009 and 2010 respectively, but in both, Sahariyas are not the dominant caste. Many of the houses where toilets were constructed under NBA, such as Mala Sahariya’s in Kemara, have stopped using them. “It is a 1-ft pit and the toilet has no electricity. I feel scared going in,” says Mala, 32.

Goth village in Ambah block in the Chambal region of Morena was awarded the Nirmal Gram Puraskar in 2009. Thakurs, more specifically the Tomars, dominate the village. Rekha Tomar, 35, one of the two cooks employed for midday meal at a primary school, stares wide-eyed when told of the Rs 9,100 grant she is entitled to for a toilet. A widow for 13 years now, and mother of two sons aged 13 and 18, she earns Rs 1,000 a month, and has never used a toilet in her life.

“No one from the government has come here,” she says. “NGOs have come, district officials visit, but I have only requested them to arrange my widow’s pension. I did not know there is a scheme for toilets.”

Astounded at the “big amount” allotted for a toilet, Rekha admits she probably wouldn’t use the money to construct one. “I would send one of my sons to the city first to make a living.”

About 60 km away, Labhakaran village in Kailaras block got the Nirmal Gram Puraskar in 2009. Homes here bear slogans of the Maryada campaign, such as “Save the honour of daughters, daughters-in-law; build toilets at home”.

But in the village with a population of 2,500, mostly OBCs such as Dhakars and Jatavs, most people have never heard of the Nirmal Gram Puraskar. While sarpanch Umesh Dhakar claims the Rs 1 lakh they received was used to install toilets and clean drains, there are few signs of either.

Kamla Dhakar came to Labhakaran as a young bride six years ago. She was a graduate; her husband, a farmer, dropped out after school. Shock awaited the 22-year-old. “I had a toilet in my maternal home. My parents checked everything about my prospective in-laws except a toilet,” she smiles.

“When I was newly married, my husband would come with me when I went out. Still it would take me an hour or two to gather the courage to squat. I wondered how my mother-in-law who didn’t take off her ghunghat before even her husband could squat so comfortably. People would laugh at me,” Kamla recalls.

Now she is used to their extended family of 10 depending on the fields. The family got Rs 1 lakh under the Mukhya Mantri Awas Yojana last year but, as Renu says, they built a pucca house with it. Her husband “never even considered” building a toilet.

Pradhan Umesh Dhakar says around 50 families from the village were sanctioned NBA funds to build a toilet in January — the second lot since 2009. But only Rs 4,600 for each has reached the panchayat. About 40 toilet seats and doors purchased with this money have been gathering dust.

Unlike states such as Haryana that transfer NBA funds along with MNREGA wages to accounts of beneficiaries directly, in Madhya Pradesh, the funds are sent to the panchayat account. This, officials say, is one reason the district has repeatedly failed to meet its targets for toilets, despite the Maryada campaign’s “strong and targeted branding”.

In Sabhalgarh block, bordering Rajasthan, four villages won the Nirmal Gram Puraskar — the highest in the district. In one of those, Kemari, dominated by Bramhins and OBCs, many Brahmins who do not own land defecate in the open. OBCs such as Jatavs who have homes have built toilets.

The biggest hurdle thus is not caste-related but cultural. In the Porsa block of Chambal, also dominated by Tomars, not one village has won the Nirmal Gram Puraskar. NBA efforts here have been intense. Kamal Yadav of the Total Sanitation Campaign says the Thakurs are difficult to convince, so they have targeted mothers-in-law, “who are the first to keep a check on their daughters-in-law’s honour”.

Meera Bhadoria of Nandkapura village is one such mother-in-law. Standing next to the Maryada slogans painted on her house walls, she talks at length about how defecating in the open is embarrassing. The moment she realises The Indian Express questions are not regarding a survey though, she breaks into a loud laugh. They have a functional toilet at home, she says, but she has not been letting her daughter-in-law use it since last year. She hopes to get the Rs 9,100 from the government this way for a toilet.

“If she does not go to the field, we will lose out on the Rs 9,100 just because our forefathers were silly enough to build a toilet before anybody in the village,” she says. “I make her wear two ghunghats and go out with her. It’s a small sacrifice.”