India and the UAE today came down heavily on countries sponsoring terrorism against other states in what is seen as an oblique reference to Pakistan. 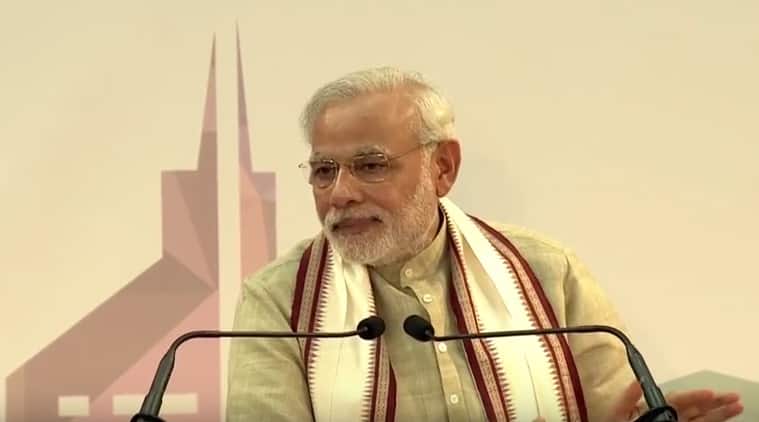 Prime Minister Narendra Modi who is in UAE for a two-day visit, today interacted with the Indian diaspora at the Dubai cricket stadium. Around 50,000 people registered to attend the event.

Here are highlights of PM’s speech

10:34 pm: Big applause by the crowd after PM’s address

10:32 pm Have asked for a welfare fund for those languishing in jail for their unawareness of rules: Modi

10:26 pm E migrate portal has been started for Indian diaspora to avoid the inconvenience of going to migration office: Modi

I know you have many complaints regarding Embassy (Crowd answers ‘No’), It’s good if you don’t have any, but in case you have..PM Modi

10:19 pm I urge all of you to gift saving scheme to your sister this Raksha Bandhan and secure their future: Modi

World’s inclination towards India has increased, we must take advantage of this and take our nation to new heights of development: PM Modi

10:15 pm We will launch a SAARC satellite that will benefit all the SAARC nations in agriculture, education and other sectors: Modi

10:13 pm Afghanistan is another disturbed nation… But we have not deserted Afghanistan in their tough times: Modi

10:12 pm: There were water crisis in Maldives..but we didn’t let them thirsty: Modi

10: 08 pm After Rajiv Gandhi, there has not been any stand alone visit by any Indian prime minister in Sri Lanka. They are our neighbour. I went to Jafna and listened to the woes of people there: Modi

10:01 pm: Every conflict can only be resolved through peaceful dialogue: Modi

10:00 pm: Border dispute with Bangladesh was a long pending issue. But we came up with a final solution on August 1: Modi

9:59 pm: I want to give the example of a group of insurgents in Nagaland who are now in mainstream after several rounds of talks: Modi

Nagaland was dealing with insurgency for a long time, recently a treaty was signed to ensure peace in North-eastern region: PM Modi

9:57 pm: I heard about Bangkok blast in the evening. It’s time we all should come together in fight against terrorism: Modi

9:56 pm: India has been dealing with terrorism for long: Modi

9:54 pm: India is a young nation. Over 65 percent population is of youth: Modi

9:48 pm: India’s bid for permanent membership in UN council is along pending. I feel great with UAE supporting India’s cause: Modi

9:41 pm: Those involved in terror activities must be punished: Modi

9:38 pm: I request you all to give a standing ovation to the Abu Dhabi prince: Modi

9:38 pm: The gesture shown by the prince is really admirable: Modi 9:37 pm: When there is terror activities all over, Abu Dhabi prince offered land for temple: Modi

There are 700 flights between India & Dubai but it took 34 years for an Indian PM to come here: PM Modi #ModiInUAE pic.twitter.com/stOXjmRWXh

9:29 pm: People from Kerala here are in large number. I wish them a Happy Kerala day: Modi Many sanctions were imposed on India, nation was facing economic threats, Atal ji then called on Indian community spread across World: PM

When Atal ji was PM, India conducted a Nuclear test, the World was shocked, some people were even angry about that: PM Modi #ModiInUAE

9:21 pm: It’s because of you people, Indians back home feel proud: Modi

Earlier in the day, Modi addressed the business leaders from the UAE at Masdar City.

The prime minister said that India has an immediate investment opportunity of $1 trillion and the government will take urgent steps to address concerns of the businessmen from this country and erase “deficit of 34 years”.

Modi also said his government has got some problems in legacy and his immediate priority would be to kickstart the things which were stalled by the “indecisiveness and lethargy” of the past governments.