Arif, an engineering student, was one of four men from Thane who went missing from their homes in May. 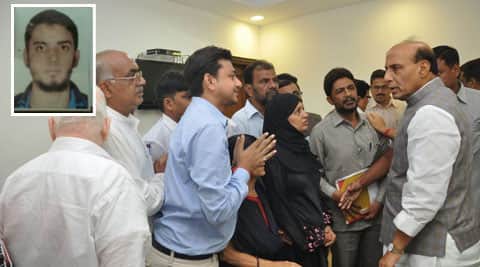 Arif Ejaz Majeed, one of the four young men from Kalyan near Mumbai who were thought to have joined insurgents of the Islamic State in Iraq and Syria (ISIS), has reportedly been killed in fighting in Iraq.

Arif, an engineering student, was one of four men from Kalyan who went missing from their homes in May. Arif’s family — along with the families of the other three men, Fahad Tanvir Sheikh, Aman Naim Tandel and Saheem Farooq Tanki — went to the police some days after they disappeared.

The Indian Express first reported the disappearances on July 14.

Iftikhar Khan, an uncle of Fahad Sheikh, said the news of Arif’s death in Iraq was conveyed by Saheem Farooq Tanki, who called his family in Thane on Tuesday night.

“Saheem called us at 6 pm on Monday and told us about Arif’s death. He was sobbing throughout and asked us to go and inform Arif’s family. He later called us at once again in the night to check if we had informed his (Arif’s) family,” Kashif Tanki, a relative, said.

Saheem’s family passed on the information both to Arif’s family and to the Kalyan police.

Friends of Arif’s family said that his father, who is a doctor, was shattered by the news and was inconsolable. The family performed Arif’s last rites in absentia on Wednesday.

The Indian Express first reported the disappearances on July 14.

“The Ghaibaana Namaaz-e-Janaaza, which is a funeral prayer for times when the body is not available, was offered after the Zuhr (afternoon) namaaz by the family,” said a resident of the housing society in which the Majeed family lives. Members of the families of the other three youth were present at the namaaz, neighbours said.

The Bazaarpeth police have recorded the statements of Saheem’s family, and were on Wednesday attempting to verify the report of Arif’s death. “Saheem said that he had made inquiries about Arif’s whereabouts and well being, and learned that he had died. Saheem did not have any more details. There has been no official confirmation yet from any of the investigating agencies,” Iftikhar Khan said.

The four families live in the same Dudh Naka-Govindwadi area of Kalyan (West). The Maharashtra Anti-Terrorism Squad had picked up laptops and pen drives from the youths’ homes on the evening of July 14. Late on July 18 evening, Arif’s father, Ejaz Badruddin Majeed, had met Home Minister Rajnath Singh in Delhi, and handed him a letter, reportedly seeking action against the people who had radicalised his son and persuaded him to join the jihadis in the Middle East. Before leaving home, Arif had left behind a letter saying “fighting has been enjoined upon you”, and telling his mother that the “angel of death” will ask him why he didn’t migrate to “Allah’s land”. In the letter, the son told his family, “May we all meet in Paradise.”

ISIS, the ruthless Sunni extremist militia which Arif, Fahad, Aman and Saheem were believed to have joined, now calls itself the Islamic State (IS). It shocked the world this month by uploading on the Internet a video of the grisly beheading of American journalist James Foley.

Police sources had told The Indian Express last month that the four men flew to Baghdad on May 23 as part of a group of 22 pilgrims intending to visit religious shrines in Iraq. Arif had called his family from Baghdad on May 24, apologising for having left without telling them.

He had claimed he had travelled in the hope of finding a job there. He had phoned again on May 25, this time to reassure his family that he was well.

Later that evening, other pilgrims on the trip told investigators, Arif, Fahad, Aman and Saheem had hired a taxi to Fallujah, a city west of Baghdad which has emerged as the epicentre of Iraq’s deadly insurgency. The four Kalyan men had gone silent thereafter. Iraqi intelligence had found Arif’s cellphone connected to a tower in the Mosul area before going dead — and on Wednesday, intelligence sources in India said Arif’s death had likely occurred in the same area.

“The radicalisation of the youths seems to have taken place online,” a Maharashtra Police official had told The Indian Express in July, “with news of atrocities in the region inflaming their passions”.

Last year, Pakistani al-Qaeda ideologue Asim Umar had called on Indians to join the global jihad. The ISIS has cited India as a key concern for global jihadists. In Internet chatrooms where Islamists congregate, messages have been posted calling on Indians to join up, to prepare themselves for what is being described as the coming communal apocalypse.

Internet propaganda has drawn thousands of young people from distant countries to the conflicts in Iraq and Syria. Hundreds of volunteers from Europe, the UK, US and Australia have been reported to be participating in the wars, along with some numbers of Pakistanis. Foley’s murderer is said to have had a South London accent.

In his letter, Arif appeared to reject his family’s values. “I cried when I saw you all sinning, smoking cigarettes, taking interest, watching TV, illegal sexual intercourse, living luxurious lives, intermingling of sexes, not praying, not growing beards.These things will lead to you burning in the hell-fire,” he said.

He had harsh words, in particular, for his sister, and female cousins, who all watched television, “a professional way to ensure nudity, lewdness, obscenity and disbelief prevail. It is a major sin. In it is music, which is an instrument of Satan”.

“He was a good boy,” Arif’s father had said then. “He was very religious, never spent time in bad company, never chased after girls, never seemed attracted to violence.”

“O Mother,” Arif wrote. “The sun is setting in the backyard of our house, behind the mountain and I have told my friend that we will meet there for our greatest journey. It is a blessed journey for me because I don’t want to live in this sinful country. At the time of my death, the angel of death will ask me why I did not make hijra (migrate) to Allah’s land, which is spacious.” Deepak JoshiDeepak Joshi is an Indian Express photographer based out of Kalyan... read more