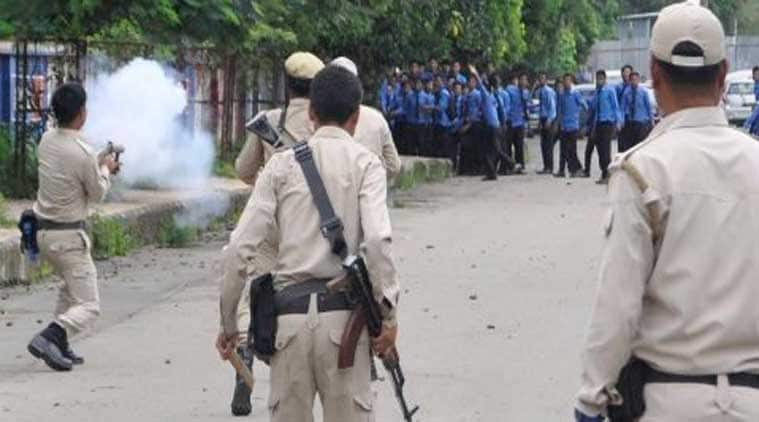 The victim was hit on his face by tear gas shells lobbed by the police to quell a protest. (Source: PTI)

A 17-year-old boy was killed as protests in Imphal demanding the implementation of the Inner Line Permit (ILP) — a travel document to restrict entry of ‘outsiders’ in the state — took a violent turn on Wednesday.

Sabam Robinhood, 17, was among several students who hit the streets demanding introduction of ILP system in Manipur.

Sabam, a Class XI student from the Anand Singh Higher Secondary Academy, was hit in his face by a tear gas shell during a police crackdown. He was rushed to the nearby Raj Medicity hospital, but declared dead on arrival.

Fearing more violence after the student’s death, the Manipur government imposed an indefinite curfew in the Greater Imphal area — the city limits of Imphal West and East districts.

In March, the state passed a bill making it mandatory for all non-Manipuris to register themselves with the government upon entering the state.

“This bill is not acceptable to us. It does not protect the rights of the indigenous people of the state. It simply talks about registration of outsiders and that landlords should register their tenants, if they happen to be outsiders. But we don’t want this. The migrant population is becoming the same strength in numbers as the Manipuris. We want nothing less than an ILP to be imposed — like it exists in Nagaland or Mizoram,’’ says Ratan Khomdram, the convener in-charge of the Joint Committee of the Inner Line Permit (JCILP) – the body that is spearheading the movement in the state.

The JCILP has been advocating ILP for the past five years. But the protests became aggressive recently with the mobilisation of school and college students.

Khomdram claimed that as many as 100 schools and 10,000 students, all belonging to Class XI and XII, took part in Wednesday’s protests. He further said that 100 people were injured in the police crackdown.

The student protest had turned violent with youngsters pelting stones at the police and destroying public property. The cops retaliated with tear gas shells as the protesters began marching towards the State Assembly.

Thirty injured students, including Sabam, were rushed to the nearby Raj Medicity. While 21 students were discharged, nine are still undergoing treatment. “The police started firing tear gas shells. I was very scared and started running towards the gates of my school which is nearby,’’ said Regina Nongmeithem, a Class XII student.

At 28, this airport constable made Rs 8 crore