Indian IS recruit ‘killed’ in Syria was from Bhatkal

Armar is the second Indian jihadist confirmed to have died fighting overseas, after Anwar Husain. 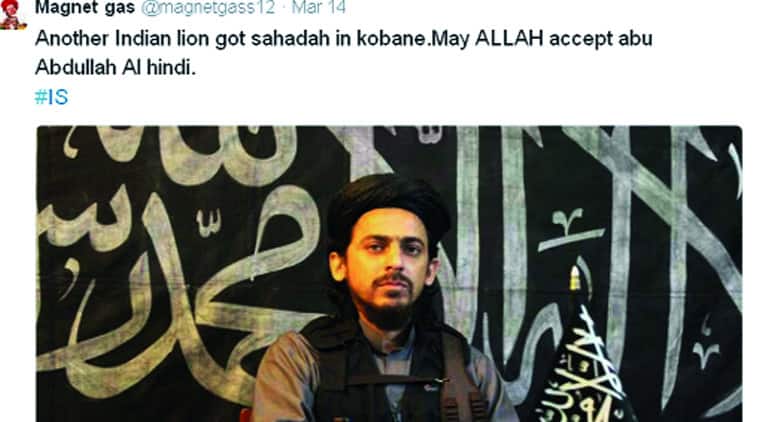 The image tweeted by @magnetgass12 on Saturday.

The Indian jihadist reported killed while fighting for the Islamic State (IS) earlier this month has been identified as Sultan Abdul Kadir Armar, 39, from Bhatkal town in Karnataka, intelligence sources have told The Indian Express. In a statement released online on Thursday, Indian jihadist group Ansar al-Tauhid fi’Bilad al-Hind said Armar was killed during fighting at Kobane, on the Syria-Turkey border, on March 6.

Last year, The Indian Express had reported that Armar was suspected to be the masked jihadist who appeared in a series of propaganda videos produced by the hardline jihadist group, Ansar al-Tauhid, inviting Indian Muslims to train at jihad camps in Pakistan’s North Waziristan.

“His intense urge to establish Islam and the pathetic condition of the Muslim ummah (nation) forced him to leave behind his loved ones, seeking Allah’s pleasure and eternal paradise,” says the statement.

Family members said they had no information on Armar’s death. “I have not heard from them for nearly six years. I don’t know where they are. They don’t send me any money or call me,” his mother, Hajira Armar, told The Indian Express in Bhatkal last month.

Armar is the second Indian jihadist confirmed to have died fighting overseas, after Anwar Husain, also a resident of Bhatkal. Husain, a one-time minivan driver, was killed in the summer of 2014, fighting alongside jihadists near Kandahar in Afghanistan. Police and intelligence services are also investigating unconfirmed reports that Shaheem Tanki, one of the four Thane youths who left to join the Islamic State (IS) last year, may have been killed in the battle for Kobane.

Born on December 7, 1975, Armar grew up in Bhatkal’s Nawayath Colony. The son of Shabbir Husain Armar, a small businessman, he studied at the famous Nadwat-ul-Ullema seminary in Lucknow. In 2004, Armar and his brother Shafi Armar joined the Indian Mujahideen (IM), founded that year by one-time Mumbai gangster Riyaz Shahbandri and his cleric brother, Ismail Shahbandri.

A fugitive in Pakistan since 2008, Armar was part of a group of IM operatives who broke with the organisation to form the IS-affiliated Ansar al-Tauhid. Last year, the new Ansar al-Tauhid group, then based at Tehreek-e-Taliban’s training camps in Pakistan’s North Waziristan, declared their affiliation with the IS and called on Indian Muslims to join the organisation. Armar is reported to be the man in the videos, his face digitally masked, a laptop to his left, religious books to his right, and a Glock 9mm automatic on his desk.

“Rise,” he said in one speech, “like Ahmad Shah Abdali and Muhammad ibn-Qasim, like Syed Ahmad the martyr, like the Prophet and his companions, take the Quran in one hand and the sword in the other, and head to the fields of jihad”.

He urged new recruits to “teach these Brahmins and worshippers of cows, as well as the whole world of unbelievers, that the Indian Muslim is no coward”. The videos were released by Ansar al-Tauhid’s media wing, al-Isabah Media, run by Armar’s brother.

Armar’s alma mater, the Nadwat-ul-Ullema seminary, has emerged as a hub of pro-IS theology. Last year, influential seminarian Maulana Salman al-Husaini Nadwi wrote a letter hailing IS leader Ibrahim Awad al-Badri as the Amir ul-Momineen, or commander of the faithful. In the letter, al-Husaini urged jihadist groups to bury their differences and unite behind al-Badri “as long as he follows Allah’s sharia”.

From internet chats that the NIA claims to have recovered from alleged IM operative Siddibapa, the Ansar al-Tauhid seems to have arisen from the rank-and-file’s disillusion with IM co-founder Riyaz Shahbandri. The marriage of Iqbal Shahbandri to a Karachi hairdresser who did not wear a veil also infuriated the dissidents.

In 2011-12, several members of the group left for North Waziristan, from where they released several training videos. In December last year, when some elements of the Tehreek-e-Taliban allied with the IS, they made their way to Syria.

The Ansar al-Tauhid group now in Syria is believed to include several Bhatkal men, including Afif Hassan Siddibapa, also known as Afif Jilani, a 41-year-old businessman who left a job in Saudi Arabia, and took his wife and children to Karachi to join the IM.

Shahnawaz Ahmad, a Unani doctor and the son of a local Samajwadi Party politician in Uttar Pradesh’s Azamgarh, Abu Rashid Ahmad, who once worked at an eye hospital in Mumbai, and students Mohamma‘ ‘Bada’ Sajid and Mirza Shadab Beig are also alleged to be fighting in Syria.