Police said they have launched a manhunt, with Rs 1 lakh as reward for Rajendra Kaswa, who had allegedly stored mining gelatin sticks in the shop. 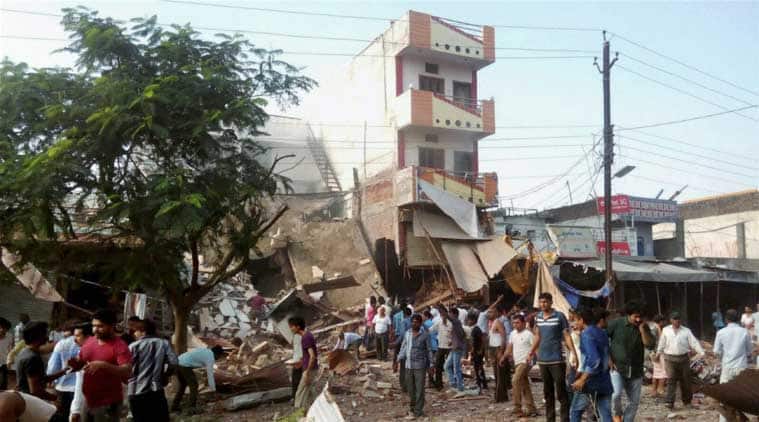 Locals gather near a collapsed restaurant where a cooking gas cylinder exploded in Petlawad town in Jhabua district of Madhya Pradesh on Saturday. (Source: PTI)

The three-storey building near the crowded bus stand in Jhabua district’s Petlawad, where explosive material was allegedly stored illegally and triggered a massive blast that killed 89 people on Saturday, is no more.

The man who allegedly stored the explosives there and his family are missing, too — so are their relatives.

While whatever was left of the building was pulled down on Sunday in search of survivors, police said they have launched a manhunt — with Rs 1 lakh as reward — for Rajendra Kaswa, who had allegedly stored mining gelatin sticks in the shop.

The fallout of the blast also appeared to be snowballing into a political controversy with the opposition Congress alleging that the Madhya Pradesh government had “gone soft” on Kaswa since he was a member of the BJP-affiliated local traders’ body and a former RSS member. The BJP responded by denying that Kaswa was associated with the party and accusing the Congress of “playing politics over dead bodies”. 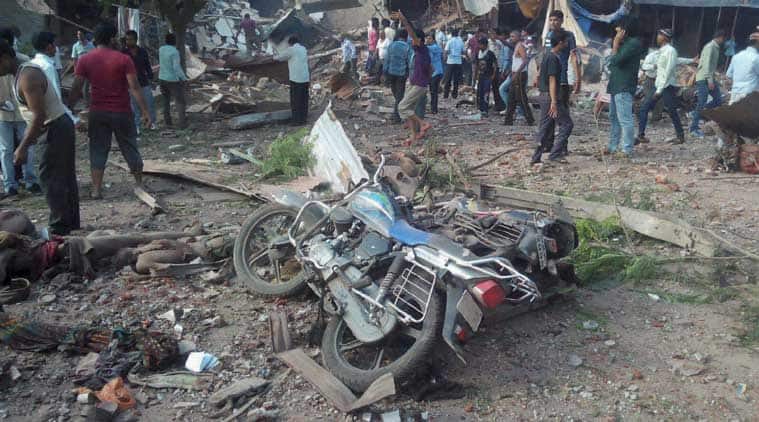 Chief Minister Shivraj Singh Chouhan was also heckled by residents as he arrived to offer his condolences.

Amidst all the anger, sorrow and speculation, Kaswa’s friends and neighbours claimed that the fertiliser merchant had lost his eldest brother to a similar blast years ago.

“Rajendra’s eldest brother Zamaklal used to deal in potash. He died when explosives went off at his home some years ago. At the time, the family used to live elsewhere in town, near Kisan Mohalla,’’ claimed Sumal Shukla, adding that he knew the family well and was once a classmate of Zamaklal.

While police said they were still collecting details about the family, the house where Kaswa was staying with his wife and two children, on Rangrej lane nearby, was sealed today with three policemen posted outside. Police said they also recovered “several detonators” from the premises.

Police said that Kaswa’s two elder brothers, who live in large bungalows in the posh Mahavir Colony in another part of town, were absconding too, along with their families. 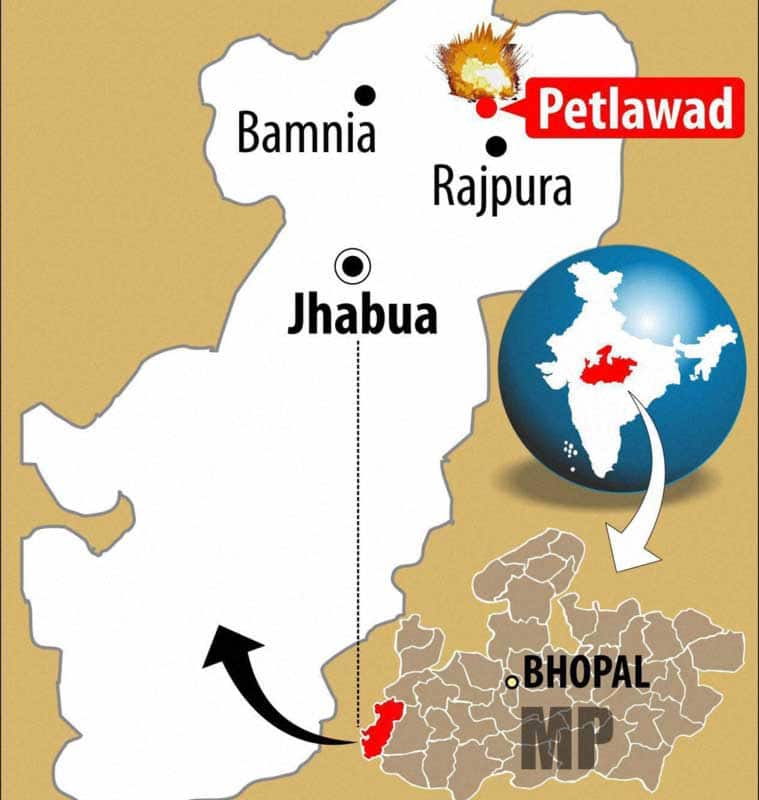 Adding to the speculation surrounding Kaswa was the lack of official clarity on whether he possessed a licence to store explosives — a senior police officer said that even if he did, storing them in a residential building was “illegal”.

“He has a licence valid till 2020, I don’t know from where he obtained it,’’ said additional SP Seema Alawa. But an official of the Petroleum and Explosives Safety Organisation (PESO), which is authorised to issue these licences, said that it had not issued any permit to Kaswa.

Kaswa’s neighbour, Soham Bam, said that after the explosion he took Kaswa’s wife and children to his brother’s house in Mahavir Colony. “I did not see Rajendra. At the time, I thought the explosion was caused by LPG cylinders,’’ said Bam.

Gopal Rathod, the younger brother of Gangaram Rathod who had rented the shop to Kaswa, said they did not know that he stored explosives in the shop. ”Why would we rent the shop to him if we knew he was storing explosives?” asked Gopal, an ex-serviceman.

Chief Minister Chouhan, meanwhile, had a tough time when he arrived in the town before noon to meet the relatives of victims of the blast, and the injured.

Chouhan’s route was blocked by residents who raised slogans against the administration and sought “immediate action” against the officials who “failed to act” when the issue of explosives — mainly for drilling wells — being stored in residential areas had previously been reportedly raised with the sub-divisional magistrate (SDM).

Chouhan finally sat on the street to pacify the protesters, and later managed to defuse the situation by announcing a series of measures, including enhanced compensation of Rs 5 lakh for relatives of the dead, and a job for one member of each family of the dead.

He also ordered the transfer of the sub-divisional magistrate and sub-divisional police in-charge, and shunted out the entire staff of the Petlawad police station.

The explosion, however, continued to generate political heat with the Congress accusing the BJP of “abuse and misuse of power” and the ruling party responding by blaming a “frustrated” Opposition for levelling “baseless allegations”.

“Despite complaints against Rajendra for illegally storing explosives, the administration did not act. His brother’s death in the past was hushed up, too,’’ alleged state Congress chief Arun Yadav.

In Delhi, Congress spokesperson Abhishek Singhvi alleged that the blast occurred because “a BJP leader” was allowed to store explosives in a busy area against the rules.

Responding to the allegations, BJP state chief Nandkumar Chouhan said: “The Congress party is frustrated by a series of electoral reverses. Rajendra Kaswa is an accused and has nothing to do with either the BJP or the RSS. The state government has already ordered a judicial inquiry.”