BJP said that the probe into the causes of this manmade disaster is important to fix responsibility. 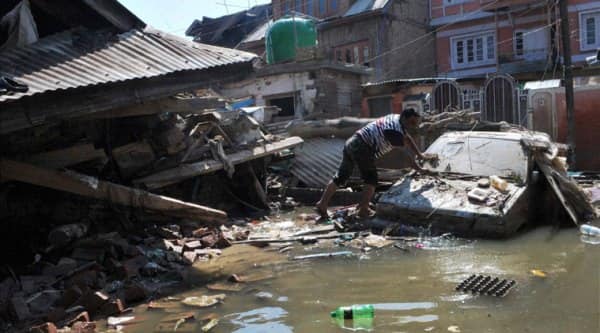 The flood furry has so far resulted into the death of nearly 300 people, besides wide spread devastation across Jammu Kashmir. (Source: PTI)

Raking up a controversy against Omar Abdullah government which is already in the dock for total collapse of its administration during the initial days of recent flood fury in Jammu and Kashmir, the state unit of Bharatiya Janata Party on Friday held it responsible for the calamity and demanded an impartial probe by a sitting or retired supreme Court judge into its causes.

The flood furry, the worst in the last six decades in the state, has so far resulted into the death of nearly 300 people, besides wide spread devastation across Jammu Kashmir.

Claiming that the recent unprecedented floods in Kashmir valley, particularly in Srinagar city, could have been prevented, BJP’s state spokesperson and senior party leader Farooq khan quoting flood control experts including retired senior engineers described the calamity as “manmade disaster”. “It was because of vested interests that three state government departments – Economic Reconstruction Agency(ERA), Roads and Bridges (R&B) and Flood Control, for the reasons best known to them partially blocked the flood channel by constructing a road across it at Mehjoor Nagar in Srinagar city, thereby causing a back flow of flood waters,’’ he said.

While ERA is supervised directly by Chief Minister Omar Abdullah, R&B is headed by Abdul Majid Wani as Minister and the Flood Control Department working by Minister Sham Lal Sharma, he added.

Significantly, all this happened when the flood waters too nearly seven hours to reach Srinagar city  after their getting first noticed crossing the danger mark at Sangam. Despite having enough time to prepare and respond to the coming danger, the government machinery especially its essential and emergency services miserably failed to react and finally leading to a situation which has no parallel in the history of state with the people of Srinagar city still marooned in many localities, he regretted.

Khan said that an impartial probe by a sitting or retired Supreme Court judge into the causes of this manmade disaster has become all the more important so as to fix responsibility in the matter. Listing  issues to be probed by the inquiry commission, he asked how ERA in connivance with R&B Department was allowed by Flood Control Department to construct a road cum dam across the flood channel when caqusing any obstruction into it amounts to a criminal offence? He also sought an inquiry into the role of ministers as well as the Chief Minister in taking “this criminal decision’’ instead of going for the construction of a bailey bridge or a boat bridge at the same spot. Was seven hours warning time not sufficient to remove this obstacle? he asked.

Pointing out that the party had so far been avoiding highlighting incompetence of the state government and concentrating only on relief and rehabilitation measures, the BJP leader the matter has been brought to its notice by people from all over the state. Holding state government machinery responsible for the present miseries of the people, he accused it of distributing relief material among victims of natural calamity on political considerations by adopting a pick and choose policy. While living upto the assurance given by Prime Minister Narendra Modi during his visit to Kashmir following floods, the Government of India is responding to all the demands of the state government favourably, the latter’s top heavy machinery is failing to handle the simple task of receiving and distributing the relief material, including food supplies which are coming in abundance from all over India, he added.

It is a pathetic state of affairs that while thousands of tones of foods grains are getting damaged at Udhampur Railway Station, the people in both Jammu  region and Kashmir Valley are made to run from one office to another for getting the relief sanctioned. And after endless visits, they are provided a meager relief package of 5 kg rice, 1 kg dal and 1 litre edible oil etc, thereby virtually converting highly respectable and self respecting people of both the provinces into beggers, he said and warned the state set its house in order otherwise the day would not be far when the public anger across the state would consume it.