Jagendra Singh: Paan shop to reporter to his death 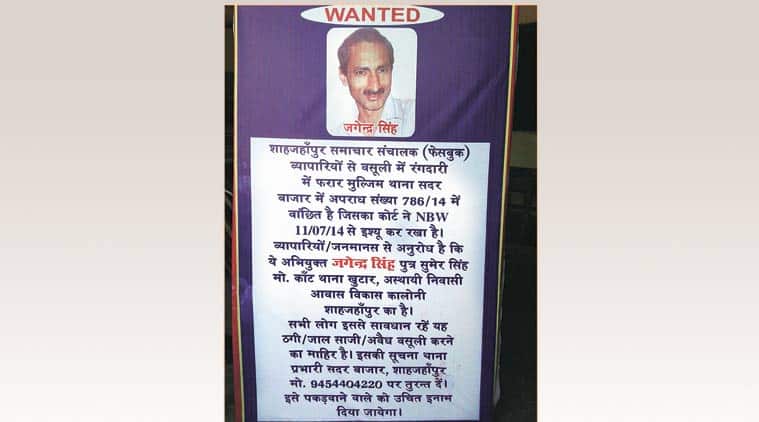 Sometime in August 2014, a mysterious poster came up all over Shahjahanpur, a town in central UP. Against a deep purple background, the poster prominently featured Jagendra Singh, a freelance journalist who allegedly killed himself on June 1 this year after accusing an Uttar Pradesh minister of harassment.

“WANTED,” the poster said, with a message saying Singh had a non-bailable arrest warrant against him issued by a Shahjahanpur court for extorting money from traders and that he was on the run. It ended with a warning — “Yeh thugi/jaal sazi/avaidh vasooli karne ka mahir hain (he is a master extortionist)” — and a message asking people to keep away from him. A probe set up by the police to find out who had put up these posters soon fizzled out.

The case mentioned in the poster, FIR No. 786/14, is one of the seven criminal cases registered against Singh, four of them before 2010, when the man who ran a paan shop turned journalist.

Singh, whose death had triggered protests following which Chief Minister Akhilesh Yadav announced an ex-gratia payment of Rs 30 lakh to the family and government jobs to his two sons, was known for the ‘news-items’ he posted on his Facebook page Shahjahanpur Samachar, mostly charges that he flung at his rivals.

A native of Khutar, a village 40 km from the district headquarters in Shahjahanpur, Singh, after an ITI course in 1989, worked with a private firm in Amroha district for four months. He quit that job and returned home where he ran a tea- and paan-shop for a few months. Later, his father Somer Singh said, Singh opened a kirana shop.

Somer Singh said that in 2008, after a fight with a local criminal in which Singh was injured, he shut his shop and started working for Amar Uajala as a stringer. In 2010, he got in touch with Sardar Sharma, bureau chief of the Shahjahanpur-based Hindi daily Swatantra Bharat, who gave him the job of a reporter in Shahjahanpur town. According to Sharma, Singh left his family behind in Khutar and moved to his father’s one-room flat at Awas Vikas Colony in Shahjahanpur town, the same house in which he allegedly immolated himself.

“He worked with me for two years, during which Jagendra got into the habit of settling his personal disputes through the stories he wrote. We got legal notices for at least two of his stories and we had to apologise and publish a corrigendum,” said Sharma. One of the stories, Sharma said, was about a woman who Singh said had been ‘raped’ by a police constable. “It later turned out that the woman had never made such an allegation,” said Sharma.

Even after Singh was asked to leave, Sharma said he kept in touch. “He used to visit me every month. He would create a scene and force me to part with money. Just to keep him away, I would give him Rs 1,000.”
Over the next few months, Singh worked for three more Hindi dailies – his younger son Rahul displayed his father’s identity cards issued by ETV and Nav Bharat, among others. Singh’s wife Suman said her husband could not keep any of his jobs for long because of his “short-temper”. “All I know is that he used to earn between Rs 20,000-25,000 every month,” she said.

It was around 2013 that Singh started posting news articles on his Facebook page. UP minister Ram Murti Verma was the target of over 25 of his Facebook messages, posted between May 7 and June 1, the day the police arrived ay his doorstep to arrest him in an earlier case of kidnapping. In these posts, Singh has accused Verma of land grab, “sheltering criminals” and “abusing women”.

Shahjahanpur district magistrate Shubhra Saxena said, “The district administration has never taken cognizance or ordered any inquiry into any of the reports filed by Jagendra on his Facebook account.”

The first of the seven cases against Singh was registered on July 10, 1991, filed on the basis of a complaint by Singh’s neighbour Krishna Nand Rathore at Khutar police station. Rathore accused Singh and his father Somer Singh of breaking into his house and taking away cash, jewellery and other valuables. The police found the allegation to be false and filed a closure report the next day.

The second case, filed by Ram Sagar of Khutar, accused Singh and his father of assault. A Shahjahanpur court, however, acquitted both of them in August 1997.

In 2001 and 2005, two Non-cognizable Reports were filed against Singh for alleged criminal intimidation. A local court acquitted him in the first case while the second case is pending in court.

The case mentioned in the 2014 poster was based on a complaint filed in May 2014 by Sachin Batham, president of the Shahjahanpur Business Association, against Singh and one Satya Pal Mishra, alleging that the two tried to extort money from him. While Mishra was arrested and sent to jail, the non-bailable warrant issued against Singh was never executed.

This year, the Shahjahanpur police registered another case against Singh. It’s this case that brought them to Singh’s doorstep on June 1. On May 10, the police registered an FIR on a complaint by one Amit Pratap Singh Bhadouria, who alleged that Singh and two others attacked and kidnapped him near Awas Vikas Colony. The case has since been transferred to Bareilly. Singh’s son Rajvendra alleged the case against his father had been lodged at the behest of minister Verma.

After Singh was rushed to hospital for treatment, an FIR was lodged against him for “attempt to commit suicide”, “assault or criminal force to deter public servant from discharge of his duty” and “criminal conspiracy”.

A day later, the family called off their eight-day long dharna at Khutar after the district administration handed them the cheque of Rs 30 lakh. Singh’s sons were also given two arms licenses and the family’s five-acre land, which was illegally acquired, was released.

When asked why they had called off their dharna when their demand for a CBI probe hadn’t been met, Singh’s elder son Rajvendra said, “The motive for staging dharna was to get justice. The Chief Minister has promised us a fair investigation.”