Rajnath Singh said the youth should not undermine the value of India’s ancient knowledge. 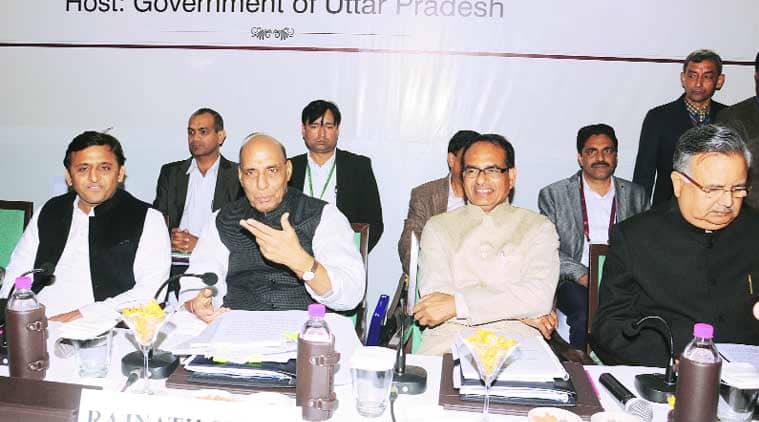 Rajnath Singh with CMs of UP, MP and Chhattisgarh at the Central Zonal Council meeting in Lucknow. (Source: Pramod Adhikari)

Indian pundits and panchangs (ephemeris) can give better information on cosmological activities than US observatories, Union Home Minister Rajnath Singh said on Monday, noting the contributions the country made in the fields of astronomy and mathematics.

Delivering the convocation address of Lucknow University, he said the youth should not undermine the value of India’s ancient knowledge. “When an American observatory tells you about solar or lunar eclipses, the media becomes all excited; the youth of our nation praises the science and technology of America. But, consult your next door pundit, who will open his panchang (ephemeris) and he will tell you about solar eclipses hundred years ago and hundred years into future.”

Be it trigonometry, algebra or other theorems, no other country could match knowledge which India possesses, he said, asserting, “Indian cosmological calculations are in tune with modern scientific calculations.”

Citing example of highly-educated youth involved in terror activities, the Union minister said that knowledge devoid of “sanskar (values)” is disastrous for society. “There is a crisis in our nation today, the terror activities are increasing and so is extremism and radicalisation. A section of youth is making the nation proud the world over in the field of information technology, health and science while the other section of youth is obtaining hi-tech degrees and is involved in terrorism, extremism and radicalisation,” he said, reiterating the statement he made a week ago at the convocation of Babasaheb Bhimarao Ambedkar University here.

Rajnath said “only education and sanskar together can deal with this problem. When it comes with values, education benefits the society but if it is not, it is destructive.”

“Civilisations which get cut off from their traditions and values do not survive for long. It was India which showed a big heart and gave message of Vasudhaiva Kutumbakam (the world is one family),” he said, and also objected to “hi-and-bye culture”, suggesting youth should touch parents’ feet as a mark of respect. “Jo jhukna nahi jaante, woh toot jaate hain,” he said.

He also exhorted the youth to work with a positive mindset. “If two people ‘a’ and ‘b’ decide to work together and with a positive mindset [(a+b)²], then not only the personality of both ‘a’ and ‘b’ is developed [a²+b²] but it also leads to an additional gain of energy in the form of 2ab,” Singh, a former teacher, said, citing the quadratic equation (a+b)² = a²+b²+2ab.