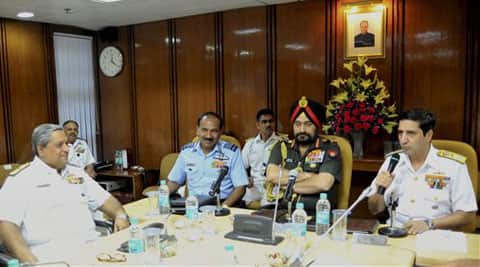 Army chief General Bikram Singh will visit China from July 2 to 5 and will exchange views with Chinese leaders on bilateral ties, regional security and other issues, the defence ministry said on Thursday,

Singh will be the second army chief to visit China after former army chief General N C Vij visited the country in 2005.

The army chief, who is also chairman of the committee of chiefs of staff of the Indian armed forces, will exchange views with Chinese leaders on bilateral ties, regional security and other issues of common concern, Chinese Defence Ministry spokesman Yang Yujun said at a media briefing here.

As 2014 is the Year of Friendly Exchanges between China and India, the two defence ministries and armed forces will hold a series of exchange activities, state-run Xinhua news agency quoted Yang as saying.

Yang said the two sides are in touch with each other to arrange activities, which will include joint anti-terrorism exercises.

The visit of Singh, who is slated to retire next month, is taking place when the new Indian government and the Chinese government were set to give a major push to high level political and military exchanges to give a new thrust to relations.

Singh’s visit was announced as Vice President Hamid Ansari arrived on Thursday in China on a five-day visit during which he
would attend the 60th year celebrations of Panchsheel, the five principles of peaceful coexistence and hold talks with Chinese President Xi Jinping and Premier Li Keqiang.

Prime Minister Narendra Modi will be meeting Chinese President Xi Jinping on the sidelines of the BRICS summit in Brazil next month.

Defence ministries of the two countries had numerous exchanges in the last two years with visits by both defence ministers to each other’s countries.

India will host the fourth Hand in Hand (HiH) counter-terrorism exercise between the two armies later this year.

Both sides have held three military exercises so far. Singh’s visit is expected to focus on the implementation of the Border Defence Cooperation Agreement (BDCA), which was signed last year when the then Prime Minister Manmohan Singh visited here.

The agreement outlined detailed steps by both sides to avert incidents during aggressive patrolling of the disputed borders spanning over 4,000 kms.