In Sukma, Rajnath Singh urges Maoists to lay down arms

Rajnath visited Sukma and inaugurated the first fortified police station of the state in Dornapal. 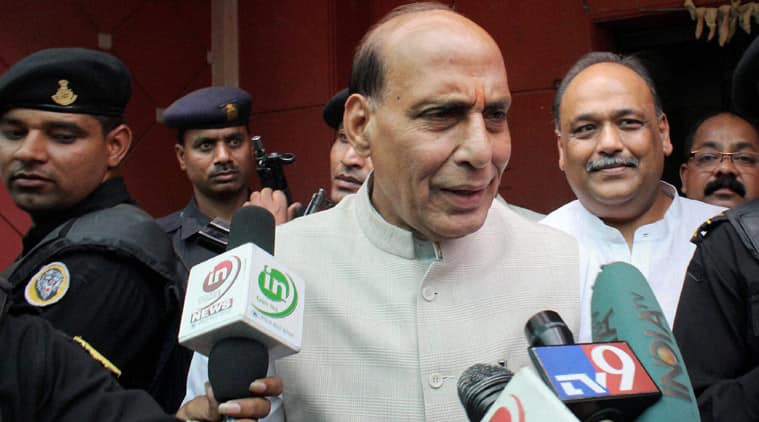 Rajnath was accompanied by Chief Minister Raman Singh and other senior officers.

Home Minister Rajnath Singh on Sunday urged Maoists to drop their weapons and come back to the mainstream.

Speaking at a public meeting in Chhattisgarh’s Sukma, he said: “The Maoist challenge is a big challenge. They want to stop development. But we have taken a vow that we will establish peace in the region.” He added: “I am glad that I am the first home minister to visit Sukma. I will also visit in the future.”

On Sunday, the last day of his two-day Chhattisgarh visit, Rajnath visited Sukma and inaugurated the first fortified police station of the state in Dornapal. It is among 75 such stations being constructed in the state from the central funds. He also flew to the Chintagufa police camp, located near Tadmetla, where Maoists had killed 76 personnel in 2010. Rajnath was accompanied by Chief Minister Raman Singh and other senior officers.

On Saturday, the Home Minister had inaugurated the new police headquarters in Naya Raipur and a police sports complex in Raipur. During his address to officers, he applauded the state police for carrying out the battle against Maoists. He also held a meeting with senior officers and discussed modalities for tackling the rebel issue.

“The Home Minister visited our camps, interacted with our personnel and took stock of the anti-Maoist operations. He has expressed satisfaction. He has promised us all help from the Centre against Maoists,” ADG(Naxal Ops) RK Vij said.