IB report to PMO: Greenpeace is a threat to national economic security

The IB report claims Greenpeace’s “funding of research bodies” is a “massive effort” that has not attained high visibility so far. 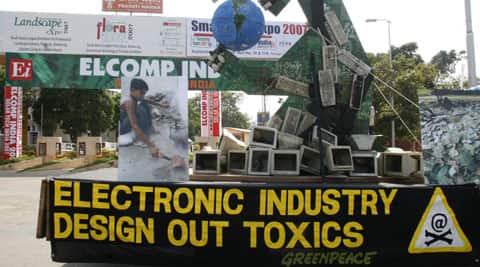 The allegations are part of the IB’s report, dated June 3, submitted to the Prime Minister’s Office.

An Intelligence Bureau report on foreign-funded NGOs “negatively impacting economic development” in India has called Greenpeace “a threat to national economic security”, citing activities ranging from protests against nuclear and coal plants and funding of “sympathetic” research, to allegedly helping out an Aam Aadmi Party candidate in the recent Lok Sabha elections.

The allegations are part of the IB’s report, dated June 3, submitted to the Prime Minister’s Office. As reported first by The Indian Express, the IB claims the negative impact of the NGOs’ role on GDP growth to be “2-3 per cent per annum”.

The report, signed by IB Joint Director S A Rizvi, accuses Greenpeace of contravening laws to “change the dynamics of India’s energy mix”. The bureau says Greenpeace’s ‘superior network’ of numerous pan-India organisations has helped conduct anti-nuclear agitations and mounted “massive efforts to take down India’s coal fired power plants and coal mining activity”. Greenpeace will take on India’s IT sector over e-waste among other “next targets”, the report says.

While several NGOs are named in the IB’s 21-page report, that lists seven sectors/projects that got stalled because of NGO-created agitations against nuclear power plants, uranium mines, coal-fired power plants, farm biotechnology, mega industrial projects, hydroelectric plants and extractive industries, the main international one singled out for criticism is Greenpeace.

Throughout, the IB report sees Greenpeace as the prime mover of mass-based movements against development projects. “It is assessed to be posing a potential threat to national economic security… growing exponentially in terms of reach, impact, volunteers and media influence,” it notes. The efforts are focused on “ways to create obstacles in India’s energy plans” and to “pressure India to use only renewable energy”.

The report also accuses Greenpeace, “actively aided and led by foreign activists visiting India”, of violating the provisions of the Foreign Contribution (Regulation) Act of 2010 (FCRA), and financing “sympathetic studies” at the Tata Institute of Social Sciences (TISS) and at IIT-Delhi.

While FCRA provisions debar organisations getting foreign funding from political activity, former Greenpeace consultant Pankaj Singh stood as an Aam Aadmi Party candidate from Sidhi Lok Sabha seat in Madhya Pradesh in the recent general elections. Mahan coal mines, against which Greenpeace has been protesting, fall under this constituency.

The IB report says that Singh’s organisation Mahan Sangharsh Samiti, which is leading the agitation in Singrauli district against both public and private sector coal mines, received regular funding from Greenpeace. Singh is the Samiti’s co-founder.

Singh, however, denied any truck with Greenpeace. “I do not know who is telling you this, but we have no connection with them.”

Responding to an e-mail from The Indian Express, Bharati Sinha, communication director at Greenpeace, said, “To take part in political activities for elections, Greenpeace employees or consultants have to resign from the organisation… Singh followed the same principle.”

She added that Greenpeace “does not support any political party, but engages with all”.

The IB report claims Greenpeace’s “funding of research bodies” is a “massive effort” that has not attained high visibility so far. “To encourage Indian-ness of its anti-coal approach, Greenpeace has financed Tata Institute of Social Sciences to study health, pollution and other aspects at Mahan and plans to use this case to ban all coal blocks,” it says.

TISS told The Indian Express in an e-mail that it needed more time to give information on the issue.

On the issue of coal, the IB report further says that since 2010-11, Greenpeace has gradually expanded its activities to oppose coal-fired power plants and associated mining. In March 2013, the IB notes, Greenpeace and the Urban Emissions Conservation Action Trust published a “questionable technical report which claimed 1,00,000 deaths in FY 12 due to health problems arising from 111 existing coal-fired power plants in India”.

Greenpeace refused to answer questions regarding funding of “sympathetic studies”, adding: “Through our fight in Mahan for a single coal block, we hope that the new government uses innovative thinking and bold measures to take India away from dependence on dirty coal and dangerous nukes… India surely needs to grow, but India also needs to play its part in keeping global temperatures from growing (more than) two degrees.”

Among Greenpeace’s “future threats”, the report talks of the organisation renewing its campaign internationally to highlight that Indian IT/ITeS firms do not meet global standards on e-waste emissions.

Greenpeace Bangalore has focused its attention only on Indian IT firms while staying mum on multinational IT firms, the report says.

Asked about the source of funding of Greenpeace, Sinha said: “Greenpeace is an independent campaigning organisation that does not accept any donation from corporate or government entities. In the year 2013-2014, Greenpeace India raised around Rs 20 crore from over 3 lakh individual supporters in India.”