How and why PM’s advisor defended gas price formula

Rangarajan explained his approach to CPI MP Gurudas Dasgupta — his petition on the subject is in the Supreme Court. 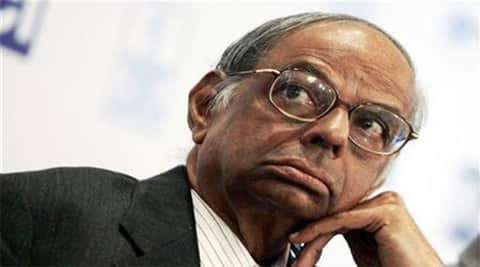 Rangarajan, appointed by the Prime Minister in April 2012 on Reddy’s request for a re-look at exploration contracts and suggest alternative models, opted for shifting to revenue sharing. (Reuters)

The FIR ordered by the Delhi government against two petroleum ministers Murli Deora and Veerappa Moily and Reliance Industries for a future spike in natural gas seems oblivious to the role of former minister Jaipal Reddy in seeking expert advice to shore up India’s energy security, and that of C Rangarajan, head of the PM’s Economic Advisory Council, who came up with the pricing formula to energise the hunt for domestic oil and gas.

Rangarajan, appointed by the Prime Minister in April 2012 on Reddy’s request for a re-look at exploration contracts and suggest alternative models, opted for shifting to revenue sharing from the current cost-recovery fiscal regime.

And for that shift, it recommended linking the price of domestically-produced gas to an average of international benchmarks such as US Henry Hub and the average well-head price at which India imports gas.

Rangarajan explained his approach to CPI MP Gurudas Dasgupta — his petition on the subject is in the Supreme Court — who had alleged that the expert panel recommended doubling of price to $8.4 per million British thermal units even though the actual cost of production in 2011-12 was $2.74 per mBtu.

In his rebuttal to Dasgupta’s letter last August, Rangarajan wrote that the prime concern was shoring up India’s oil and gas output which required moving to the revenue-sharing regime.

“A cost-based pricing of gas would be inconsistent with the new investment regime recommended for new production sharing contracts by the committee. A cost-based regime also gives no incentives for effecting improvements in efficiency for cost-reduction,” says the rebuttal from the Prime Minister’s Office.

It argued that the cost-plus method, as suggested by Dasgupta, was not provided for even under the current contracts which permitted an arm’s length pricing. Secondly, such a system was prone to goldplating of costs that led to disputes and delays and made the investment climate “less attractive”.

A CAG report had alleged that the oil ministry had not enforced contracts effectively and had overlooked lapses, including goldplating at Reliance Industries KG-D6 field, that adversely impacted the state’s share of profit from fields.

More importantly, the EAC’s rejoinder adds, that it was not possible to correctly estimate the production cost not just because of the geological risks but also because of the possibility that an operator could strike success in one well but flounder in another.

“Market prices however take into account such geological risk and build in sufficient returns in the price of gas produced from successful exploration and production projects to compensate for failed ones over different territories and time,” it says.

The EAC’s response to Dasgupta’s letter to PM was that the expert panel attempted to commit the government to a “competitive arm’s length price” as the basis for valuing the gas whose revenue earnings would be shared between the producer and the government.

The panel accepted the principle of linking domestic gas with the price of substitute — imported liquefied natural gas – but only after excluding liquefaction, transportation and re-gasification charges.

It then suggested a simple average of India’s actual LNG import price and those prevailing at various LNG trade points to incentivise output from marginal fields, including that of state-run ONGC, that were unviable at the current price.

It suggested that the prices and volumes for the trailing 12 months period be used for monthly price revision but the ministry later changed it to a quarterly revision.
The new pricing formula, notified on January 10, is effective from April 1, which also coincides with the end of the five-year gas pricing fixed by the Empowered Group of Ministers for KG-D6 gas in 2007 but applied from the day first gas flowed in April 1, 2009.