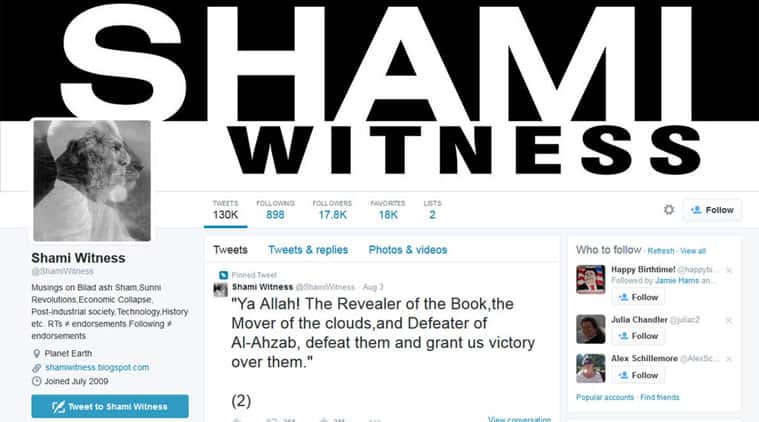 Outed by UK’s Channel 4 as the man behind @ShamiWitness, the pro-jihadi Twitter handle followed by thousands of Islamic State supporters, and with the police closing in, Mehdi Masroor Biswas, 24, has begun to panic.

In a shaky voice, Biswas told The Indian Express from Bangalore, where he works for a giant food conglomerate, that his claims to Channel 4 about his support for IS — and its executions  and beheadings — was a ruse to get the reporter off his back. 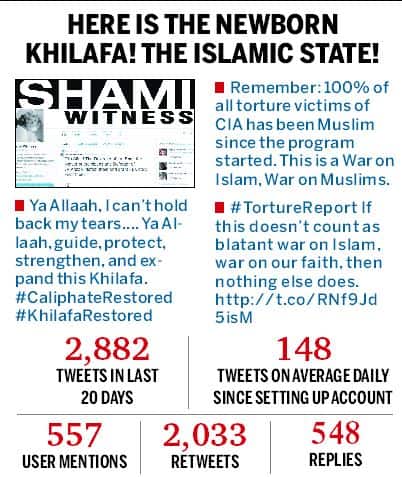 On Friday morning, India had woken up to a report from the British public-service television broadcaster which said that they had tracked down the man behind the popular @ShamiWitness, an articulate and prolific tweeter who is seen across the world as an authority on Islamic State, the jihadi group that now controls large parts of Syria and Iraq.

His name is Mehdi, and he is from Bangalore, the report said. They tracked him down, they said, after discovering that @ShamiWitness had used a personal email address, ElSaltador@gmail.com, to set up a personal Twitter account, @ElSaltador.

“When Channel 4 called me first and asked if @ShamiWitness was my Twitter handle, I did not oppose it… my outright rejection would not have convinced them. I therefore decided to admit that I was indeed @ShamiWitness in the hope that they would not air the programme,” Masroor told The Indian Express.

“But I am telling you that I am not @ShamiWitness. Somebody must have hacked my email account which I used as ElSaltador@ gmail.com and used it to upload stuff. I have been framed. Someone must have planted this,” he added.

“I am not a member of any organisation that should evoke suspicion. I go to office and return to my residence… I have not told my office about these developments and the interview so that they don’t get the wrong impression and complicate matters,” he said.

Masroor added that he joined this company (name withheld) “in June 2012 as an in-plant trainee and was absorbed as a manufacturing executive and confirmed in service in March 2013. I am happy in my job.”

In Kolkata, at Masroor’s Kaikhali home in Biman Nagar, his parents are also tense. They came to know about the furore over @ShamiWitness only when this reporter approached them for an interview.

Masroor’s father, Dr. Mekail Biswas, practises homoeopathy after retiring as an assistant engineer of the West Bengal State Electricity Board. His mother is a housewife who often visits her son in Banglaore – she says she was with him just a few days ago.

“You know being Muslim, we are easily identified as terrorists,” said Dr Mekail. “The days are so hard now. But I can tell you that my son in innocent and has done nothing wrong. If he has landed in trouble it is because some enemy is after him.”

Following the stir created by Channel 4, the police net was closing in, although intelligence sources said they had not found any direct link between @ShamiWitness and Islamic State.

By evening, officials from central police agencies reached Guru Nanak Institute of Technology at Nilgunge Road in Panihati, Sodepur, in the northern outskirts of Kolkata, where Masroor had graduated in Electrical Engineering two years ago.

There, the institute’s registrar A Chakrabarty told the investigators that over 2000 students graduated from the institute every year and it was difficult to recollect this particular name. The policemen left, taking with them a photograph of Masroor.