Odisha and Andhra Pradesh braced for widespread devastation as a cyclone as big as India itself roared towards the coast,on course for landfall near Gopalpur in Odisha’s Ganjam district.

9:20pm: Cyclone Phailin- eye of the storm will take another 1 hour to cross over.

9:15pm: Cyclone Phailin to remain severe for next 6 hours,rains to continue for next 24hrs in coastal regions.

6:25: At least 10 flights of Air India,Indigo and Jet Airways scheduled to arrive or take off from the airport here remained cancelled,director of Biju Patnaik International Airport Sarad Kumar said.

4:24pm: Over 4.25 lakh people in Odisha and one lakh in Andhra Pradesh have been evacuated,says Home Secretary Anil Goswami.

3.45pm: At least three persons died after uprooted trees fells on them in Odisha ahead of Cyclone Phailin’s landfall at Gopalpur.

3.20pm:In view of Cyclonic storm Phailin Cabinet Secretary directs all agencies to be on full alert to minimize damage,and loss of life and property.

1.45pm:Cyclone Phailin is now 150 kms away from Gopalpur in Odisha,IMD says.

1.40pm:East Coast Railway have cancelled all trains between Howrah and Vishakhapatnam as a precautionary measure in view of cyclone Phailin.

1.00pm: 18 fishermen were reported to be trapped on a trawler near Paradip in the sea. However,they could not be rescued as the sea was extremely rough.

12.30pmThe ‘very severe’ cyclonic storm is 200 km off the Gopalpur coast which will be the centre of the cyclonic system,reports said.

The MeT department said that the cyclone,with wind speed of 210-220 kmph,is expected to hit the coast from 6 to 8 pm today and is likely to stay for six hours before moving ahead. Wind speed could reach up to 240 kmph at a later stage.

12.20pm: Cyclonic storm Phailin will cause extensive flooding and crop damage in Ganjam,Khurda,Puri and Jagatsinhpur areas of Odhisha and Srikakulam of Andhra. 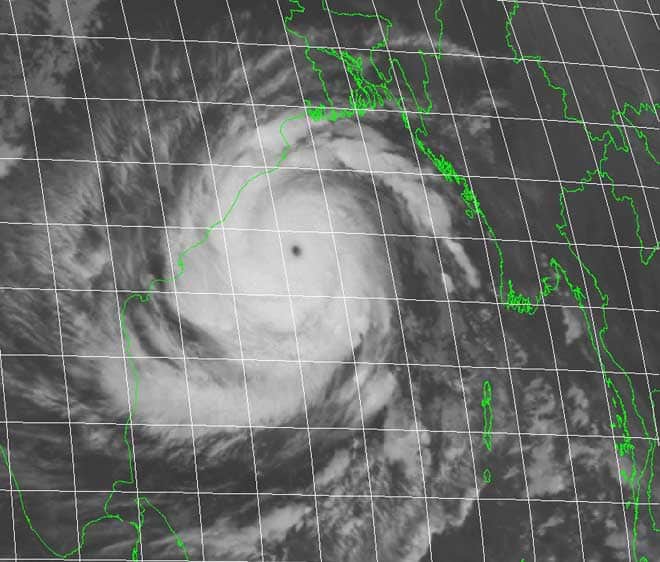 11.45:The Odisha government has evacuated 2.5 lakh people from six coastal districts. Of the 2.5 lah people,one lakh people alone have been taken to safe place at Gopalpur.

11.15am: Cyclonic storm Phailin will hit the coast near Gopalpur in Odisha with maximum wind speed at 240 kmph,said IMD.

Moving closer,Phailin is currently positioned just 260 km off the coast of Gopalpur,which is likely to be epicentre of the storm,the MET department said.

10.40am: As many as 52,000 locals were on Saturday evacuated and 25,000 people accommodated in cyclone shelters in Srikakulam district.

10.00am: Gale winds with speed of 90 kmph prevail along coastal Andhra Pradesh and Odisha. The wind speed is likely to increase up to 150 kmph from noon,says Met Dept update.

9.40am According to MeT department, cyclone Phailin will remain a severe storm ever after its landfall. Very heavy rainfall is predicted at places in Odisha and Andhra Pradesh in next 6 hours.

Muslims and Hindus gathered at mosques and temples in Odisha state,praying Cyclone Phailin would not be as devastating as a similar storm that killed 10,000 people 14 years ago.

9.15am: Cyclone Phailin with wind speed of 310 kmph is now centered at 210 km from coast of Odisha and Andhra Pradesh,MeT department said.

9.00am: The India Meteorological Department (IMD) predicted wind speeds of 210-220 km/hr at the time of landfall,as the ‘very severe’ cyclonic storm lay centered over westcentral and adjoining northwest Bay of Bengal,about 260 km southeast of Gopalpur,270 km east-southeast of Kalingapatnam and 310 km south-southeast of Paradip. In an early morning bulletin,the IMD said the cyclone would move northwestwards and cross north Andhra Pradesh and Odisha coasts between Kalingapatnam and Paradip,close to Gopalpur (Odisha) by Saturday evening.

It predicted heavy to very heavy rainfall over coastal Odisha during next 48 hours and over interior state for subsequent 48 hours.

The strongest cyclone to threaten India in more than a decade barreled towards east coast with 220 kmph wind and is likely to hit Odisha and Andhra Pradesh on Saturday evening, as authorities bused and trucked tens of thousands of villagers from their mud and thatch coastal homes to government shelters inland.

Memories of the 1999 super cyclone,however,fueled widespread panic across a vast swathe of southern Odisha.

Odisha government has set up control rooms to make available information. The helpline number of the Odisha Central Control Room is 0674-2534177.

Phailin near the size of Katrina

US meteorologists said the storm is flirting with historic power.

“You really don’t get storms stronger than this anywhere in the world ever. This is the top of the barrel.”

To compare to killer US storms,McNoldy said Phailin is near the size of 2005’s Hurricane Katrina,which killed 1,200 people and caused devastating flooding in New Orleans,but Phailin also has the wind power of 1992’s Hurricane Andrew,which had 165 mph (265 kph) winds at landfall in Miami.

The storm shows no sign of weakening and has an impressive eye,said Ryan Maue of the private weather firm Weather Bell. He called it a “critically dangerous situation with a rare Category 5 landfall,” which he said in that region has a history of being catastrophic.

A TROPICAL CYCLONE Is a rotational low pressure system in tropics when the central pressure falls by 5 to 6 hPa from the surrounding and maximum sustained wind speed reaches 34 knots (about 62 km/h). It is a vast,violent whirl of diameter 150 km to 800 km,spiraling around a centre and progressing along the surface of the sea at the rate of 300-500 km a day.

A FULLY DEVELOPED Tropical cyclone has a central cloud-free region of calm winds,known as the eye of the cyclone,with a diameter varying from 10 to 50 km. Surrounding the eye is the wall cloud region characterised by very strong winds and torrential rain,which is about 10-150 km wide. Winds over this region rotate around the centre and resemble the coils of a snake. Wind speed falls off gradually away from this core region. The height of the cyclone is about 15 km. A mature cyclone releases energy equivalent to that of 100 hydrogen bombs.

Comes from the Greek cyclos,meaning coiling of a snake. It was coined by Heary Piddington who worked as a rapporteur in Kolkata during the Raj. Tropical cyclones over the Atlantic are called hurricanes; those over the Pacific are called typhoons.

Wind Speeds,mentioned by theIndia Meteorological Department (IMD),is the strongest surface wind speed in a three-minute cycle within the cyclonic system at the standard height of 10 m (33 ft) in an unobstructed exposure. US National Hurricane Centre uses 1 minute averaging time for reporting sustained winds.

Ocean,tropical cyclones haveaverage radiuses of 300-600 km. The smallest ones have radiuses of between 50 km and 100 km,and the largest can have a radius of up to 2,000 km.

Ever to hit India was the Orissa supercyclone,which crossed the Orissa coast near Paradip on October 29,1999. It had an estimated sustained maximum surface wind speed of about 140 knots (260 km/h) at the time of landfall. The lowest estimated central pressure was 912 hPa.

LIFE OF A CYCLONE

Over the North Indian Ocean is 5-6 days. It has hurricane intensity for 2-4 days,as against the global average of 6 days. Two tropical cyclones that survived 14 days each in 1886 and 1964 were the longest lived tropical cyclones in Indian seas.