Heat wave in India: Everything you need to know

Here's everything you need to know about the heat wave and its impact in India. A man pouring water on his face during a hot summer day in Hyderabad, Sunday, May 24, 2015 (AP photo)

India’s infamous tropical temperatures are making news once again. Over the past few weeks, a searing heat wave has gradually taken control over most parts of the country, killing hundreds of people and making lives uncomfortable for others. Photographs and ground reports indicate that farmers and daily wage labourers, who work in the construction and transportation sectors, are the worst-hit as their profession demands them to work in the sun for most part of the day. From crop failures to power outages and human hazards, heat wave conditions can wreak havoc.

As the scorching summer season shows no sign of ebbing away, here is all that you need to know about the deadly heat wave and its impact in India.

Which are the worst affected states?

Andhra Pradesh and Telangana, the two southern states, which have recorded more than 600 deaths and 200 deaths respectively due to the heat conditions are the two worst affected states. The AP state government has advised people not to venture outside from 11 am to 4 pm — the time when the sun is at its peak. It is reported that district authorities are supplying drinking water and buttermilk along roadsides and national highways in order to help motorists quench their thirst. Temperatures on Tuesday were at their peak in some of the Telangana districts -Warangal (46 degrees celsius), Karimnagar (45 degrees censius) and Nizamabad (44 degrees celsius). 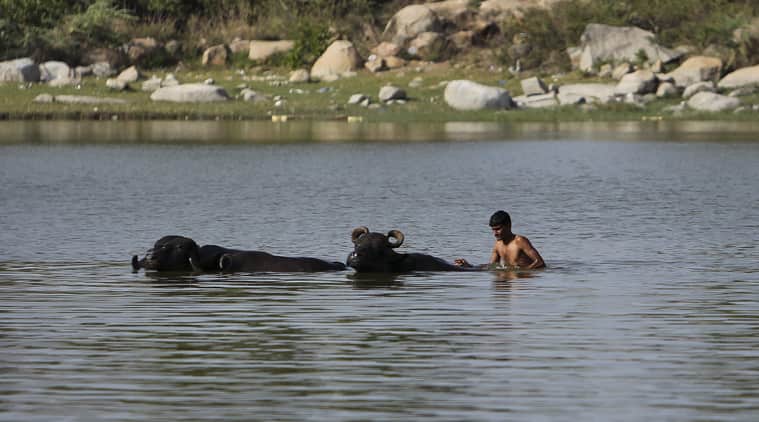 A man taking his buffaloes for a bath to provide relief from the heat at a pond in Hyderabad, Andhra Pradesh (AP photo)

What are the possible health hazards due to heat wave?

According to the National Health Service based in UK, heat stroke and heat exhaustion are the two major risks posed by high-temperature conditions. Continuous and constant exposure to high temperatures could result in nausea and heat cramps, resulting in rapid rise of the body temperature. Dehydration (absence of adequate water within the body) could also aid in heat exhaustion. Headaches, dizziness and nausea are some of the symptoms.

When is the monsoon due?

As the heat conditions continue, news of the arrival of monsoon is on everyone’s minds. India had witnessed unseasonal rains back in March which resulted in severe crop loss especially in states like Punjab, Maharashtra and Madhya Pradesh. However, our southwest monsoon is not delayed at all. In fact, it is ahead of time. The trade winds which bring plenty of rain to India are expected to hit Kerala on May 30, the Met department said. But due to the El Nino phenomenon, it is predicted that the amount of rainfall would be less. The map showing the dates on which the monsoon is likely to hit different parts of India (Source: Meterological Department of India)

This map by the Met Department shows clearly as to when the monsoon is likely to reach different parts of the country. For the two critical states of AP and Telangana, monsoon is likely to come between June 5 and June 10. As for Delhi and other parts of north India, they will have to wait till the 1st week of July for the first rains.

Is there enough water in our reservoirs?

With the monsoon predicted to be below normal, our reservoirs across the country are important as they are a source of drinking water as well as for irrigation and electricity purposes. Data from the Central Water Commission this year show that our reservoirs, thankfully, are in good shape. The 91 major reservoirs have about 45 billion cubic metres of water in them, which is about 28 per cent of the total capacity of these reservoirs. Data also show that reservoirs in the northern and eastern India are better filled than those in the south. This graphic gives a good representation of the data.

Tips to battle the heat wave

1. The best tip of course, is to stay indoors and avoid the sun especially during the afternoons (from 11 am to 4 pm). Air conditioners and coolers are most helpful during this period.

2. In case, one needs to go out, wearing a cap and loose clothing is the best way to prevent sun strokes.

3. Drink lots of water and fluids. If you’re at home, fruit juices and chilled milk smoothies are the way to go.

4. Carry medicines if you venture out for trips and vacations.