Bajrangi had been convicted in the 2002 riots case, in which 97 peoplewere killed. 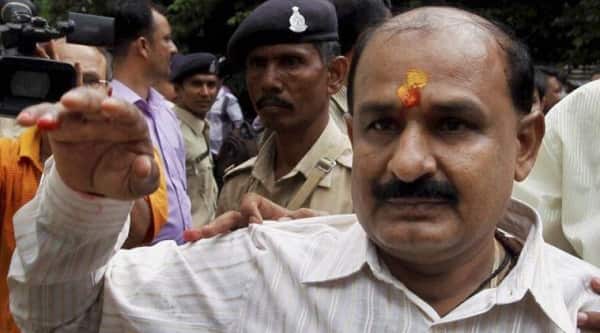 A special trial court had sentenced him to remain in jail till death. (Source: PTI/file)

The Gujarat High Court on Tuesday refused to grant temporary bail to 2002 Naroda Patia riots case convict Babu Bajrangi, who sought one week’s release for  the treatment of his ailing son.

The High Court said that the disease of the applicant’s  son is not critical and can be cured, so the temporary bail in this condition can be ruled out.

Bajrangi’s wife Meena Patel appeared on his behalf before the court and submitted that their son Viren is suffering from chest pain and has been hospitalised for one week.

To ensure proper treatment of their son, Bajrangi needs to be come out of the jail for a period of one week, she contended before the High Court.

However, the state government opposed the bail plea and submitted that Bajrangi’s son is not critical and therefore, the convict in Naroda Patia case cannot be granted temporary bail.

Bajrangi is at present lodged in Sabarmati Central Jail here.

Earlier, he had been granted bail by HC four times for his own treatment and that of his wife and father.

Bajrangi had been convicted by a special trial court in the 2002 riots case, in which 97 people from the minority community were killed in Naroda Patia area of the city on February 28, 2002.

The court had sentenced him to remain in jail till death.