Speculation had been rife for a few weeks that Kapur was on her way out of the PIB.

The Narendra Modi government on Friday took action against two senior Indian Information Service officers, transferring Press Information Bureau’s Principal Director General Neelam Kapur and putting the services of DD News’ Director General S M Khan on “compulsory wait”.
While Kapur had alleged “run-ins” with a minister over several issues — including one relating to sending dinner invites to the media without his name on it — Khan had faced heat for allowing the editing out of portions of Narendra Modi’s interview to Doordarshan during the election campaign.

Kapur, a 1982-batch IIS officer, had been the government’s senior most spokesperson ever since her appointment as Principal Director General (Media and Communication) in the PIB in April 2009. She has now been transferred to the Directorate of Field Publicity. The current DG of Directorate of Field Publicity, A P Frank Noronha, has been appointed as the  PIB’s new Director General (Media and Communication). Noronha confirmed to The Indian Express that he had already taken over charge of his new post.

While Kapur’s transfer is primarily being attributed to the Modi government’s perception of her being close to the previous regime, there were murmurs in Shastri Bhavan of late that a few recent “run-ins” between her and Information & Broadcasting Minister Prakash Javadekar eventually led to her transfer.

One particular instance of such a run-in was when Javadekar reportedly did not take too kindly to Kapur sending out dinner invites to the media on her own behalf and not the minister’s. With some invites already having gone in Kapur’s name, Javadekar’s office then sent out fresh invites on the minister’s behalf for the same dinner.

Speculation had been rife for a few weeks that Kapur was on her way out of the PIB. Sources said the handing over of the charge on Friday was effected rather suddenly and Kapur, who had already left office for the day, was called back to relinquish charge.

DD News’s DG Khan, who was in the eye of a controversy during the recent general elections for having allegedly “supervised” editing out of several portions of Modi’s interview to Doordarshan, had reportedly earned the wrath of the new dispensation in the past few weeks.  Sources said the government was not satisfied with the way news was being “selected”and “aired” on DD News and the axe was waiting to fall on Khan. Sources said ever since the new government took over, it felt that there had been many instances where news that showed it in poor light was getting far more attention on DD News. 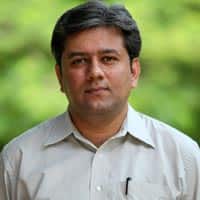