Jairam Ramesh accused NDA government of turning the programme to clean Ganga as a 'Hindutva project'. 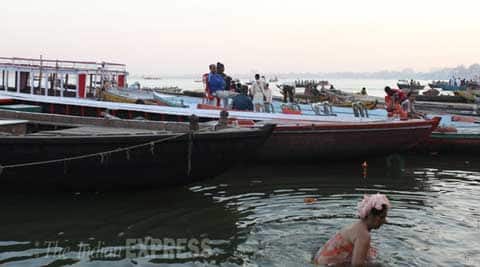 Government is in the process of preparing a compact plan to rejuvenate river Ganga. (Source: Express photo by Apurva Singh)

With the aim of cleaning and rejuvenating the Ganga river, the Centre is organising a national level meet – ‘Ganga Manthan’ on July 7 where spiritual leaders, policy makers, NGOs and environmentalists will mull over the matter.

Meanwhile, Union Water Resource Minister Uma Bharti has said the River Ganga rejuvenation programme would not be successful without cleaning up of river Yamuna. The Minister said that even if the programme is called River Ganga rejuvenation project, cleaning up of river Yamuna will also be included in it. The government has plans to rejuvenate both the rivers, Bharti said, adding the country will prosper only when the two rivers are made pollution-free.

Aimed at bringing all the stakeholders on a single platform, the one-day meet, named ‘Ganga Manthan’, will gather people from various walks of life and draw ideas that will give a better insight for framing a strategic long term policy for restoration of the Ganges.

Representatives of various ministries including those from Water Resources, River Development and Ganga Rejuvenation, Shipping and Tourism, and other stakeholders would participate in the meet.

The meet would begin with a session where all stakeholders will gather together, followed by four separate parallel sessions for saints and spiritual leaders, NGOs and environmentalists, academicians and technocrats, and public representatives and administrators.

A combined session, where views and ideas discussed in the parallel sessions would be shared to facilitate formulation of a long-term strategy, will conclude the meet.