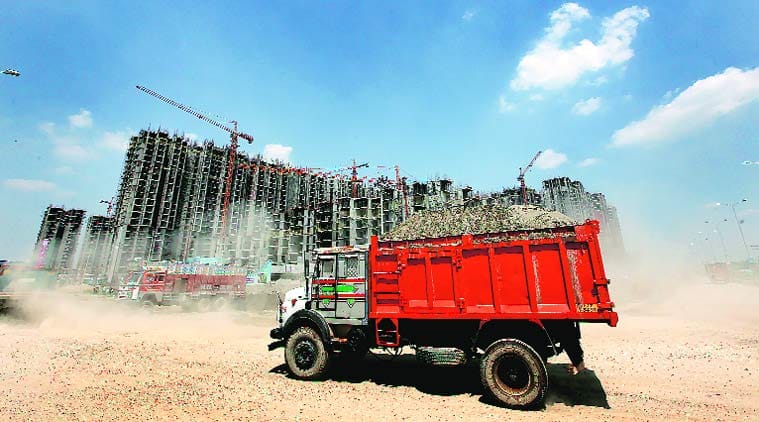 Stating that a citizen’s “right to live” must not be compromised for “small economic gains”, the National Green Tribunal has ordered a complete halt from Saturday to construction activity in Delhi and the National Capital Region, including Gurgaon and Noida, that does not adhere to the latest environment norms.

While issuing a fresh set of orders to curb dust emission at building sites (see below), the NGT bench on Friday asked authorities to stop all activity that does not follow the environment impact assessment guidelines issued in 2010 by the Union Ministry of Environment and Forests, including construction by the Delhi Metro Rail Corporation and all government agencies.

It ruled that agencies must ensure compliance of guidelines while giving “sanction of land” and added that anyone — owner or builder — who violated regulations would be fined Rs 50,000. Besides, those found violating norms while transporting construction debris or material would have to pay a penalty of Rs 5,000, it added.

“By tomorrow all builders who have not taken all the precautions under MoEF 2010 guidelines, their work must be stopped,” the NGT bench ruled. It observed that if unregulated construction activity was stopped at some sites, “the rest will fall in line”.

The Tribunal’s order comes close on the heels of a series of investigative reports by The Indian Express one of which identified unregulated construction as one of main factors that led to Delhi’s air turning toxic over the last seven years.

The NGT bench, while hearing a plea on the rising air pollution in Delhi, had on Tuesday ordered that diesel vehicles over 10 years old be barred from plying on the roads of Delhi and NCR. Today, it rejected a plea from the Delhi government to exempt ambulances and fire engines from that list.

A surge in the use of diesel, which releases a number of cancer-causing chemicals in the air, was another factor identified by this newspaper as a reason for a record spike in the lethal dust called respirable suspended particulate matter (RSPM) in Delhi’s air, making it the most polluted city in the world.

While noting that development activity was an “essential feature of a developing country”, the bench said that when such activity is carried out in violation of the principles of “sustainable development”, there is a “disastrous” impact on the “environment and ecology of the area” leading to “issues of public health”.

It noted in its order that dust emissions from “construction activity, transportation of construction material, construction debris waste and… mining activity” could have “dangerous dimensions” when construction is carried out “rampantly” and in an “unregulated manner”.

“The stakeholders, for short economic gains, do not take environmental preventive and protection measures prescribed under laws, exposing not only their workers but the entire population of the area to a variety of diseases some of them even life-threatening,” the NGT said in its order.

It added that it was the “social and corporate responsibility of all builders to carry on construction activity” in accordance with norms.

“They must ensure that for small economic gains, they do not expose the public, including their purchasers and workers, to serious diseases and adversely affecting the public health at large. The constitutional right to life, decent and clean environment has to take precedent over the right of an individual to carry on business activity,” said the order.

The NGT bench also said that it was the “obligation” of builders to ensure that all workers wore masks and that any medical expense arising out of pollution at construction sites be paid for.

As for the Delhi Government’s request to exempt ambulances and fire engines from the 10-year diesel vehicle cap, the bench asked it to move a “data-based application”. It said that it would not change its orders, but would “analyse everything”.

1. Scaffolding around building to be covered with tarpaulin

3. Construction material must be covered on the site and also during transportation

4. Workers to be provided dust masks