From the drought zone: Sugarcane becomes fodder for Maharashtra’s farmers

Growers see more value in supplying for cattle than mills. At 10 in the morning, Vishwas Bhimrao More steps into his six-acre sugarcane field, sickle in hand. After three hours of labour, this 35-year-old farmer from Siddheshwar Wadgaon village in Osmanabad’s Tuljapur taluka makes bundles of his harvested dry crop for selling in the market as fodder.

More had invested Rs 1.5 lakh on planting his cane in December-January and taken a Rs 3 lakh bank loan for tending it thereafter. But the monsoon’s failure dwarfed the growth of the crop by a third or more. The saving grace, if any, has been the severe fodder shortage resulting from the drought: It has created a market for dried cane, now selling at Rs 2,000-2,500 per tonne, which is more than the Rs 1,800-2,000 per tonne price that sugar mills paid in the 2014-15 season (October-September). And unlike the mills, the payments for fodder cane are on the spot. 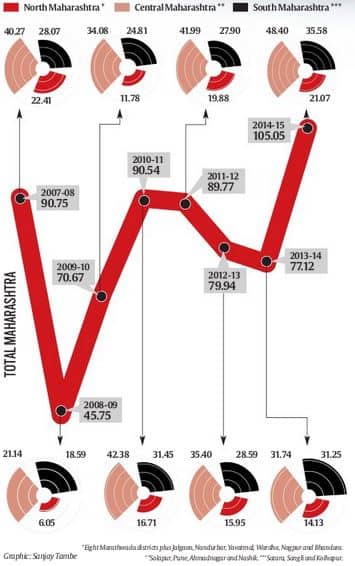 “My cane was completely burnt. Now, I can use at least some of it to feed my four cows and sell the rest as fodder for other farmers,” says More.

Normally, it is the top green leaves of the cane left in the field after harvest that gets used as fodder. But currently, farmers are harvesting the immature cane itself for use as fodder. The yield of this poorly-grown cane is only 10-15 tonnes per acre, as compared to 35-40 tonnes from fully mature cane. The lower yields are partly compensated through higher price and instant payment for cane sold as fodder.

At Handogri village of Bhoom taluka, Bapurao Patil has already booked 100 tonnes of sugarcane for the 4,000-odd cattle housed in a 300-acre ‘camp’ being run by him. “I have adequate stock to feed these animals for next two months. But since the cattle numbers are increasing, I need to make fodder provision for the next six months,” notes Patil, whose camp is getting a subsidy of Rs 70 for every cow and Rs 35 per calf from the Maharashtra government. The implications of these are not lost on sugar factory owners.

In the 2014-15 season, the 52 mills in Marathwada crushed 190 lakh tonnes (lt) of cane to produce 19.8 lt of sugar. For the new season, the total cane crushed even before the start of monsoon was pegged at 150 lt, because of farmers planting less on account of lower prices and delayed payments by mills.

BB Thombare, chairman of Natural Sugar & Allied Industries at Kallam taluka of Osmanabad, believes that the monsoon rainfall deficit alone would reduce cane availability in Marathwada by 35-40 lt. In addition, there will be 20-25 lt of cane diversion towards fodder, which leaves hardly 85-95 lt available for crushing by mills.

But it is not Marathwada alone. Even the main cane belt of western/central and southern Maharashtra — especially Solapur and the eastern parts of Sangli, Satara, Pune and Ahmadnagar — have been affected by poor rains.

Sanjeev Babar, managing director of Maharashtra State Cooperative Sugar Factories’ Federation, is for now projecting a 30 per cent reduction in the cane crushed for the 2015-15 season, over the 929 lt that mills in the state processed to produce a record 105 lt of sugar in 2014-15.

However, production falls can be very steep, as was the case in 2008-09 when Maharashtra’s sugar output practically halved to below 46 lt. For a state which produced 37 per cent of India’s 281.08 lt of sugar in 2014-15, that can be fairly significant.

Right now though, there are many imponderables in the way of estimating production for 2015-16. That includes the behavior of the ‘returning’ monsoon — when the rain-bearing winds from the south-west reverse direction — in the second half of September. In the event of it, too, failing, not only could cane yields take a further hit alongside more diversion to fodder, but there may also be a serious issue of water availability for drinking and animals. That would, in turn, make it difficult for even mills to take up crushing operations.

But according to Thombare, mills need water only in the initial 3-4 days, mainly for the boilers to produce steam. Once crushing operations stabilise, factories cane use the water present in the cane itself. Sugarcane has 70 per cent water, which includes 15 per cent in the baggase that is burnt in boiler.

“Out of the remaining 55 per cent water, at least 50 per cent can be recycled for use by the mill. From 5,000 tonnes of cane, you can recover 25 lakh litres, which is more than the mill’s own water requirement,” he claims, adding that most factories in Marathwada have facilities to condense the evaporated vapour during boiling of sugarcane juice.

But the real concern today is whether mills, even if allowed to crush, will have enough cane to crush in the first place.