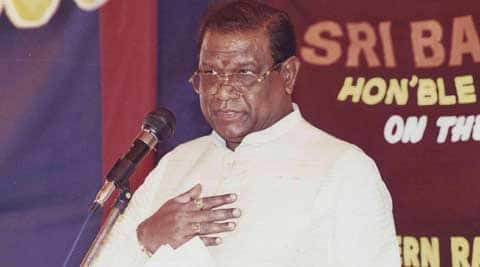 Laxman, who was confined to a wheelchair for the past 12 years owing to poor health, breathed his last at Yashoda Hospital. (Express Archive)

Former BJP chief and senior party leader Bangaru Laxman passed away on Saturday in Hyderbad after a period of prolonged illness.

Laxman, who was to turn 75 on March 17, was confined to a wheelchair for the past 12 years. He was not keeping well for some time due to a kidney ailment and died of cardiac arrest at 5 pm in Yashoda Hospital.

BJP’s president from 2000 to 2001, Bangaru was the target of Tehelka’s first sting operation in 2001 and was shown accepting a wad of currency from journalists posing as arms dealers,resulting in a major loss of face for the then NDA government.

Post the Tehelka sting, he was convicted by a court in 2012 under the Prevention of Corruption Act and was sentenced to four years in jail. A minister of state for Railways in the NDA government, Bangaru was later released on bail and was undergoing treatment in Hyderabad.

Born in a Dalit family in Andhra Pradesh, he joined politics at an early age and was elected to the Rajya Sabha in 1996. He was also jailed during the Emergency in 1975.

Laxman Bangaru is survived by his wife Susheela Laxman Bangaru, who was a BJP member of 14th Lok Sabha and four children.