The trial incineration report, accessed by The Indian Express, shows that emission parameters were monitored during the five-day disposal process which started August 13 afternoon and ended early morning of August. 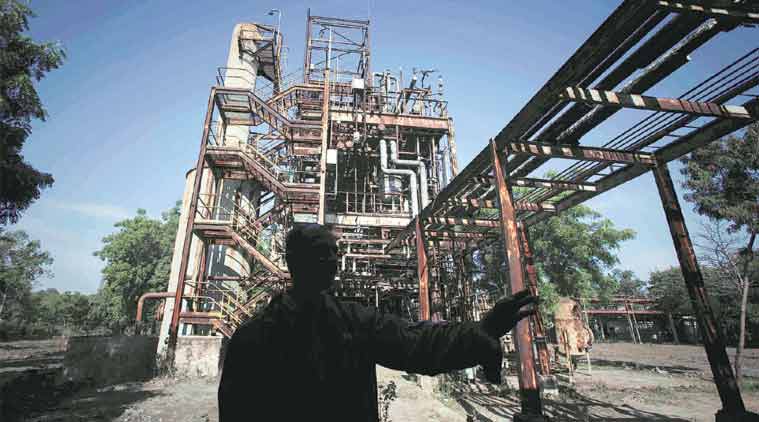 Around 346 tonnes of hazardous waste has been lying in the Union Carbide factory since Dec 1984.

A decade after it snowballed into a constant feud between the government and environmentalists, the first trial incineration of about 10 tonnes of toxic waste from the Bhopal gas tragedy has been completed with officials saying that the level of emissions and ambient air quality from the burning was within permissible limits.

“Trial burning emissions were within limit for particulate matter, sulphur dioxide and nitrogen dioxide. Combustion efficiency results of other parameters are expected in four-five days but we expect them also to be within limits,” said officials associated with the trial.

Ambient air quality was monitored at three locations in and around the facility, including a station representing Tarpura village adjacent to the facility. Besides particulate matter, sulphur dioxide and nitrogen dioxide, the benzene content was also monitored.

The report, including that of stack emissions, is to be submitted to the Supreme Court which, in 2012, selected the Pithampur waste treatment storage and disposal facility (TSDF) in Madhya Pradesh’s Dhar district as the most suitable. Around 346 tonnes of hazardous waste has been lying in the Union Carbide factory since December 1984 when a gas leak killed more than 3,700 people. Its disposal has consistently proved to be a non-starter after a PIL was filed in the Madhya Pradesh High Court for cleanup in 2004.

The trial incineration report, accessed by The Indian Express, shows that emission parameters were monitored during the five-day disposal process which started August 13 afternoon and ended early morning of August

The report says 10.157 tonnes of hazardous waste was burnt at the TSDF facility operated by the Ramky Group Company and monitored by Central Pollution Control Board as well as private firms CVR Labs of Chennai and Vimta Lab of Hyderabad. Environment NGOs had apprehensions over the Ramky facility which, according to them, failed to meet desired safety parameters. In 2014, however, the CPCB submitted an affidavit verifying the suitability of the site to carry out the incineration.

Five types of segregated wastes lying at Union Carbide’s Bhopal premises were collected in proportion to their quantities at the site: 1652 kg of semi-processed residue, 1390 kg of naphthol waste, 1,374 kg of sevin residue, 4,857 kg of excavated waste and 885 kg of reactor residue. The report says the incineration generated an estimated 47,000 kg of asj and residue that will be disposed in secured landfill sites within the facility “post-monsoon”.

The trial waste was transferred on July 25 from the state capital, three days ahead of schedule, as its burning was strongly opposed by environmentalists and locals in the area.

Officials expect the remaining waste to be burnt at the “same place, using the same technology and the same control parameters”.