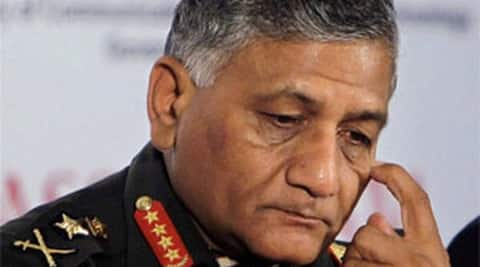 By the time officials in the Defence Ministry received a copy of V K Singh’s petition, news had trickled in, first, via intelligence inputs, of unusual movement of a mechanised infantry unit from Hisar. (PTI)

Expressing concern over the “growing attacks and unsubstantiated charges” leveled against the media by political leaders and public figures dissatisfied with the coverage of their activities or with criticism,

and to keep public discourse civil and within reasonable bounds.

“It is distressing to find a person like Gen V K Singh using the term ‘presstitutes’ to describe journalists who wrote a story on the movement of army units causing concern to the government, a statement unbecoming of a former chief of the Indian army,” the guild said in a statement.

“It is equally disquieting to find Arvind Kejriwal attributing corrupt motives to the media that were critical of him and charging media with being pressured into ignoring him without coming up with specific details or material to substantiate such charges,” the guild added.

Reacting to The Indian Express report quoting the then director general of military operations A K Choudhary that there indeed was alarm at the highest levels of the UPA government in January 2012 over the movement of two Army units near Delhi, V K Singh had on Friday tweeted: “Saw report by  ‘presstitutes’ of IE, hilarious front page justification of Coupta. Confirms who cooked up routine move to denigrate army.”

“I think we could not have had a more sick mind than the one which put out the fable at the behest of someone. They surely need medical assistance to say the least,” the former Army Chief said in a statement later on Friday.

On Sunday, launching his party’s Lok Sabha campaign from Rohtak in Haryana, Kejriwal had alleged that there was a nexus between media organisations and the Ambanis.

“Mukesh Ambani has bought some TV channels and newspapers. They have been told to give extensive coverage to Rahul Gandhi and Narendra Modi. Yesterday, the editor-in-chief of a TV channel met me and said that his bosses wanted him to cut down on Aam Aadmi Party coverage. He said he was going to resign. There is an English newspaper in Delhi whose owners own gas reserves and they have started writing against us,” he had said.

The Editors Guild said the tendency to attack or abuse the media is not restricted to the newer players, and leaders of established parties are not immune to it either. “Ironically, leaders who built up reputations and support by engaging the public through the media are now turning on the very media when they come under critical scrutiny,” the guild said.

“The media that question and criticise political leaders and indeed every section of society should of course be open to criticism, even if it is harsh, of its functioning and to its flaws being exposed. The problem arises, however, when abuse and vague, unsubstantiated accusations of corrupt motives take the place of reasoned refutation and debate. An additional danger is that some of the followers could take their cue from the statements of leaders and may not stop with verbal attacks. Both print and television journalists have been subject to physical violence as well by political party workers,” the guild added.