Death rate goes up with distance from district hospital

Close to 50,000 deaths (from abdominal conditions) could have been averted, finds Lancet study. 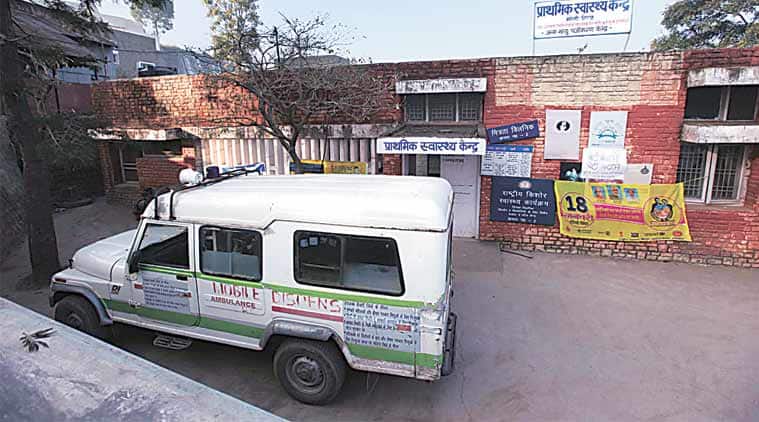 Those living 100 km or more from “well-resourced district hospital” at highest risk.

Better access to district hospitals may have prevented close to 50,000 of the estimated 72,000 deaths in India due to acute or sudden abdominal conditions in 2010, according to a study published in Lancet Global Health journal.

Researchers from the University of Toronto, who mapped district hospitals and reviewed the quality of healthcare in over 3,800 of 4,064 “postal codes” in India, found that “mortality increased with increasing distance from surgical care”, with people living at 100 km or more from a “well-resourced district hospital” at the highest risk.

While conducting the first study of its kind to review deaths before patients reach hospitals in India, the authors extrapolated from Registrar General of India data on population-based deaths from 2001-2003 and national deaths in 2010, and found that only 21 per cent of around 72,000 deaths due to acute abdominal conditions occurred in hospitals.

The study also found that 79 per cent of the total number died due to peptic ulcer.

Commenting in Lancet on the study, Dr Nobhojit Roy from Bhabha Atomic Research Centre in Mumbai noted: “Hospitals in low-income and middle-income countries receive surgical patients late, and usually when they are critically ill. Consequently, high perioperative mortality and poor surgical outcomes are the unacceptable results of the provision of surgical health care in these countries.” 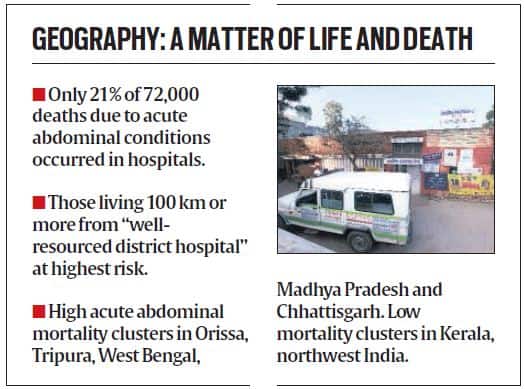 Roy added: “However, the larger problem of the invisible deaths in the community of those who never reached the hospital or died on the way to the hospital remains unknown.”

The authors of the study, including Prabhat Jha, from the Centre for Global Health Research in University of Toronto, and Anna Dare, noted that hospital-based mortality might “significantly underestimate the true mortality burden from deaths from acute abdominal conditions because many deaths occur at home”.

Speaking to The Indian Express, Jha said that “emergency abdominal conditions” should be ideally managed within the first hour, known as the golden hour — previous studies have shown mortality rates increase with every hour after that.

“We have shown that being less than 50 km away from not just any hospital but a well equipped district hospital can reduce your chances of mortality from acute abdominal conditions by two-thirds. In a country like India, improving the capacity of 5,000 district and community hospitals should not be that difficult, it just needs political will. The funds and manpower are already there,” Jha said.

He added that “well-equipped hospitals” included 24/7 hospitals with anaesthetists and blood banks. “A hospital which can manage abdominal emergencies can also manage other emergency surgical conditions better. So the ramifications of these findings are huge especially because 95 percent of India’s population is covered in our study,” Jha said.

“In the absence of access to a motorised vehicle, such distances are challenging if not prohibitive to accessing timely care for surgical emergencies,” the study stated.

Quoting other studies, the authors said that community health centres, which are the “first-level referral hospital”, had gross shortages.

“Our analysis suggests that improving geographical access to surgical care and improving existing hospital level resourcing (both human and physical resources) is needed in India…,” the authors noted. These numbers are indicative of a hospital’s ability to conduct other emergency surgeries.

Roy stated that the authors “do not just plot the geographical distances to health facilities, but qualify this further in their analysis, to show that even if district hospitals are accessible to populations within 50 km, it is only the well-resourced and functional health facility that actually lowers mortality in acute abdominal conditions”.

WHAT THE STUDY FOUND